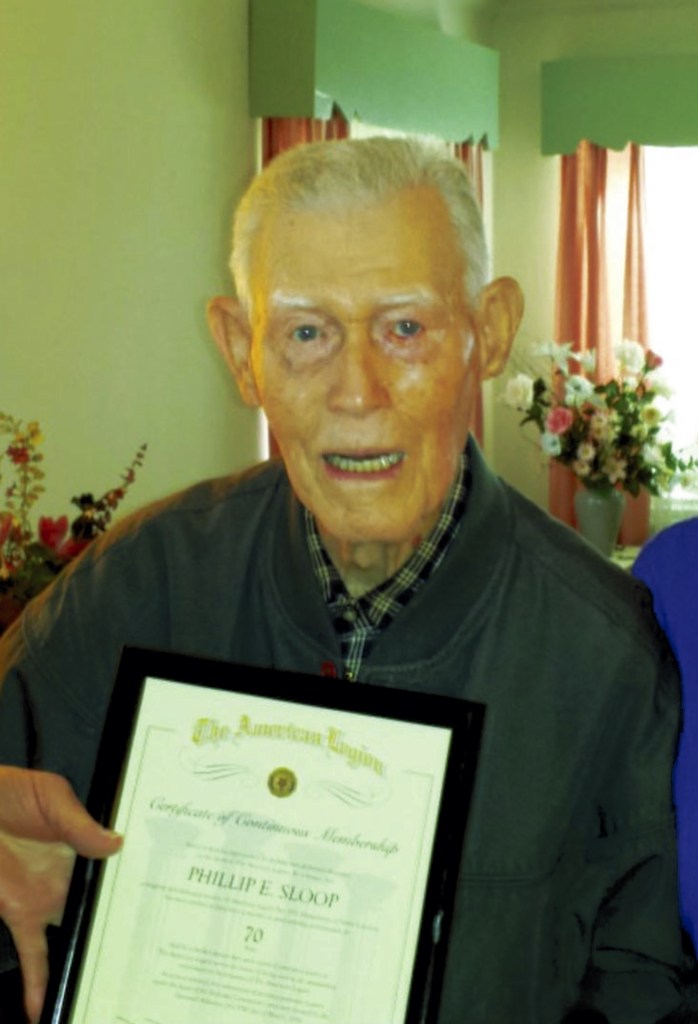 KANNAPOLIS — Phillip E. Sloop was awarded a National American Legion Certificate recognizing his 70 years of continuous service as a member of American Legion Post 115 in Kannapolis. Phillip is a World War II veteran, who is 99 years old. He attended Landis High School in 1934, and worked at Cannon Mills after graduation. He was drafted into the Army Air Corps on April 15, 1941, prior to Pearl Harbor, and before America’s entry into the war.

He was hoping that he would be furloughed into the Army Reserve as an early draftee and be sent back home for Christmas. However, before his training was completed, Pearl Harbor was bombed by the Japanese on Dec. 7, 1941, and he was sent overseas. He was assigned to the 436th Army Signal Construction Battalion, which was part of the 5th Air Force stationed in Australia. His job assignment was installing communication lines in Australia. The 5th Air Force was constantly on the move.

He especially recalls a three day storm while at sea on route to Australia courtesy of the US Navy. About the time there was talk of a rotation of troops, the Unites States had dropped the atomic bomb on Japan and the war was soon to be over. By then, he had spent almost five years in the military service. After WWII, he went back to Cannon Mills and worked a total of 48 years as a foreman.

Phillip lives in Mooresville but he keeps active by walking every day, and eating lunch with two other World War II buddies at his local church three times a week. He brags that he still has all his teeth. He remembers every base he was assigned to by name, and several details of the Pacific war. He says he received a monthly $27 U.S. Army paycheck every month after he was drafted. He married his childhood sweetheart, Virginia Carriker, in 1946 after the end of WWII. His wife passed away two years ago after 66 years of marriage. He joined the American Legion in 1945.

The award was presented at his home by Rod Armstrong, American Legion Commander of Kannapolis Post 115 and Ken Parker, Adjutant. His daughter, Kathy Irvin, was also present. When asked about his recommendation for a long life, he replies that he is “thankful and blessed.” He then extended his hand for a gentleman’s handshake and pressed a peppermint candy into our palm. It was an honor to recognize his continuous service and meet such a loyal citizen of the “Greatest Generation” who sacrificed and served their country so faithfully.

Commander Mae Carroll announced the appointment of Abe Daniels as presider, and Chaplain Leonard Hall opened the program with a prayer. Speaking at the ceremony were Commander Carroll, Mayor Karen Alexander, Joyce Smyre and keynote speaker Councilman Kenneth Hardin. The organization’s birthday was celebrated with dinner, a song and cake.

Heavenly Robinson was awarded for her dedicated services during her reign as Post queen, while Robert Bratcher was recognized for driving the Post queens in his Corvettes during the parades. Wayne Hill recognized several young men for completing Boy’s State last June. Certificates of citizenship were given to Jaylon T. Sanders, Juwan Everette, Juwan Houston and Kortez Weeks.

Leonard Holt (in absentia) and Charles Weldon were presented with national certificates of continuing service for 50 years and 60 years, respectively, of faithful dedication to the American Legion, and Harold Broadway was recognized as top Post contributer. Mayor Alexander and Councilman Hardin were each given a certificate of appreciation.

A surprise plaque, reading Legionnaire of the Year, was presented to Commander Carroll for her leadership of the Post. 31 plaques for meritorious service have been won during her tenure.

Daniels announced the upcoming Memorial week celebration, May 27-June 4, in memory of past commander Wade Murphy. TC Amusements will sponsor rides, and raffles for prizes will be held during the celebration. Vendors should contact Daniel Haddock at 704-637-6231.

Chaplain Hall ended the program with a closing prayer.

The guest speaker was Joshua Moose, a missionary to Tanzania. Raised in Rowan County and having attended college in Boone, Josh is the creator of “Farming God’s Way.” He self-designed his own program and is the only one in the United States certified to teach it. He educates rural farmers and pastors on how to improve crop yields by using a holistic approach to agriculture. His vision is to see African farmers feed their families through Biblical principles and agriculture techniques that can bring restoration to the land of Tanzania and beyond. Comparisons were shown between what a crop looked like using and not using the program, and the growth rate was improved through these techniques. For more information visit www.FarmHopeThrive.org

Anyone interested in gardening is invited to attend a plant sale on May 7 and the meeting on May 23, which will feature a message on the genealogy of plants by the Rev. Harold Bales.