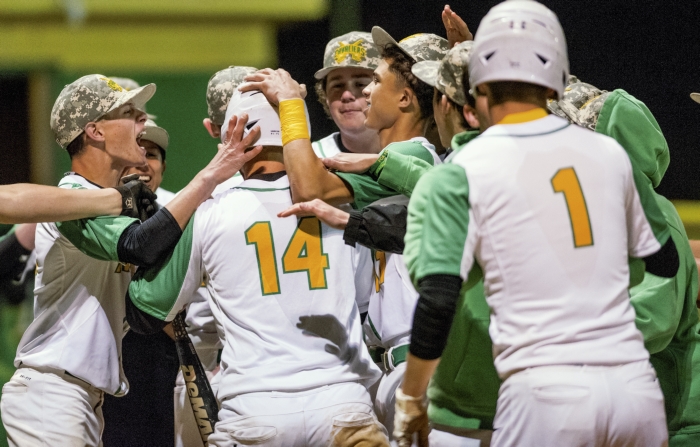 ALLISON LEE ISLEY/SALISBURY POST... North Rowan’s Jake Pritchard (14) is mobbed on his way back to the dugout after hitting a home run during Friday night’s game against West Davidson. The Cavaliers won, 8-0.

Three nights after a last-pitch defensive lapse cost them a conference victory at West Davidson, the Cavaliers responded with their best game of the season — an 8-0 win against the visiting Green Dragons.

“That game Tuesday, you could say it didn’t matter at all, but it did,” coach Aaron Rimer said after North (8-7, 3-1) handed West its first loss since March 1. “Oh, it mattered. That was a wake-up call for everybody, including me. I looked at myself in the mirror and knew I had to do a better job.”

“There’s not a whole lot he didn’t do,” losing coach Jason Lemley said after West (13-2, 3-1) had its 13-game winning streak snapped. “We would have had to hold them to nothing the way White was throwing tonight.”

White, a senior who was rewarded for the first time after four hard-luck losses, was a control artist on the mound. He faced only 25 batters, threw first-pitch strikes to 16 of them and lived on the corner of Low & Away.

“I’m a pitcher who eats up the outside part of the plate,” White said. “I’ve got a two-seamer that runs away from righties and I could see the umpire was calling it. All I did was try to hit the outside corner consistently.”

White’s command was evident from the start. He struck out four of the first nine men he saw, then finished the game by showing West’s Jake Simmons a called third strike on a sweeping, 0-2 fastball — his 75th and final pitch.

“He had great control,” said North catcher Jake Pritchard. “He came in with lots of focus and tried to keep everything outside. It was very intense.”

While White made West’s hitters pick up the check, Pritchard fed North’s nine-hit attack with an RBI-bunt single in the fourth inning and a towering, two-run homer in the sixth. Teammate Joe Harrison went 2-for-3 with a double and No. 9 hitter Corbin Smith contributed a sacrifice bunt, a run-scoring single and a ground-rule double.

“It goes back to Tuesday (a disheartening 5-4 loss),” Smith said. “We didn’t smile for two days after that game. It really took a toll on us. We just felt we needed to come out and put on a show.”

North kicked it off by jumping on West right-hander Noah Sharpe for three unearned runs in the last of the third inning. White, Harrison and Henderson Lentz sandwiched base hits around three errors. But instead of celebrating, White sounded a warning in the Cavs’ dugout.

They added three in the fourth frame. Smith’s line drive single to center stretched the lead to 4-0 before Pritchard’s bunt for a hit down the third-base line plated teammate Steven Thurston. Lentz capped the inning with a sacrifice fly.

North turned the bottom of the sixth inning into a fireworks display. With one away, Smith clubbed a double that bounced over the left-field fence and Pritchard followed by drilling a 2-1 fastball into the woods beyond left-center.

“I was ready for the fastball,” Pritchard smiled afterward. “I really wanted to bring that run in. We all did a lot of things right tonight.”

They did more than enough to remain in contention for the conference title. You almost get the feeling the rest of the CCC can hear North knocking on the door — but no one wants to answer it.

“We know we’re in the picture,” Rimer said. “But we expect to be at the top.”

All-Rowan County: Salisbury’s Knorr once again tops in the…