At Chamber breakfast, legislators double down on support for controversial bill 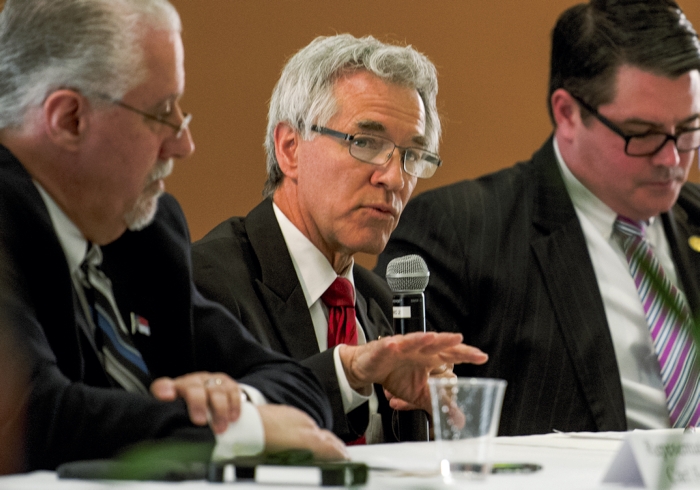 State Sen. Tom McInnis doesn’t “give a hoot” about out-of-state opposition to the controversial House Bill 2.

During a Rowan County Chamber of Commerce breakfast event, state legislators doubled down on their support for the recently passed state law, which has drawn nationwide criticism for a provision that prevents people from using a bathroom that corresponds with their gender identity.

After giving an opening statement, all four of Rowan’s legislators fielded questions from attendees. There were questions about education, health care and an I-85 exit at Old Beatty Ford Road. The most fiery rhetoric came when legislators were asked about House Bill 2.

The question came from Veleria Levy, a county commissioner candidate and second vice chair of the N.C. Democratic Party. Earlier during the event, McInnis said an estimated 18 North Carolina counties are in economic distress. Citing the figure, Levy asked why state legislators would vote to approve House Bill 2 — a measure she said “puts further stress on businesses that are here as well as those that are trying to come here.”

“This bill would not have been addressed had it not been for the City of Charlotte stepping out of bounds to begin with,” Ford said. “It would be like us and Raleigh trying to change the U.S. Constitution or trying to pass bills that affect the entire country.”

Charlotte’s nondiscrimination ordinance, which would have allowed transgender people to use the bathroom that corresponds with their gender identity, didn’t apply to all of North Carolina. Legislators have previously said the measure set a precedent and would affect businesses who operate in Charlotte, but may not have a facility in the city.

During her question, Levy said the bill is about more than bathrooms. It allows businesses to discriminate based on age or disability in employment practices, she said. Mothers with sons over the age of 7 have to send their child into the bathroom alone, she said. North Carolinians who feel they’ve been unfairly fired now have to file legal challenges in federal court instead of state court. As a result, people must file their claim within 180 days. The state-court law gives them three years.

“People are talking about the bathroom issue, but this is really the meat of that bill,” she said.

“The federal court is going to run this process anyway, so we’ll just give it to them,” Brock said.

“As a person with a (human resources) background, I’m sensitive to the needs and the wants of people that feel they have to have special accommodations,” Warren said.

Continuing, he said that rights, specifically privacy, have to prevail over needs and wants.

He said some parts of the bill weren’t perfect.

“There were some things about the bill, particularly the litigation part at the state level, that I was uncomfortable with, but you do not get a line-item veto when you vote for a bill,” he said. “So, on behalf of the greater good the bill represented and the greater agenda behind it, I voted for the bill and stand behind the bill.”

Warren said he’ll look at proposals to change House Bill 2 from any political party, but he finds “very little” that needs to be changed.