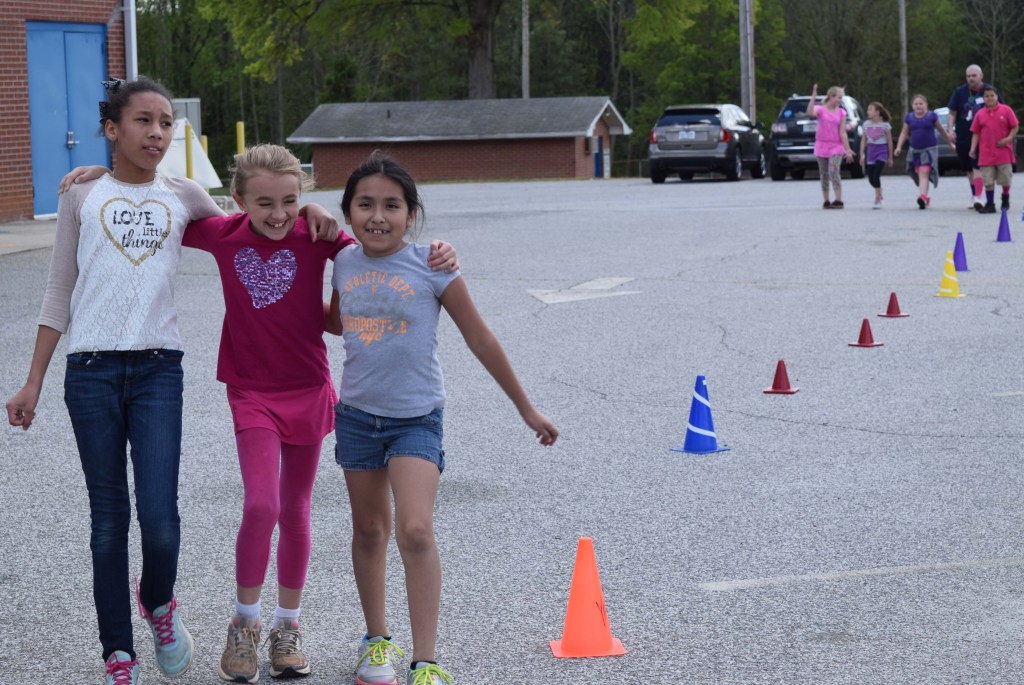 On a sunny Friday, afternoon kids at Mt. Ulla Elementary School are out in the bus parking lot, wearing a groove in the pavement as they turn laps around a temporary track. A group of four breaks off, racing each other around the curve.

By the end of the school day Friday, every student at Mt. Ulla will have walked that track – and it’s all for a good cause. Mt. Ulla Media Coordinator Mary Sloop said it’s been several years since the school held its “walk-a-thon,” an even to raise money for Relay for Life.

It’s a simple event, but it takes some planning. Sloop talks to each class about Relay for Life, and the importance of cancer awareness, and then sends them home with a donation slip.

Wednesday, the donation total stood at $1,000 – which was raised previously. Thursday, students brought in $400, and Sloop said more came in Friday morning.

Every class walked around the track during their P.E. class, to get a feel for the event. And it’s a family affair.

Stone Raffaldt walks with his daughter, Sophia and nephew, Xavier. When the two fourth graders heard about the walk-a-thon, they asked him to come.

“They’re my two youngest out of five – I’m running out of opportunities to walk with them around the parking lot,” he joked.

“I thought it’d be fun to walk with him,” Xavier said.

Over the two days of the walk-a-thon, every class has had at least one parent out, walking with a student. Sloop said they’ve had grandparents, younger siblings and babies out as well. And in the shade, more parent volunteers wait to serve sno-cones after the kids come out of the sun.

Sloop said she started the walk-a-thon because she’s had family members who have struggled with cancer, and knows it’s the same for the other faculty and staff at Mt. Ulla.

And while it’s a chance for the kids to learn about an important struggle for many – for most of them, the event was just fun. Randi Leigh Salter spent her 40-minute class racing the boys around the track, trying to beat them. She said she was winning.