Susan Kluttz given key to city at Mayor’s Spirit Luncheon 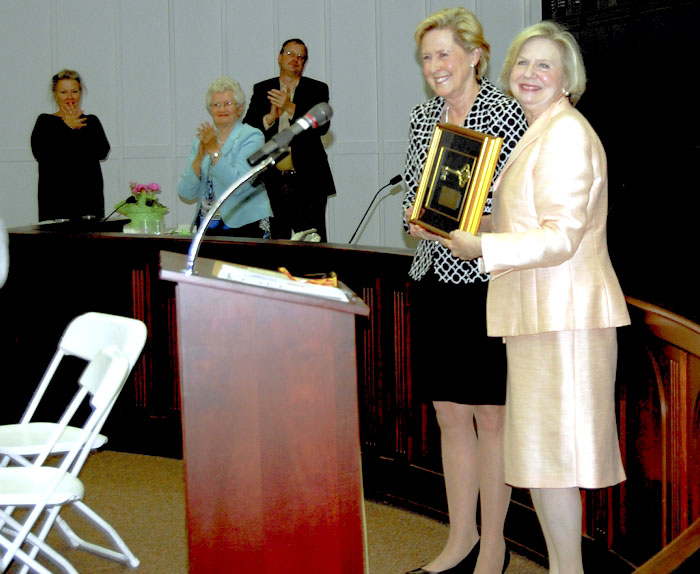 Amanda Raymond/Salisbury Post Susan Kluttz, NC Secretary of Natural and Cultural Resources and former mayor of Salisbury, was presented with a key to the city by Salisbury Mayor Karen Alexander at the Mayor's Spirit Luncheon on Thursday.

Susan Kluttz, N.C. Secretary of Natural and Cultural Resources and former mayor of Salisbury, received a key to the city at the Mayor’s Spirit Luncheon at City Hall on Thursday.

Kluttz was the guest speaker for the lunch, which had the theme, “Honoring Our Legacy: Celebrating the Founding of the Mayor’s Spirit Luncheon.”

The lunch is held to celebrate different cultures and ideologies.

“That is very important to me personally. I am a woman of faith and I know that I could not do the work that I’m doing here in the city without that reliance on our Lord,” Salisbury Mayor Karen Alexander said while welcoming attendees.

Four invocations were given — a Buddhist prayer by Susan Lee, a Jewish prayer by Dr. Seth Labovitz, an Islamic Prayer by Seddiq Behrooz and a Christian prayer by Reverend David McLean.

During her speech, Kluttz talked about how the lunch came to be and why it was created.

“Believe it or not, I had to go back nearly 20 years to the beginning of this,” she said.

Kluttz said it started in 1998 when she was the mayor of Salisbury. To improve race relations in the city, the city decided to implement diversity training for staff.

When the human resources director asked Kluttz what her goal was, she said, “I want all racism to end in Salisbury and Rowan County.”

Kluttz said that although it was a big goal, it was important to keep trying to make the world a better place.

“You reach for the highest goal, and then you’re happy with any improvement you make and you should celebrate that improvement,” she said.

The city expanded the diversity initiative to the public by inviting 100 CEOs from the largest businesses in the county to a breakfast to talk about the diversity program.

The city’s efforts were so successful that it won the City Cultural Diversity Award in 2000.

Kluttz said they then decided to invite leaders from the faith community.

“If all people were created equal, as what’s taught in the churches, wouldn’t the faith leaders want to get involved in this?” Kluttz said.

The event started out only dealing with race relations between Caucasians and African-Americans, but it was eventually expanded to celebrate the successes of multiple cultures and religions.

“We had many, many more over those years — stories that inspired us and gave us reasons to celebrate our wonderful community and people who live here,” Kluttz said.

“Improving race relations is something you have to constantly keep working on. You can’t take it for granted. It won’t work unless you continue to do that,” she said.

At the end of her speech, Alexander presented Kluttz with a key to the city.

“As you can tell, Susan fits my goals this year, which we call ‘building on the legacy of trailblazers,’” she said. “So, you see what a trailblazer she has been and continues to be in our state.”