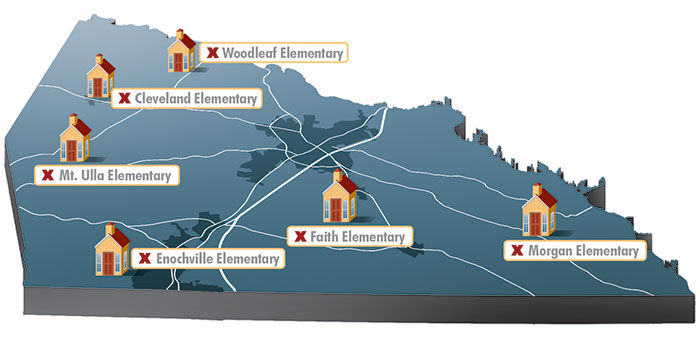 SALISBURY — The Rowan-Salisbury Board of Education is considering a scenario that would close six elementary schools, after discussing it during an all-day retreat Thursday.

In addition to Cleveland and Woodleaf elementary schools — which already are slated to be consolidated into a new school — the proposed plan would also shutter Mt. Ulla, Enochville, Faith and Morgan elementary schools.

SfL+a Architects and the Operations Research and Education Laboratory presented a population forecast predicting significant student decline over the next five years. The company also ran a capacity study on system elementary schools earlier in the year, which showed that Rowan-Salisbury elementary schools had nearly 1,800 empty seats. The numbers track with declining birth rates in the county, said Robert Kimball, research associate with the education laboratory.

“So if resident live births have been declining, we expect the number of kindergarteners to decline as well,” Kimball said.

According to the laboratory’s forecast, area elementary schools are expected to lose at least 500 additional students by 2020. That student decline will ripple up through area middle and high schools.

“It’s sort of the pig in the python,” Ted Hughes with SfL+a said.

The number of open seats is one reason the board is considering consolidating several elementary schools districtwide – along with the rising costs of keeping up an aging infrastructure.

“The question was if we were to pursue a consolidation plan, how would that affect the school district as a whole?” Hughes said.

After the education laboratory ran numbers on seat capacity, population distribution and school utilization, SfL+a recommended a scenario in which the six district elementary schools are closed.

Should the board run with the plan as is, the new consolidated western elementary school would pick up most of the three western schools, forming a large, northwest attendance area that covers a significant chunk of the county. Millbridge Elementary’s attendance area would be expanded to cover Enochville, and Morgan’s largely absorbed by Rockwell.

However, Hughes said, closing six schools would require the redrawing of every elementary school attendance barrier in the district in order to ensure that no school was over capacity and every school was being utilized at nearly 100 percent. The proposed boundaries would prioritize students attending the elementary school closest to them, and concentrating attendance barriers along the Interstate 85 corridor, where most of the district’s students live.

The numbers run by the laboratory did not take into account building age, energy efficiency or transportation time and cost. Board Chairman Josh Wagner said the goal of this particular scenario is to ensure that every school is operating as close to capacity as possible. It’s a plan that would require the shift of more than 4,000 students.

Even with six closed schools and each remaining school operating close to capacity, the system should still have room for new or transient students, Hughes said. However, the final decision is up to the board.

“We’re not in the business of going out and looking at schools’ brick and mortar and tell you which ones you need to close,” Kimball said.

The hourlong discussion focused not on if the board should close six schools, but when and how. After Kimball advised that school closings not be done “piecemeal,” the board leaned towards the idea of closing the schools at the same time the new western elementary school is projected to open — which Wagner said would ideally be August 2017. However, the new school may not open until January 2018, which would mean shuffling around nearly 50 percent of the school’s elementary students in the middle of the year.

Wagner said that from a logistic standpoint, making the transition during summer break — instead of Christmas break — made a lot more sense.

“To try to close schools and try to reallocate students at the same time seems like a real shock to the system,” he said.

Making the switch over a summer break would give students, and teachers, time to adjust. But should the board choose to close schools one or two at a time, students could potentially be forced to hop attendance zones twice within two or three years — a scenario most board members agreed should be avoided. But with Hughes cautioning that the construction of the new elementary school could take longer than planned, and should not be rushed, the board debated what to do.

Board member Chuck Hughes said he felt it was important to close the schools as soon as possible, given that two board seats are up for grabs this November and the system could use the nearly $2 million closing four of the six buildings would save.

Wagner briefly mentioned closing four of the schools by the beginning of the 2016-17 school year, but Kimball advised against it — citing a time crunch to get the numbers and run the town hall meetings. Board member Dr. Richard Miller suggested closing Enochville, Morgan and Faith at the beginning of the 2017 school year, and then completing the consolidation once the new western elementary school was finished sometime in 2018.

“Based on the construction dates of the new western elementary, I agree with saving money,” board member Dean Hunter said. “But now since we basically have 27 months to the opening of the new school, then if we didn’t consolidate starting this fall then we still have a year’s worth of savings before the new school even opened.”

Board member Travis Allen said consolidating four of the schools in 2017 would give them plenty of time to do community outreach. But it still would not solve the problem of the deteriorating condition of other schools.

After nearly an hour of rapid discussion, the board made no decisions, and agreed to bring the issue back at the April business meeting.

“Two weeks is not going to kill anything in any way,” Wagner said.

The break would give the board time to think, gather more information and look at costs. Should the scenario be approved at the business meeting, the board will take the discussion to the public.

“What we will do is then we will begin planning for town hall meetings for the affected areas to kind of relay information to individual areas on what our plans are, what the research shows,” Wagner said. “And then, after all those were completed, we would start the process of actually logistically planning to close and move staff and all those things.”

Wagner said the board could legally make a decision to close schools, but cannot actually do so without community input. But the meetings may not affect the board’s decision.

“Even though obviously there will be some folks who aren’t happy, we’re doing the most economical thing . . . basically you just have to bite the bullet and just do it,” he said.

Should the board choose to proceed, they will begin to consider logistics such as transportation costs and lengths of bus rides and staffing. Wagner said the closings should not affect teacher jobs.

“Most of the teachers, the only thing that would happen is some moving around,” he said.

The system would try to retain as much of its other staff as possible by shuffling them around, as well. But all of this hinges on whether the board chooses to run with SfL+a’s scenario, and there’s no guarantee that it would close the recommended schools. While no one on the board spoke against the scenario at Thursday’s retreat, Wagner said that may not be true at the business meeting.

“Anything can happen between now and then,” he said.

The business meeting will be held April 25 at 4 p.m. in the Wallace Educational Forum board room.