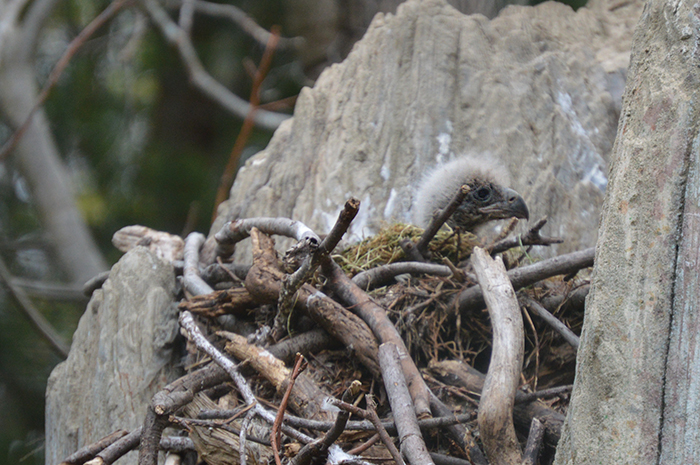 Megan Cline / Dan Nicholas Park - The head of an eaglet recently born at Dan Nicholas Park sticks above the top of its nest. The baby eagle is scheduled to be transported to the Carolina Raptor Center on Monday.

Rowan County’s eaglet will move to a new home on Monday.

The eaglet poked its head through his or her shell on March 10. Its parents are Liberty and Justice, both of whom have lived at Dan Nicholas Park since 2006.

“The eaglet will be fostered to these parents and their infertile eggs removed,” Pendergrass said in his email. “In an eagle’s mind, that means that their eggs just hatched. This has been done a lot in raptor conservation projects around the world, including with bald eagles.”

Freedom’s transfer to foster parents, should “go without a hitch,” he said. “… But of course in nature there are no guarantees,” he said.

Pendergrass said a similar process occurred with three red wolf pups that were born at Dan Nicholas in 2007. At least one of the three pups has matured and birthed pups of her own, Pendergrass said.

Freedom is scheduled to be with the foster parents, away from seeing humans, for about four more weeks. After that, the Carolina Raptor Center will move the eaglet to a “hack tower” on Mountain Island Lake. The towers are built high off the ground, with a portion of the structure that will allow Freedom to see his or her environment.

Pendergrass said staff at the Carolina Raptor Center will take food to the tower daily and discretely drop it to the eaglet.

“At such time as the eaglet is well suited for flight and exercising its muscles, the box will be opened,” Pendergrass said. “Probably a day or few later, Freedom will take his/her first flight.”

He said food will continue to be provided to Freedom at the “hack tower” after the first flight.

“If things go well, life for an eagle is pretty interesting,” he said. “For the first few years, sub-adult eagles roam vast areas of the continent. They start out as all blackish brown. It takes about five years for them to reach sexual maturity and get the white head and tail feathers we all recognize. Then, they will hopefully start a new family of their own.”