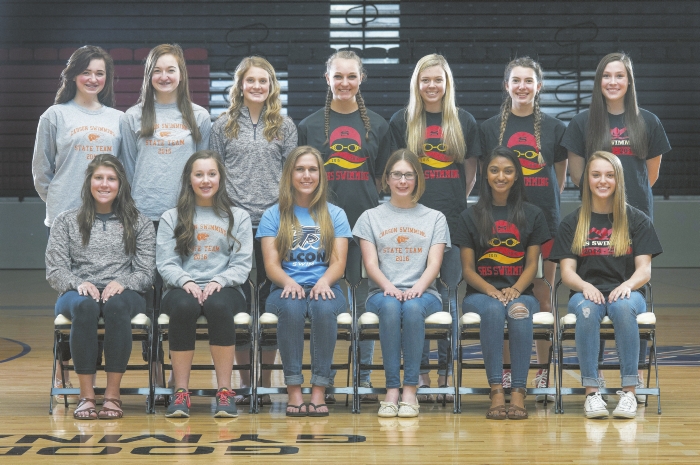 SALISBURY — If there was any doubt about the county’s top female swimmer, Salisbury sophomore Kathryn Morrison slam-dunked the competition in the 1A/2A State Championships.
In the state meet in Cary, Morrison placed second in both of her individual events — the 100 backstroke and 100 butterfly. In both events, she registered clockings that pleasantly surprised her. She swam one of the fastest backstrokes in 1A/2A state meet history — 54.83 seconds.
“I was a little surprised at my times in the state,” Morrison said. “I didn’t expect to drop as much time as I did, but I think I was really rested, and that helped. I also had a lot of motivation to do well, because I wanted the team to do well.”
Morrison, also the county’s female swimmer of the year as a freshman, made a strong debut at the state level as a rookie, placing third in the 100 back and fifth in the 100 fly.
This time, she shaved more than three seconds in the backstroke and nearly three seconds in the butterfly. That striking level of improvement indicates she could be a future state champion.
It doesn’t hurt that the girls who beat Morrison this year, Pine Lake Prep’s Alyssa Marsh and Parkwood’s Lexi Souther, are seniors.
“I just want to keep working hard and to keep improving,” said Morrison, the reigning regional champion in the 100 backstroke.
Salisbury’s girls placed 12th in the state meet with 58 points. Morrison helped with 52 of those points. Her second places were worth 17 points each. She also swam on the 400 freestyle relay team that picked up 18 points for a ninth-place finish.
The Hornets’ other six points came from senior Amelia Steinman, who earned two points for 15th in the 100 free and four points for 13th in the 50 free. Steinman also was part of that ninth-place relay team.
Morrison and Steinman led coach Ryan Starrett’s Hornets to victories in the Central Carolina Conference Championships and Rowan County Championships. The Hornets won their league for the third straight time, but it’s not a large team. This was the Hornets’ first county title since 2009.
Morrison, who likes history and science when it comes to school work, was perfect in the county meet, with two individual firsts and two relay firsts.
Salisbury’s season also benefited from the contributions of all-county performers Callie Alexander, the county champ in the 100 breaststroke, Sharmi Amin, Shelby Holden and Michaela Lemmon. Alexander and Amin are juniors. Holden and Lemmon are seniors.
Carson was runner-up to Salisbury in the county meet and has four promising all-county swimmers in sophomore Shea Hardman and freshmen Brynne Hardman, Taylor Sever and Olivia Shorter. That quartet won the 200 freestyle relay in the county meet and qualified for the 3A State Championships in that event.
Brynne Hardman placed fourth in the 3A Central Regional in the 200 IM and also was a state qualifier in the 100 butterfly.
Both Hardmans won two individual events in the Rowan County Championships.
South Rowan has two all-county athletes in seniors Madilyn Jones, runner-up in the county meet in the breaststroke, and Madyson Campbell, a diver who won the Central Regional and took sixth in the 3A State Championships.
West Rowan’s lone all-county performer is senior Mikayla Graham. She placed second in the county championships in the 50 freestyle.