Queen of Steam: When it comes to locomotives, the Class J 611 has few rivals 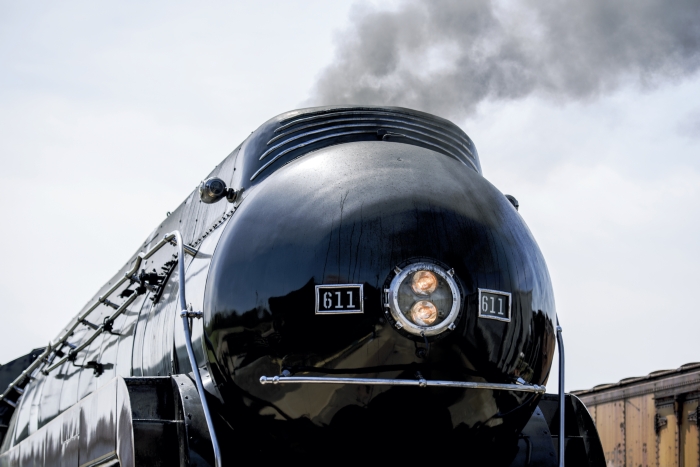 SPENCER —  The rail enthusiast looks at the Class J 611 steam locomotive, and he sees power, majesty, engineering, the bullet nose, the Tuscan red stripe, the giant wheels, the gleaming rods and the dark body of a war horse.

A war horse, breathing hard and ready for work.

Engineer Sandy Alexander of Salisbury sees and feels the same things, but behind the throttle of the 611, a wave of responsibility flows over him.

“You just have to stay completely focused,” Alexander said Wednesday during a media day for the 611 at the N.C. Transportation Museum.

The Class J 611 will be pulling two excursion trains this weekend out of the former Spencer Shops —Saturday’s roundtrip goes to Lynchburg; Sunday’s trip, to Asheville and back. Alexander will be engineer on the return legs each day.

The excursions leave about 7 a.m. and get back to Spencer about 8 p.m.

The restoration returned the 611 to rail worthiness — and new glory days. This weekend’s excursions only kick off a full schedule of steam excursions for the 611, which has the phrase “The Spirit of Roanoke” painted just below the cab’s window.

After this weekend, two full-day excursions from Greensboro to Roanoke are on tap April 23-24. The two-hour layover in Roanoke will give passengers time to  visit local restaurants, the farmers’ market and the O. Winston Link Museum and Virginia Museum of Transportation.

To give you an idea of what kind of star the 611 is in railroad circles, consider the Queen of Steam has its own magazine, its own committee, experienced crews and 611 merchandise, such as books, caps, builder’s plate mugs, posters, bumper stickers and other keepsakes.

The 611 has two historians, and the Virginia Museum of Transportation is  producing a documentary on the locomotive.

Fundraising also is underway for building a three-track preservation and education center at the Virginia Museum of Transportation for the 611, a Class A 1218 and a Class Y6a 2156, all great steam locomotives from Norfolk & Western Railway’s heyday.

The 611 is the only surviving Class J locomotive built by Norfolk & Western. Only 14 of the Class Js were produced in the N&W Roanoke Shops between 1941 and 1950.

The Class Js were designed specifically to pull passenger trains between Norfolk and Cincinnati and between Monroe, Va., and Bristol, Tenn., so they faced all kinds of terrain and conditions.

The locomotives represented high-speed rail before the term became so popular. The 611 could pull 15 passenger cars at speeds up to 110 mph, if that speed were ever needed.

They were highly dependable, too, averaging 15,000 miles a month, with some of the Class Js logging almost three million miles before retirement.

Norfolk & Western went to diesel locomotives for their passenger trains by 1958.

Because it was in good condition, the 611 was chosen to pull N&W’s “Farewell to Steam” excursions in October 1959. Its fate as far as any future on the rails then became uncertain.

It was even used as a reserve steam generator at the East End Shops in Roanoke until the flues in her boiler gave out.

Here’s a summary for what happened to the 611 in years to come:

• It was donated to the Roanoke Transportation Museum (later the Virginia Museum of Transportation) for display purposes. It had to sit outside for years in the elements.

• In 1981, Norfolk Southern President Robert Claytor sent the 611 to the Norris Steam Shop in Birmingham, Ala. It was refurbished and became a star of Norfolk Southern’s steam program, pulling excursions in the eastern United States.

• During its first days of excursions, the 611 traveled as far south as Florida, as far north as New York and as far west as Chicago.

• After 12 years of leading steam excursions, the 611 faced retirement again when Norfolk Southern decided to end the program in 1994. It went back to being a display exhibit in Roanoke.

• In 2013, the Virigina Museum of Transportation launched its “Fire Up 611” initiative in hopes of bringing the 611 back into service, as part of Norfolk Southern’s  “21st Century Steam” program.

• After its yearlong restoration in Spencer, the 611 returned to Roanoke last May pulling a 17-car VIP train, holding the mechanical crew, volunteers, suppliers, donors and special guests. The Virginia museum officials estimated some 80,000 people lined the tracks between Spencer and Roanoke to herald its return.

The Queen of Steam definitely is a star.

“It’s like the Cadillac of steam engines, that’s for sure,” said Cheri George, a fireman on one of the 611 crews.

The N.C. Transportation Museum plans to offer visitors some “Throttle Up” chances to be in the cab of 611 before it leaves April 20. That information will be forthcoming.

The 611 also will be back for special events at the Spencer museum in July and again in early September, when it also will undergo some maintenance.