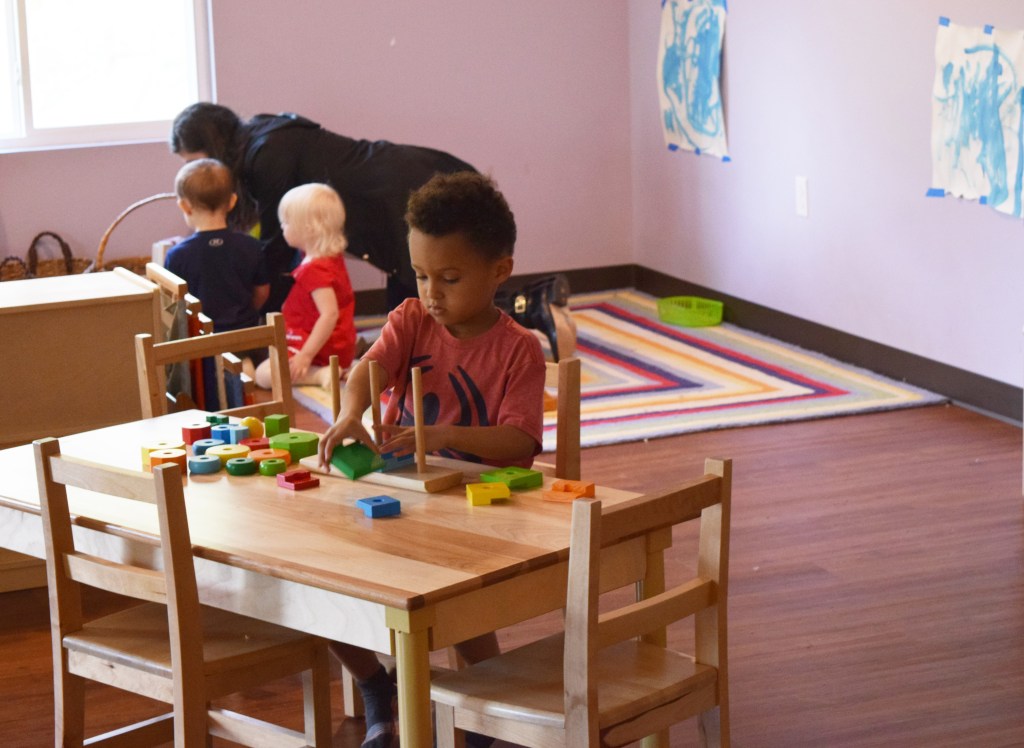 Chase Oliver, a student at Yadkin Path Montessori School, works on a self-directed activity while teachers show younger students the ropes. The Montessori method advocates for freedom and independence in a child's learning. Rebecca Rider/Salisbury Post

SALISBURY — In a small, brightly lit classroom Chase Oliver is working. He rolls a lump of blue play dough between his hands before smacking it on the table and patting it flat. As he chatters with his tablemates, he cuts a five-pointed star out using a cookie cutter and adds it to a growing pile of dough stars by his elbow. The classroom’s two teachers sit quietly, off to the side, observing Chase and the other students.

Chase is a student at the new Yadkin Path Montessori School off of Bringle Ferry Road. The school received its certification two weeks ago, and already has eight students.

Founder and Director Myra Tannehill never thought she’d open a Montessori school, or take up a career in early childhood education. In fact, she was a college English professor for many years, teaching at Appalachian and Pfeiffer. But even then, she said, her teaching style resembled the self-directed Montessori method.

Montessori schools began in Italy at the beginning of the 20th century, the brainchild of Maria Montessori – a psychologist who focused on observation and a child’s right to autonomy and experimentation. Today, Montessori schools practice a hands-off approach to early childhood education, encouraging teachers to observe, model or guide when necessary – but never to interfere.

In a Montessori school, children are encouraged to pursue their own passions and grow their sense of identity and purpose. Classrooms have minimalist furniture that students can arrange at will, and each child is allowed to choose his or her “work.”

Open shelves are stocked with dozens of tools, activities and crafts, many of them recognizable: stacking measuring cups, a basket of pinecones, a bread pan and a wooden spoon.

Tannehill said materials are kept to practical, everyday or natural objects as much as possible. A child’s “work” may involve practicing lacing, stirring or scooping objects into a bowl.

“All of the things they do are so practical, and can move outside the school in everyday life,” Tannehill said.

The scooping activity may fine-tune motor skills and prepare a child to help fix a meal while a set of pegs may help a child learn basic geometry. Children can leave an activity once they’ve mastered it, or come back to it as often as they need – or want – to. And when done, each child is expected to clean up his or her station.

Even infants are encouraged to explore and play. The baby room at Yadkin Path features nesting dolls and measuring cups and wooden blocks. The room is open and uncluttered, and all furniture – even the high chairs – are low enough for each tiny foot to rest on the ground. Tannehill said the arrangement allows babies to exercise gross motor skills.

“As much as possible, you don’t want to enclose them in anything,” she said, “You want them to have freedom of movement.”

Classrooms also span multiple age groups so that children can learn from each other – and not every child is in the same place developmentally.

But Montessori is not for every child. Children who have trouble focusing, have difficulty controlling bodily movement or cannot work by themselves often don’t thrive in Montessori schools, Tannehill said.

Tannehill began thinking about opening a Montessori school when her son turned 3. She’d always admired the program and wanted her son to have the freedom and self-assurance a Montessori education can bring.

“I wanted that for him,” she said.

But the nearest schools in North Carolina would take him out of the Salisbury community, to Charlotte or Winston-Salem. So she decided to start one.

Tannehill went back to school, got certified in early childhood education and got a degree in the Montessori method. Then, she started looking around at properties. Tannehill said she went to “bank after bank after bank” for funding, and looked at dozens of properties. Finally, she found one: 9 acres off of Bringle Ferry Road that used to be a children’s camp.

She was drawn to the parcel because of its natural qualities. It’s quiet, set back from the road and full of forest. There’s even a pond. And they have the same spirit, she said – that old camp and the new school.

Two weeks out of the starting gate and the Yadkin Path Montessori school is currently enrolling for three programs for students 2 weeks to 5 years old. They are: