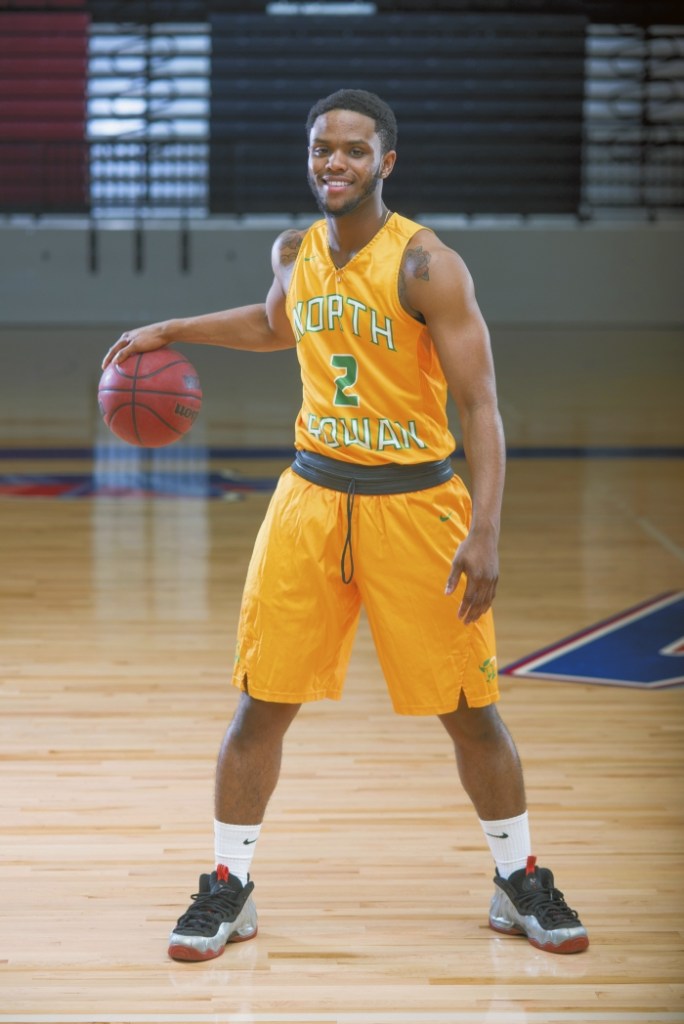 JON C. LAKEY / SALISBURY POST ... North Rowan’s Jalen Sanders is the All-Rowan County Boys Basketball Player of the Year. Sanders is the first player to win the honor two years in a row since West Rowan’s Jamel Carpenter accomplished the feat in 2006-07.

SALISBURY — The all-county photo shoot at Catawba always brings a close to the local hoops season.
This one featured a spontaneous shoot-around that included Salisbury’s DJ Alexander, Isaac Baker and Tre Oats and North Rowan’s Joseph Scott and Jalen Sanders, who was being honored for the second time as Rowan County Boys Player of the Year.
Cavaliers and Hornets sharing a ball and sharing laughs?
It happened.
It’s just a shame those five guys didn’t get to take the floor for the 2A state playoffs. Salisbury (18-5) was good enough to win playoff games. North Rowan, which finished 20-2, had the horses to go all the way.
North Rowan coach Andrew Mitchell has accepted the season’s untimely demise, but he still aches for a senior class that was spearheaded by Sanders.
“I do feel bad for them,” Mitchell said. “I believe Jalen would’ve led us a long way, and our seniors lost opportunities for college coaches to see them in the state playoffs. It slowed down some of the recruiting.”
For Sanders, the unfortunate North-Salisbury “fight” that ended his prep career and cost him CCC tournament games as well as state playoff games, also may have denied him the distinction of becoming his school’s all-time leading scorer. He needed 108 more points.
James Henderson set the North standard of 1,654 points in 1972. That mark hadn’t been threatened seriously until Sanders, a four-year starter for the Cavaliers, came along. Sanders finished with 1,547 points and will graduate in second place.
Sanders could’ve scored more had he been hunting points, but he always played with other standouts, and he never minded finding the open man. He played alongside Michael Connor, Michael Bowman, Oshon West, Malik Ford and T.J. Bates as a freshman. He went out on a team that included Scott, Josh Handy and Henderson Lentz.
Sanders’ selection as player of the year makes it four straight honorees for Mitchell’s Cavaliers. West was honored in 2013, while Connor got the nod in 2014. Sanders is the first to repeat as Rowan’s male player of the year since West Rowan’s Jamel Carpenter in 2006-07.
“It’s a big accomplishment, a great honor to be player of the year,” Sanders said. “I know (West Rowan sophomore) Caleb Mauldin was great, and I congratulate him on the season that he had. I congratulate everyone who made all-county because this county has a lot of good players.”
Mauldin’s county-leading 23 points per game put him on the short list of candidates, but the 6-foot Sanders was outstanding as North’s point guard. His value to the Cavaliers went far beyond his 18.5 points per game.
“Jalen has that strong build and he can handle the ball, and he’s worked hard to become a better outside shooter and defender,” Mitchell said. “He’s a true leader. He’s well-liked by everyone, from his teammates to the school administration. He’s done everything we’ve ever asked him to do as coaches. That’s the reason he’s accomplished so much.”
Sanders’ accomplishments include scoring in double figures 82 times in his career. He topped 20 points 23 times. He scored a career-high 31 as a senior when North beat Ardrey Kell, a good 4A team, 66-61, on the road.
“The thing you can say about Jalen is that the bigger the game was, the more excited he got,” Mitchell said.
North always played up and tackled a difficult non-conference schedule, but the Cavaliers still went 89-18 in Sanders’ four seasons.
Sanders played a season in the 1A Yadkin Valley Conference and three seasons in the 2A Central Carolina Conference. North went 44-2 in league games with Sanders in the lineup, including 10-0 this season when he was voted CCC Player of the Year.
“Playing basketball for North for four years was a great experience,” Sanders said. “And not just the games. I’ll take a lot of life lessons with me that I learned from Coach Mitchell, Coach (Tim) Bates and Coach (Bill) Kesler.”
Sanders was one of 10 seniors chosen to represent North Carolina in the Carolinas All-Star Basketball Classic in Myrtle Beach. West Rowan’s Mike Gurley was head coach of the N.C. squad and Sanders rode to Myrtle Beach with Gurley.
“Well, I’d never trade Coach Mitchell, but Coach Gurley is a great guy,” Sanders said. “He makes you laugh.”
Even with all the accolades, points and wins, Sanders hasn’t committed to a college program yet. A post-grad prep school is a possibility. Mitchell wouldn’t mind seeing him go that route.
“You go to one of those prep schools, and it gives you a year to prepare for college, but you’ve still got four years to play,” Mitchell said.
Mitchell said academics aren’t an issue with Sanders. He’s a 3.0 student with a solid SAT score.
He hasn’t signed yet, mostly because of his height. Hampton is the D-I school that’s shown the most interest so far.
“I think Jalen’s situation is like Steph Curry’s,” Mitchell said. “I’m not saying Jalen is Steph Curry, but a lot of people said Steph wasn’t big enough and now they regret it. Jalen’s going to play college ball, he’s going to be good, and a lot of people will regret they didn’t sign him.”
When it was time for their pictures to be taken, Scott and Sanders stopped dribbling and shooting and headed to the changing area.
And Sanders put on that gold jersey for the last time.