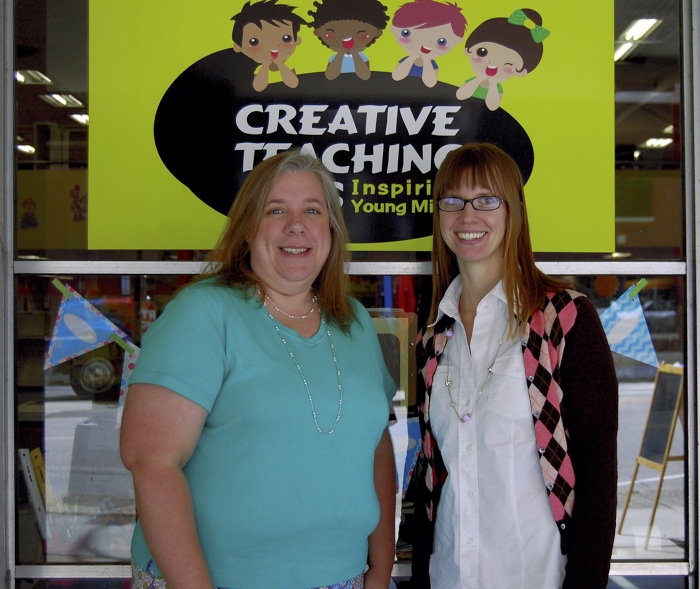 Cindy Rogers and Bibi Barringer are the new owners of Creative Teaching Aids at 310 S. Main St. They are restocking customer favorites, like bulletin board sets, banners, borders and accents, and adding new products to the store. Amanda Raymond/Salisbury Post

Cindy Rogers and Bibi Barringer took over the educational supply store in late February from Pam and Darly Honeycutt, Joy and Alan King and Steve and Mary Lynn Misenheimer.

Rogers said she went to the store during its closing sale and found out that the owners were going to sell the place.

Rogers said she “wasn’t really serious about it at first, but then became serious.”

Rogers and Barringer have been friends for about 11 years. Their husbands, Danny Rogers and James Barringer, grew up together and Rogers has known Barringer’s husband for a long time as well.

“We’ve visited each other’s churches and we have good memories,” Barringer said.

The store offers educational supplies and materials for teachers and parents, whether children are in the school system or home-schooled.

Rogers has home-schooled her two daughters and Barringer said she plans to home-school her children once they are old enough. Barringer was an assistant teacher when she lived in New York and has worked in retail and corporate offices.

Rogers and Barringer have restocked about 80 percent of the store’s inventory with help from the previous owners. Popular favorites including bulletin board sets, banners, borders and accents are in stock, as well as Common Core State Standard Testing and Summer Bridge books.

Rogers said that since the Bible Book Store closed, people have been coming into the store asking about it. Rogers and Barringer said their faith was important to them, so they decided to add a Christian area to the store that offers Bibles, devotionals and posters, with other church supplies soon to come.

There will also be a home-school consignment area for anyone who wants to sell educational supplies and books.

“We hope that this will also be a one-stop place for the parents and teachers to come in,” Barringer said.

“That was one of the things we had heard. (Customers) didn’t feel like they could come and really pay attention to what they’re looking for and take their time because they had their kids,” Rogers said.

They have added a chalkboard play area for kids to enjoy while their parents shop.

Classes will also soon be offered on the upper level of the store, including classes on writing, art and etiquette.

Barringer said they will be increasing the inventory of the store and will also be going around to schools to let people know the store is still open.

“A lot of folks thought that the store did close, so that’s why we’re trying to get the word back out that we are still open and we are here,” Rogers said.

For more information on the store or to order supplies online, visit creativeteachingaid.com.