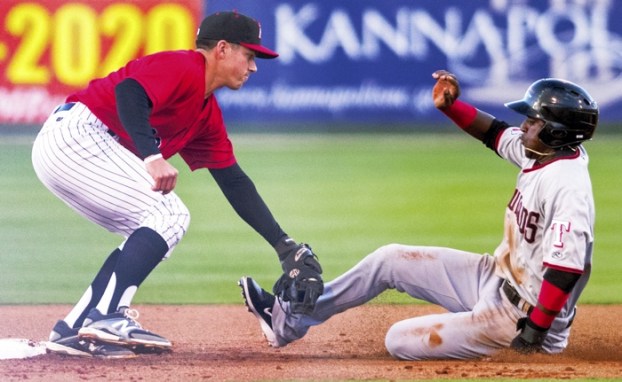 By Eric Oas
Intimidators Media Relations
KANNAPOLIS — The Kannapolis Intimidators struggled to hit with men in scoring position during Thursday night’s season opener, mustering a single run in a 5-1 loss to the Hickory Crawdads at Intimidators Stadium supported by Carolinas HealthCare System.
Tyler Sullivan set the pace for the Intimidators as the leadoff man. The centerfielder went 2-for-5 and scored the only run of the night in the bottom of the first inning. Sullivan led off with a walk after a nine-pitch at-bat against Crawdads’ starter Brett Martin. Four pitches later, Sullivan scored on a Johan Cruz infield single and Hickory throwing error. Despite the ball not leaving the infield, Sullivan scored from first when he broke for home on catcher Chuck Moorman’s throw to second base.
The Crawdads (1-0) jumped ahead for good in the bottom of the third inning. Intimidators (0-1) starter, Luis Martinez, was let down by his defense when a two-out ground ball to Cruz was played into an error at shortstop, allowing the inning to continue. Andy Ibanez cashed in for the Crawdads two pitches later with a two-RBI triple.
Martinez (0-1) worked five innings, allowing four runs, two earned, while striking out four and walking one.
Ibanez was the offensive standout for the Crawdads. The designated hitter went 4-for-5 while driving in four runs in his season debut. Ibanaez collected four of the 10 hits for Hickory hitters.
Despite opportunities for the Intimidators to come back in the third and sixth innings, Hickory pitching managed to tally big strikeouts that stifled would-be rallies.
Crawdad starter Brett Martin struck eight in a four-inning outing and was relieved by Tyler Davis (1-0). Davis continued the theme of strikeouts with four of his own in three innings of work while earning the win. Both pitching staffs combined to tally 21 strikeouts.
The Crawdads put the game out of reach with two runs in the fifth and one more run in the seventh inning.
Thursday’s game marked the opening of the 22nd season of professional baseball in Kannapolis and the start of the 16th both as a White Sox affiliate and under the “Intimidators” nickname.  Before the game, Kannapolis Mayor Darrell Hinnant threw out the ceremonial first pitch of the season.
The Intimidators continue the season-opening series against Hickory on Friday at 7:05 p.m. as LHP Ryan Riga makes his season debut for Kannapolis against Crawdads starter RHP Dillon Tate.   The first 1,000 fans into the ballpark will receive a free magnet schedule courtesy of Pizza Hut.  For ticket and promotional information, call the F&M Bank Box Office at (704) 932-3267 or visit IntimidatorsBaseball.com.
Hickory            0 0 2  0 2 0  1 0 0  — 5 10 2
Kannapolis      1 0 0  0 0 0  0 0 0  — 1  6  2
W — T. Davis (1-0). L — L. Martinez (0-1)
You Might Like