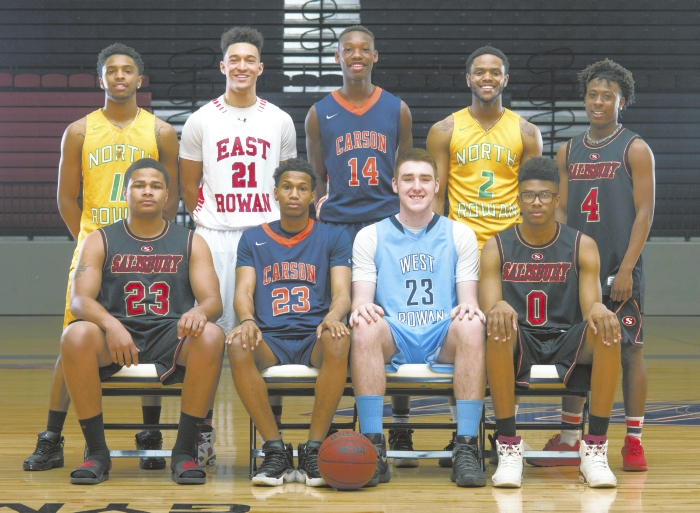 First team
Jalen Sanders, North, 6-0 Sr. Guard — Sanders averaged 18.5 points, mixing transition buckets with 3-pointers, and he was the floor leader for a 20-2 team that was among the best in 2A. Sanders had games of 30 and 31 points and he scored 20-plus eight other times. The Central Carolina Conference Player of the Year, he produced his strongest season as a shooter and a defender. He represented North Carolina in the Carolinas All-Star Classic and finished his career with 1,547 points, second in school history to James Henderson.

Caleb Mauldin, West, 6-7 So. Forward — Mauldin was asked to do a lot for a sophomore, but he responded. He put West’s offense on his shoulders most nights, putting up 23 points a game in a league with terrific teams. He had a 43-point outing against Central Cabarrus and scored in the 30s six other times. He had a 32-point effort against 3A champ Robinson in a game in which West’s team managed just 46. All-South Piedmont Conference.

Joseph Scott, North, 6-0, Jr. Guard — Scott extended his shooting range quite a bit and added 3-pointers to his stick-back and transition games. Relentless and consistent, he scored in double figures in 21 of North’s 22 games. He had a 31-point effort against Davie in a Christmas tournament semifinal and averaged 15.2 points per game. All-CCC.

Jamarius Hairston, Carson, 6-3 So. Forward — Long-armed and active, Hairston puts the ball in the hoop in a lot of different ways and he improved every facet of his game from his freshman year.
He scored in double figures 18 times, including a 33-point explosion against Northwest Cabarrus and a 27-point effort in an upset of Cox Mill.
Hairston averaged a team-high 13.7 points per game and made the All-SPC team.

DJ Alexander, Salisbury, 6-3 Sr. Forward — Like Carson, Salisbury had very balanced scoring. Alexander has a thick body made for football, but he has a soft touch and led the Hornets with 11.9 points per game. He topped 20 points twice and was in double figures 14 times.
Alexander finished his four-year varsity career with 1,052 points to rank 10th in school history.
All-CCC.

Second team
Austin Love, East, 6-2 Sr. Guard — Love is an excellent outside shooter and good driver and led the Mustangs in scoring. He was good for 14-18 points most nights in the SPC, regardless of the opposition. He had a 21-point effort in a win against South Rowan in his final high school game and scored over 600 points in his career.

Brenden Westbrook, Carson, 6-3 Jr. Forward — Westbrook isn’t talked about a lot, but he’s one of the county’s best and most versatile athletes. He also excels in football (second team all-county cornerback), and he’ll be a big factor in the jumps for Carson’s track team. Westbrook averaged 10.8 points per game, with a high of 22 against Concord. He’s long, he has 3-point range, and he’s a solid defender.

Josh Handy, North, 6-5 Sr. Forward — Handy plays in bursts of brilliance, and when was on, he was about as good as anybody. He’s extra-long, he rebounds well, and he’s a streaky shooter. Handy averaged 11.7 points per game and finished his career with 750 points. All-CCC.

Tre Oats, Salisbury, 6-5 Jr. Forward — Oats made a nice jump this season, improving from 7.9 points per game as a sophomore to 10.2 this season. He was consistent, putting up 10-12 points every night, blocking some shots and taking care of the glass. He had a career-best 21 points against Thomasville and made the All-CCC team.

Isaac Baker, Salisbury, 5-9 So. Guard — A transfer from East Rowan, Baker got off to a great start. He scored 30 points in his second game as a Hornet to lead an overtime victory at Trinity.
An ankle injury slowed him down some, but he still managed to score 11.1 points per game while being the Hornets’ primary ball-handler. He accounted for 37 points in the two big CCC wins against Lexington and made the All-CCC team.