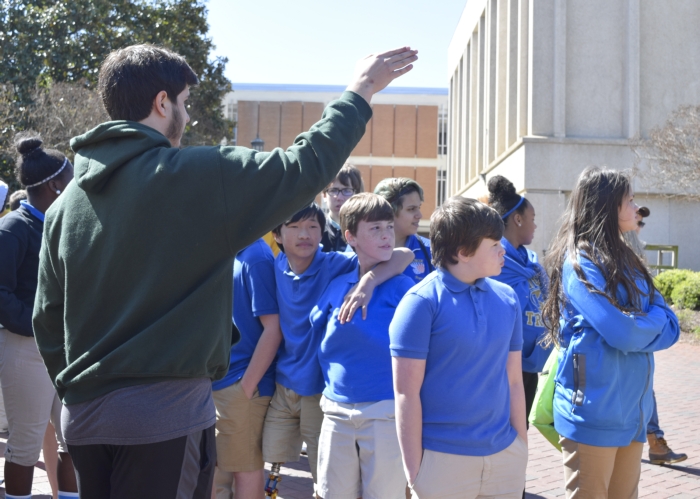 CHARLOTTE — A seventh-grader from Knox Middle School bounces up and down on the balls of her feet, waving her hand in the air. Colton Opel, a UNC-Charlotte student, breaks off his tour to hear her question.

“Ya’ll got a Starbucks here?” she asks, pointing to the green umbrellas lining a café-like building.

Giggles break out among the group, but Opel confirms that UNCC does have an on-campus Starbucks.

The 46 students who visited UNCC are part of more than 190 Knox seventh-graders who toured college campuses Tuesday, with other groups touring UNC-Greensboro and NC A&T. And over the course of the week, every Knox student will visit a nearby college – from Rowan-Cabarrus Community College to Wake Forest University.

It’s part of an effort to promote higher education that Knox co-principals Dr. Mark Waiksnis and Dr. Latoya Dixon started last year. By the time they leave for high school, each student should have visited three college campuses.

“I have never seen a state with so many schools,” seventh grade math teacher Dr. Mary Steltz said. “There’s no reason not to go to school.”

While many of the students visiting UNCC already had plans to attend college, the sprawling green campus was not in their future. Instead, they listed off schools like Duke or Carolina – or schools a family member had attended.

Cequane Lawing said he planned on attending UNC-Wilmington, which was his sister’s school. But he was impressed with UNCC’s campus.

“This is like, the biggest college I’ve ever seen,” Lawing said.

Other students were also impressed by the size of UNCC’s campus, the amount of green parks, statues and the number of students.

“When I first came here, I didn’t think it would be so crowded. ‘Cause it’s a lot of people,” Ashanic Scott said.

Scott has set her sights high. She said she wants to attend Yale, Harvard or Florida State.

“They seem like the type of schools that could take you somewhere in life,” she said.

And even if she didn’t have plans to attend UNCC, she enjoyed touring the campus and learning more about the school.

“It’s interesting, and it makes you think about where you really wanna go and gets you to think about college,” she said.

Steltz said the trips promote conversation about the future. Sometimes, the idea of attending college – or even thinking about the work and planning needed for to achieve their goals – can go over students’ heads.

“Because they don’t see that in their future,” she said.

She did think that the trips needed some more partnerships and planning beyond a simple campus tour. Staltz said it might help students more if they visited a high school campus in the fall, and college ones in the spring.

It would also help students if Knox partnered with each campus to have tours led by someone who could help students start planning majors, or suggesting career paths for particular interests, she said. Right now, the students take a simple campus tour, looking at buildings and art sculptures, but if they were also able to visit dorms and get a taste of campus life, it might bring the idea home.

“You gotta remember, they’re in seventh grade . . . this doesn’t make sense to them yet,” Steltz said.

She said the students are already thinking about what they want to do for a career or in the future – and they dream big, she said – but they don’t know the steps they need to take to get there.

“They don’t know what it takes to get into it,” she said, “so it’s still a fantasy dream.”

But the trips do provide kids the exposure needed to start those conversations. Last year, Staltz said, it sparked awareness for many students.