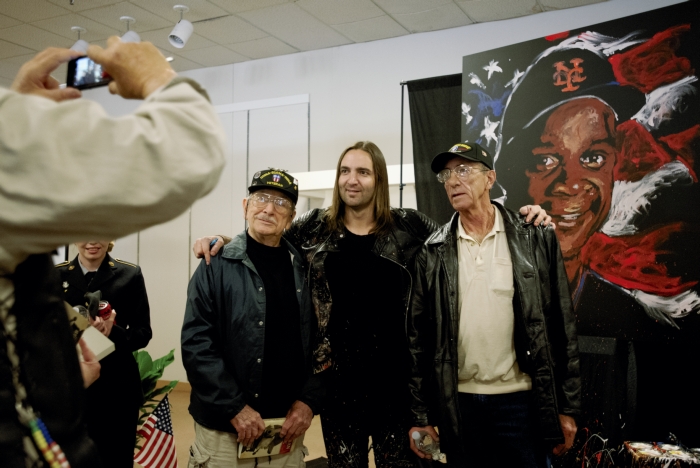 From left, Tom Harrell, artist Jared Emerson and James Trexler pose for a picture in front of the painting of Darryl Strawberry created by Emerson at the Vietnam Veteran Commemorative Event on Tuesday at the former JC Penny at West End Plaza. Allison Lee Isley/Salisbury Post

In a store once, a couple of boys approached Gminski, and one of the kids wondered if he had ever played basketball. Gminski said he used to play in college and the pros.

“Who did you used to be?” the boy asked.

Most of the Rowan County military veterans who gathered Tuesday morning at a Vietnam Commemorative Event knew exactly who Gminski “used to be.”

The veterans also were able to speak and mingle Tuesday with retired baseball star Darryl Strawberry and get a close-up look at the M&M’s Sprint Cup car of Joe Gibbs Racing. The event, associated with Gibbs’ Game Plan for Life, was held in the former JC Penney store at West End Plaza.

Gminski said he was proud to have worn the Duke University basketball uniform. The guys on his Duke team who played for the national championship against Kentucky 38 years ago are still close and still get together on occasion.

But their basketball uniforms, Gminski said, pale in comparison to the military uniforms veterans put on for their country.

The Elizabeth Maxwell Steele Chapter of the Daughters of the American Revolution was official host for this particular Game Plan for Life program. It dovetailed nicely with the regular Tuesday morning free coffee and conversation veterans enjoy at Thelma’s restaurant at the West End Plaza.

Tom Harrell, a chief organizer for the Tuesday coffee gatherings, said 103 veterans were in attendance Tuesday at Thelma’s. About 10:30 a.m., many of those veterans took the short walk from Thelma’s over to the former JC Penney store.

Members of the West Rowan ROTC greeted the veterans as they entered, and the East Rowan ROTC later posted colors before the program started.

Busch is one of the drivers for Joe Gibbs Racing. Game Plan for Life programs — there’s a Joe Gibbs-authored book by the same name — bring in well-known people such as Gminiski and Strawberry to talk to kids about the life decisions they make.

The Rowan/Kannapolis Alcoholic Beverage Control Board, Salisbury Police, Rowan County Sheriff’s Office and Rowan County ROTC programs are involved in Game Plan for Life, which is in its fourth year this week.

Terry Osborne, general manager for the Rowan/Kannapolis ABC, said after this week’s 12 programs in local schools, some 115,000 students will have been reached in the four years.

Strawberry said he spent a long time, even after making the major leagues, in trying to find out who he really was and making poor decisions along the way. In that respect, he was a lot like Mickey Mantle, Strawberry said.

“I wish I had really known how good I was,” he said.

Strawberry, who played baseball in highly visible market areas such as New York and Los Angeles, dealt with addiction, jail and two bouts of cancer. Only when he surrendered his life to Christ, Strawberry said, “that’s when I became a man.”

“Baseball doesn’t make you a man.”

Strawberry’s strong faith testimony drew “Amens” from the audience on several occasions. Strawberry, 54, said he used to think he was put on earth to play baseball, but through all of his challenges, he also was searching for his purpose in life.

“The race is not about me,” Strawberry said. “It’s about the King.”

A former athlete and artist, Jared Emerson wowed the audience after Strawberry’s talk by painting a large, stunning portrait of Strawberry with an American flag as a background.

Emerson painted mostly with his hands, not a brush, on a black canvas. As he painted, he moved and jumped to music. Emerson also left the crowd with an inspirational message and talked about good and bad decisions he made on his life’s journey.

Going back to the question of who he was or “used to be,” Gminski said things such as values, faith and belief systems combine to make people who they are. Playing basketball was simply what  he had done, Gminski said.

“It’s not who I am or what I will be,” said Gminski, who is now a basketball commentator during the college season.

Gminski noted that Duke University’s current basketball coach, Mike Krzyzewski, grew up in a tough neighborhood in Chicago, graduated from West Point and played at the military academy for one of the tougher coaches, Bob Knight.

Mention to Krzyzewski the words “duty,” “honor” and “country,” and the coach becomes emotional, Gminski told the veterans and ROTC students. He emphasized that everybody in the room can be role models, starting with their families and friends.