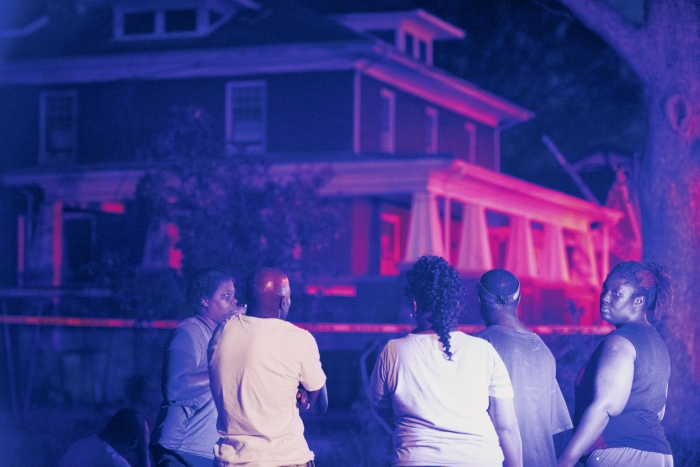 Residents and neighbors watch firefighers work at a West Horah Street house fire Monday night. Officials say an electrical system overload started the fire at the structure, which is not permitted as a boarding house but had 14 tenants living in a dozen rooms. Allison Lee Isley/Salisbury Post

Salisbury city officials say they have no record of a West Horah Street home that caught fire Monday night — displacing 14 people — being permitted as a boarding house.

City fire officials confirmed Tuesday the fire at the multi-level brick home, 916 W. Horah St., started in the basement and was the result of an overloaded electrical system. Tenants say the property is divided into 12 units.

The one-alarm fire began around 7:30 p.m. Multiple fire departments responded, but Fire Chief Bob Parnell said Monday night for a structure fire within the city, all of the Salisbury units automatically respond as do their two mutual aid fire departments — Franklin and Granite Quarry.

Parnell also said two firefighters had to negotiate their way through the basement in order to get in and out of it as they searched for any possible occupants inside. No one was inside the basement apartment.
Fire Marshal Terry Smith said an electrical engineer would have to get into the property to determine the specifics of the overloaded circuit. He said firefighters got caught up in wiring in the basement while putting out the fire. Smith said the duct work in the basement, and the wiring that holds it together, came down.

On Monday night, Billy Everhart told a reporter he’s lived at the boarding house for six months and had complained to property owner Earl McMillon about three months ago about what he deemed “faulty” wiring.

McMillon said Monday night he didn’t recall a conversation with Everhart about the wiring, and that if he had such a conversation, he was sure he’d have taken care of the problem.

Salisbury Communications Director Linda McElroy said Tuesday the last permit on file with the city for the home was issued in May 2002 for a “family care home for up to six resident handicapped persons.”

She said the city is still investigating the matter through its zoning and fire departments.

As to any possible consequences for McMillon, she said he will not face fines at this point and Code Enforcement has informed him of what is now required.

“If he does not comply, Code Enforcement will follow-up with a Notice of Violation … that provides a certain number of days to come into compliance,” McElroy said.

The building once operated as a hospital that served the African-American neighborhood around Livingstone College. The home is known historically as the Hercules Smith House, and was built in 1924.
The Hanford Dole Chapter of the American Red Cross is assisting the people who lived in the boarding house Disaster Program Specialist Heather LeMaster said a total of 14 people were displaced, including three children.

Red Cross had seven staff and volunteers on hand Monday night to help those displaced, but LeMaster said Tuesday they are struggling to find somewhere for what she calls “hard to place” individuals.

Many of the tenants were able to go inside to retrieve some items, but all of their belongings are smoke-damaged, she said.

Her hope, she said, is that people in the community will be able to provide some assistance and potential living space, or perhaps a local cleaner could provide them a way to clean their smoke-damaged clothing.

The Red Cross is a Rowan County United Way partner agency. To assist the families displaced, contact the American Red Cross at 704-633-3854.