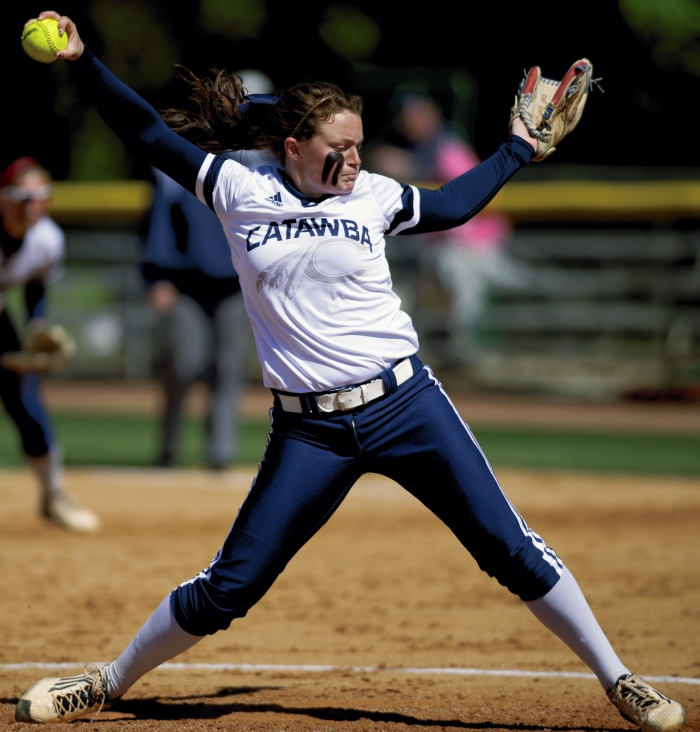 ALLISON LEE ISLEY/SALISBURY POST Catawba's Carley Tysinger, 4, pitches to Lenoir-Rhyne during the first game of the doubleheader at Catawba's Whitley Field in Salisbury on Tuesday. Lenoir-Rhyne won the game 1-0.

SALISBURY — Catawba pitcher Carley Tysinger ended Tuesday’s softball action at Whitley Field with her 19th strikeout of the afternoon and the 1,198th of her amazing career.
Tysinger ranks 11th — and counting — when it comes to all-time Division II strikeouts. When the senior applies her eye black, frowns and marches into the circle like a 5-foot-4 soldier, the Indians know they can beat anyone.
“We believe in Carley, we believe in her ability, and we just know she’ll get it done,” Catawba catcher Taylor Adams said. “And we trust our defense.”
Catawba faced its biggest challenge of the South Atlantic Conference season when it took on Lenoir-Rhyne’s Bears in a doubleheader on Tuesday. Both teams entered with 10-0 league records.
Lenoir-Rhyne won 1-0 before Catawba answered with a tense, 3-2 victory. Tysinger logged her school-record 90th career victory in the nightcap.
The Bears (34-8, 11-1) out-hit the Indians, 13-6, and were charged with zero errors to Catawba’s three, so the Indians (27-11, 11-1) couldn’t be upset with a split.
“They proved they could play with us and we proved we could play with them,” Catawba coach Nan Whitley said. “It was going to be hard for either team to get a sweep today. Lenoir-Rhyne is very, very good, and we got the dogfight we expected. We’ll see them again.”
Tysinger didn’t allow an earned run in either game, but she had to pitch out of a lot of jams.
•••
In the opener, Lenoir-Rhyne scored the only run of the game in the first inning.
A Catawba error on Erin Boone’s groundball started the day, and when Christina Walker, a speedy slapper, rolled a grounder to short, Catawba’s Gina Gerone looked at second, only to see Boone already sliding in. Then Gerone’s throw to first wasn’t in time.
After Madison Carter dumped a perfect bunt in front of the plate, the Bears had the bases loaded with none out.
When cleanup hitter Jordin Phillips rapped a hard grounder toward the third-base bag, Catawba’s Sierra McCarthy made a fine play. The freshman stepped on the bag and then fired home. With the forceout no longer in affect, Adams had to make the tag at the plate on a sliding runner, but when she did, Catawba had a huge double play.
Catawba fans were still sighing with relief when Mackenzie Cates whacked a solid single. The Bears led 1-0.
Poised senior pitcher Maryann Hoskins did the rest for the Bears. She got ahead of hitters and then let the Indians get themselves out by chasing pitches out of the strike zone. Hoskins struck out 11.
Catawba only’s hits — and only threat — came in the second inning. That’s when Katherine Shumaker stroked a single up the middle and Adams looped a hit to left. But Hoskins struck out Morgan Brann and got Gerone on an inning-ending popup.
Tysinger didn’t allow a hit in the third, fourth or fifth, but the Indians couldn’t catch up.
•••
Catawba regrouped during the 30-minute lull between games. Then Tysinger and Hoskins returned to the circle to duel again.
“They’d beaten us in that first game, so they had all the momentum,” Catawba junior Caroline Turner said. “We knew we couldn’t get down on ourselves. It was important to start strong in the second game.”
Tysinger enjoyed an overpowering 1-2-3 first inning, but Phillips smoked a double to start the L-R second. Tysinger nearly stranded Phillips, but a two-out infield error handed the Bears a 1-0 lead.
Catawba’s bottom of the second saved the day for the Indians.
Brann walked to start it. Hoskins falls off the rubber toward first base, and Gerone followed with a hard bunt that rolled to the left of the circle and just kept going.
That was all for Hoskins. The first batter reliever Emily Kenley faced with two on and no outs was Tysinger, and she drove in the first Catawba run with a double to right field that plated Brann and sent Gerone to third.
Kinley, a lefty, retired the next two hitters, but then Turner delivered a clutch hit. She nearly lifted the ball out of the park to the opposite field with a drive to the right-field fence. That two-run double staked Tysinger to a 3-1 lead.
“Teams know that we can cream inside pitches and they try to pitch us outside,” Turner said. “I was looking for an outside pitch, and I got one.”
Tysinger with a 3-1 lead is like having hotels on Park Place and Boardwalk in Monopoly, but the Bears were good enough to make it exciting.
A slow roller and a bloop gave the Bears a pair of baserunners in the fifth, and then Boone connected solidly and sent a shot screaming toward left-center. Catawba center fielder Kristen Stinnard ran it down, even with the wind dragging the ball away from her.
“She got a great jump on that ball, and she also had the speed to make the catch,” Whitley said.
The runners tagged and moved up a base on the long flyout, but Tysinger stranded them with a strikeout and a popup.
The sixth was even scarier. A leadoff walk and Tysinger’s throwing error on a tapper in front of the plate put the Bears in business. Sarah Kenley’s sac fly cut Catawba’s lead to 3-2, but Tysinger was made of steel one more time. After a groundout and a strikeout, the threat was over.
In the seventh, two routine flyballs preceded that final punchout by Tysinger.
“Carley is a very dominating pitcher,” Shumaker said. “I’ve caught her a lot and she’s just fun to catch and she’s fun to play with. Lenoir-Rhyne usually scores five to eight runs every game, but Carley made great pitches to some tough hitters.”
Catawba moves on and prepares to host Mars Hill in another SAC doubleheader on Saturday.
•••
NOTES: Second baseman Delane Smith is out of action after being cleated. She’s expected to miss at least two weeks. … Shortstop Gerone and third baseman McCarthy made diving catches for the Indians. … The opening-game loss ended Catawba’s school-record 11-game winning streak.