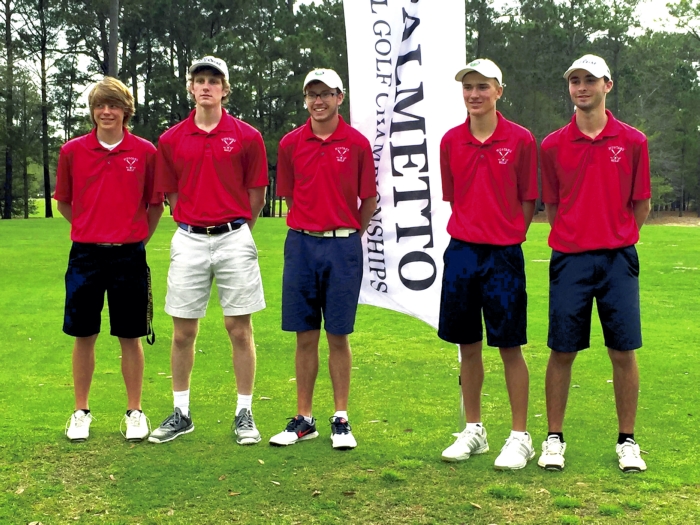 DURHAM — The state’s finest prep golfers gathered at Durham’s Treyburn Country Club on Monday for the North Carolina High School Invitational.
But scores soared on a layout that played 6,900 yards from the back tees.
Some great players, including East Rowan junior Nick Lyerly, shot 78s. Good players shot higher.
“That was the toughest and longest course I’ve ever played in my life,” said East Rowan senior Ben Rollins, who shot 83. “And then you throw in 20 mile-per-hour winds. There were big hills, like mountaintops, and that’s where the wind was really a factor. It was a strong field with teams that are going to shoot really low on just about any course. But we played in tough conditions.”
East Rowan earned its invitation to Treyburn with a 2015 3A state runner-up finish.
East coach Rhett Teems welcomed back four of his top five golfers — defending 3A individual champ Lyerly, East Carolina signee Logan Shuping, young phenom Bryson Sprinkle and Rollins — for another run this year. Then the Mustangs added Salisbury transfer Christopher Queen to a squad that also includes Will Garland.
“Chris and I kind of go back and forth for that No. 4 spot,” Rollins said. “It’s a good battle, good competition. It keeps everybody going.”
The Mustangs finished ninth Monday in an elite field of 13 teams that consisted of public and private school state champions and runners-up. There also were state-ranked individuals who earned invitations, such as Concord’s James Madison signee Walker Cress. He shot 76.
Lyerly led the Mustangs with a 39-39 — 78 effort. He made two birdies, but a triple bogey 7 on No. 18 damaged his round. Shuping’s 40-39 — 79 included a birdie. Sprinkle, a sophomore, didn’t make a birdie, but he shot a steady 41-42 — 83. Rollins also checked in at 83 (41-42), while Queen shot 41-43 — 84. Queens and Rollins made a birdie apiece.
“I made a putt from about 15 feet from the fringe of the green on No. 16 for the birdie,” said Rollins, the first Mustang off the tee at 10 a.m. “Coach Teems just kind of looked at me, and we both had a laugh.”
The most relevant thing about Monday is the Mustangs finished eight shots back of 3A defending champion Forestview.
Myers Park, a perennial 4A power, led the way, shooting 299 to beat Charlotte Christian by eight shots. Arden’s Christ School and Cabarrus powerhouse Cannon School tied for third, 14 shots back of Myers Park. Cannon’s Michael Childress, a sophomore from Salisbury, shot 79.
At the recent Palmetto Invitational in Myrtle Beach, East Rowan was strong in friendlier weather conditions against a nationwide field and placed fourth. Lyerly shot 67-71 — 138 in that tournament.
Locally, the Mustangs have dominated all season. They’ve played in five South Piedmont Conference matches. They’ve won all five.
“We’ve all been playing well in the conference matches,” Rollins said.
There will be 10 SPC matches with each team hosting one. The Mustangs have league matches at Warrior and Crescent this week, so they won’t have to leave the county.
East’s success means as much to Rollins as anyone, as he expects this to be his last fling with competitive golf. He plans to head to East Carolina as a normal student, while Shuping, one of his best friends, plays for the ECU golf team.
“Logan is the one who introduced me to golf,” Rollins said. “We were in the sixth grade when he got me into it.”
Rollins played baseball with Lyerly growing up, but they decided to trade in their bats for golf clubs. That decision has put the Mustangs in position to challenge for a state championship.
“Our biggest focus now is the Midwest Regional (early May, Asheboro’s Pinewood Country Club),” Rollins said. “We’ve always got the toughest regional, with teams like Marvin Ridge (third in 3A last season) and Cuthbertson. We’ll have to play well to qualify for state.”
The 3A state tournament is set for the Country Club of Whispering Pines in Pinehurst on May 9-10.
East expects to be there. Monday’s challenging test in Durham was golf’s version of tough love, but it was necessary preparation for the pressure-packed rounds that lie ahead.
“We had big galleries and great competition,” Rollins said. “It’s going to help us.”