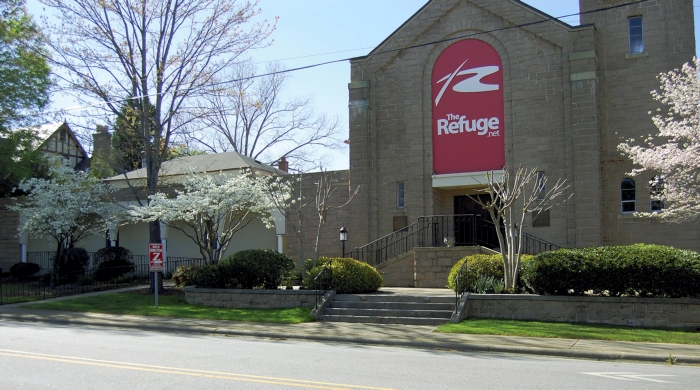 The Abbey, a wedding venue, is seeking a change to its zoning overlay to allow church services to continue. Amanda Raymond/Salisbury Post

A petition is going around the Ellis Street Graded School Historic District opposing a rezoning request for a property on North Fulton Street.

Local attorney Graham Carlton organized a meeting of neighbors in the district who oppose a rezoning request to operate a wedding venue at the former Sacred Heart Catholic Church at 128 N. Fulton St. About 21 people met on Thursday night to discuss potential issues.

“The proposed RMX-CD rezoning of this property bounded by North Fulton, West Council and North Ellis streets will create a use that is out of character with the surrounding churches, historic houses and current uses,” the petition states.

Lori and Michael Dienfenbach have petitioned the city to rezone 1.5 acres of land from an urban residential district to a residential mixed-use district with a conditional district overlay to convert the church property into a wedding venue.

Along with developing the sanctuary, reception and catering kitchen areas, later stages would include converting buildings on the property into a support services center, an indoor gathering space with a rooftop terrace and a bed and breakfast.

The support services center would include retail that would relate to wedding functions, such as a bakery, wedding dress boutique, tuxedo rental store or florist shop.

The applicants are also proposing to remove the mobile units in the driveway of the property to allow access from North Ellis Street. They are not proposing demolition of any buildings.

At a Salisbury Planning Board meeting on March 8, Lori Dienfenbach said the venue would draw about 50 percent of couples from out of town. She said she expected about 80 weddings annually, with most occurring on Saturdays. The venue would also be open for weddings on Fridays and Sundays during peak seasons.

After a Planning Board committee met with the applicant and neighbors to discuss some issues, the board recommended approval of the venue under two conditions: Sunday hours of 9 a.m. to 6 p.m. for the support services building and the source of any lighting on the rooftop terrace not be visible from the second floor of adjacent properties.

A maximum of 200 guests would be allowed on the campus at one time. The venue would also not allow live or amplified music on the rooftop terrace.

Board member Patricia Ricks said the applicants presented plans showing 198 potential parking spaces near the venue, both on-street and off-street.

The rooftop terrace of the venue looks into the second floor window of Carlton’s house, which is his daughter’s bedroom. The applicants have proposed building a screen along the south side of the building to help solve that problem, but the wall does nothing for noise, Carlton said.

Neighbors also talked about potential problems emergency vehicles may have getting through streets crowded with parked cars.

Carlton said he believes the retail part of the venue would have “the largest impact to the neighborhood.”

“This is a long-term impact,” he said.

He said he was afraid that once the city opens the door for retail to move into the neighborhood, it would change its character.

“That, I would contend, would invade a neighborhood that is not retail currently and would be detrimental to the nature of the neighborhood,” he said.

Tom Wolpert, who lives at 500 W. Council St., said he was worried that other kinds of retail businesses could move in if the venue does not work out.

“Let’s say we put those shops in there and they don’t do well,” he said. “What do we do with it?”

Wolpert also said he thinks noise will be a problem. Even though the venue would have a shutdown time of 10 p.m., Wolpert said that does not mean people will leave at that time.

Wolpert said the city is proud of its historic districts and works hard to maintain them, and the venue would compromise the effort that was put into the neighborhood.

“It just affects the whole culture of the neighborhood,” he said.

Carlton said the rezoning would also go against the city’s Vision 2020 Comprehensive Plan because it would not match the other uses of properties in the area.

There are professional services and financial institutions in the area, “but nothing as intensive as retail open to the public,” Carlton said.

Carlton also said that the retail businesses being proposed with the venue would not serve the immediate neighborhood as other businesses introduced into neighborhoods do.

At the meeting, Carlton said neighbors discussed the need to establish a new retail zone when there are vacant properties in established retail zones.

“To introduce a commercial enterprise … together with retail units of up to 3,500 square feet each, would not be protective of our community and historic properties and is not in keeping with the spirit of the city’s 2020 Plan,” the petition said.

Other neighbors talked about issues with noise, parking and the impact retail businesses could have on the neighborhood during the public comment session at the Planning Board meeting.

Carlton said most adjoining residences and other neighbors have already signed the petition. They hope to present the petition when the rezoning request goes before the Salisbury City Council on April 19.