The Dart: Homeless in Salisbury 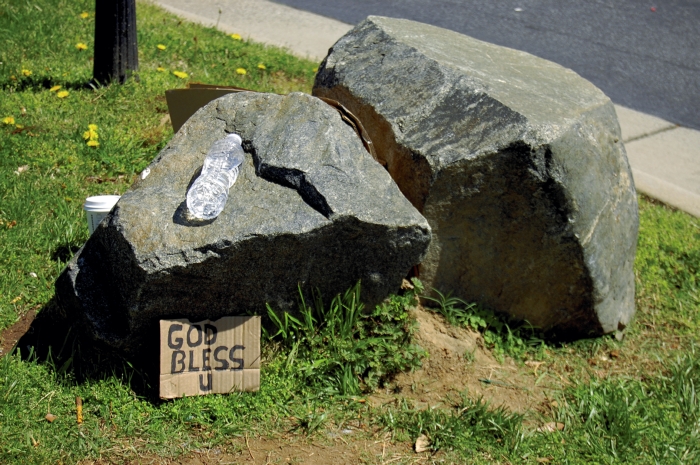 Amanda Raymond/Salisbury Post Dean, homeless since October of last year, said he hopes to save up enough money to get a "full-time home."

Dean stands on a corner of a high-traffic shopping center, holding a sign that says “God Bless U.” A car stops at the corner, and a man comes out of the passenger seat to give him a few dollars.

The woman driver, smiling, asks Dean if he remembers her and her daughter previously giving him coffee. He says he does.

Dean shakes the man’s hand and says, “God bless you.”

Dean has been homeless since October or November of last year. He asked that his last name not be printed.

He lived with a friend for a few months, but had to move out onto the streets after that did not work out.

Dean has lived in the Salisbury area for his whole life. He used to lay bricks, but since major back surgery, he has not been able to find work. And he said a “falling out with family” led to his being out on the streets.

Every day, Dean heads out to different locations to try to make a few bucks to get by. He said he usually makes about $40 a day.

He said because of his health problems, including a week’s stay in the hospital from a heart attack, he has not been able to find a job.

Dean said he has not yet been to a shelter. He said the cold winter weather was tough, but he and his roommate got through it.

“By the grace of God we made it every night,” he said.

On Wednesday, his roommate was standing at the adjacent corner. Dean said that corner was so popular that people did not even have to hold signs — everyone knows if you are standing on that corner, you need help.

People don’t just give money. Dean said he will sometimes receive coffee from Starbucks and food from Chick-fil-A.

If Dean could find a job, he said he would want to go back to laying brick or construction because he loves the outdoors.

For now, he and his roommate are trying to get enough money to find a place to live.

“I would like eventually to get myself straightened out and get a full-time home,” he said.

Call for backup: RSS searching for ways to teach…