In training exercises, rescuers do the heavy lifting 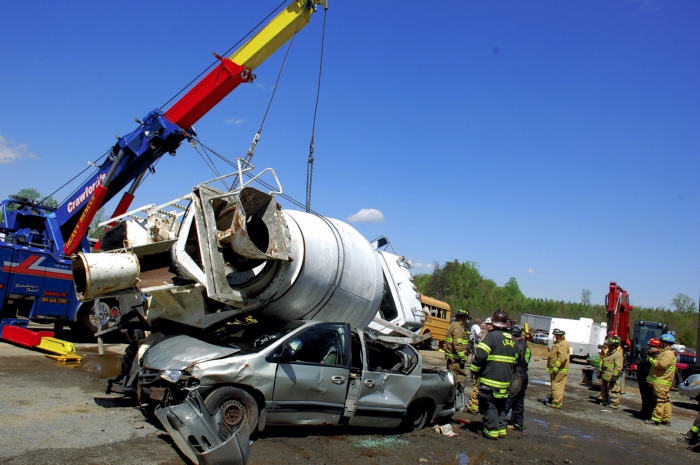 Mark Wineka/Salisbury Post In this scenario, rescue personnel must extricate people from the van, whose top has been crushed by an overturned cement truck. The cement mixer will be lifted off the van by the arm of the 75-ton rotator truck of Crawford's Garage. The training Saturday was sponsored by the Rowan Rescue Squad and Locke Fire Department.

SALISBURY — This did not look pretty. Thankfully, it was only a training scenario.

In a grinding crash, a car had plowed underneath the front of a school bus, trapping people in the vehicle. But it was worse. A motorcyclist failed to avoid the accident, and he and his bike were wedged under the bus in back.

The right side of the bus was off the ground and unstable.  The bus was not only heavy, it was top-heavy.

The job in front of rescue personnel was obvious. Free the motorcyclist and extricate the victims in the car, but doing so would take stabilizing the bus and also figuring out how to lift it.

“This is a challenge right here. It’s one of those things where you’ve got one chance to do it right.”

This is the third year Cress of the Rowan Rescue Squad and Chief Rusty Alexander of Locke Fire Department have teamed up to offer local firefighters and rescue workers this kind of training.

“We’re subject to this happening any day in Rowan County,” Cress said, watching the scenarios play out.

He noted all the heavy vehicles  — from tractor-trailers to cement trucks, from school buses to tour buses — constantly on local roads.

“What we practice is real stuff,” Cress said. “… When you pull up on a wreck, you don’t know what you’re going to have.”

Saturday’s training was helped by donations of a school bus from the county’s bus garage, a cement truck contributed by Chandler Concrete and several junked cars provided by Crawford’s Garage, which also furnished its 75-ton rotator lift truck.

The scenario with the school bus represented what Cress called an “underride,” because the car (and motorcycle, for that matter) ran under the heavier vehicle.

Stabilization had to come first. In the school bus exercise, the participants acted on the assumption a lift truck was not available. They used wood cribbing to stabilize the bus before jacks and airbags were used for the lifting.

They also practiced tunneling — making a clear, direct path — to the victims in the car.

In another scenario nearby, a concrete truck with a heavy cement mixer in back had overturned onto the top of a van. In this exercise, the rescuers would be aided by the Crawford lift truck, thought to be the biggest truck of its kind in Rowan County.

Cables from the rotating, crane-like extension arm of Crawford’s big truck were attached to the concrete truck, which was teetering on its side. Again, stabilization had to come first.

After it was stable, the cement truck could be lifted safely off the van, which had victims inside still alive.

Once the lift occurred, the rescuers planned to pull the van out of the danger zone with a winch and cable fastened to the front of the vehicle.

“They’re doing exactly what I would do,” Cress said, watching the exercise. “Winch that car back to safety, then I would extricate the victims.”

Paul Bost of Crawford’s Garage maneuvered the arm of the 75-ton lift with a remote control hanging from his neck. That remote control ability is important, Cress said, because Bost can stand right next to the rescue team — and not back at the truck — and easily hear instructions.

Cress emphasized how the situations rescue squads and firefighters confront in real life can be even more precarious, simply due to topography.

“We’re never on a flat road,” Cress said. “When we do this stuff, you usually have a ditch or embankment.”

“I travel all up and down the East Coast with this,” said Heath Haywood, one of the teachers, who also is a fireman in Greenville County, S.C.

“I promise, those people learned a lot,” he added.

The biggest benefits of being able to offer this training here are possibly saving lives in the future, plus the financial side of not having to go elsewhere.

If this same group had to travel, it would be a minimum of 20 hotel rooms, not counting meals and mileage, Cress noted.

The exercises also encourage cooperation and camaraderie among the various departments.

Cress said he and Alexander probably will plan another advanced class for the fall.