Partners in Learning extravaganza proves Legos ‘are for everybody’ 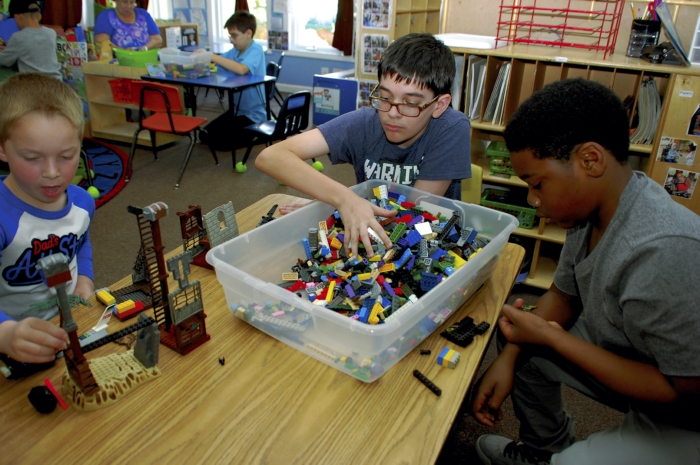 SALISBURY — You were invited to a “Lego Extravaganza?”

“That just means you have Legos everywhere,” Cindy Webb said.

And she was right, as 44 children, from pre-kindergarten through the fifth grade, showed up for Partners in Learning’s first Lego Extravaganza Saturday morning. Open to the public, the extravaganza was pretty much a construction free-for-all.

“They build whatever they want,” said Administrative Assistant Emilie Scharf, explaining how there also were models to replicate and instructions to follow, if preferred.

Parents and staff members pitched in, as needed, but the majority of kids liked to do their own engineering.

Cousins Davis and Mason Overcash, 5 and 6 respectively, were building their Lego “hideout” together. They strategically placed a treasure chest at the top of a long tower for security reasons — it would be difficult for anyone to reach — and they also installed a platform at the top, highly sensitive to whether you were a good guy or bad.

Nearby, Ahmiel Torrence was sifting through a box of Lego parts, looking only for black pieces, which he planned to use in building a submarine.

Partners in Learning promotes Legos as providing tools that help develop a child’s lateral thinking — in a fun way.

Other benefits of building with Legos include improving literacy, as kids read from instructions; development of problem-solving, organization and planning skills; the enhancement of communications and critical thinking; and the boosting of motor development.

“Legos are for everybody,” staff member Katherine Generaux said. “It doesn’t matter about age (or stage) of development.”

Children from Salisbury to Kannapolis participated in the Lego Extravaganza, and at the height of attendance Saturday morning, the children had to be spread out over two rooms.