Dr. Rob — Live at the Meroney 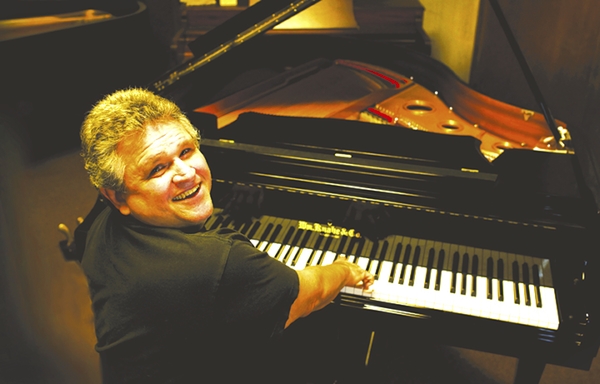 On Thursday, April 7 "Dr. Rob” will perform at the Meroney Theater.

On Thursday evening, April 7 at 7 p.m., Dr. W. Dwayne Robertson, known to area citizens as “Dr. Rob,” will perform a music concert at the Meroney Theater. The program is sponsored by Rowan Helping Ministries, and all proceeds will go to the organization.

During his career, Dr. Rob has performed in many U.S. states and in venues such as the Governor’s Mansion and the Biltmore House. An award-winning pianist, he recently won the silver medal at the SilverArts state competition in Raleigh. Dr. Rob has often received standing ovations from capacity crowds, as he is known for his unique and dynamic performance style full of energy. In most of his shows, he interacts with the audience and incorporates some humor. Having been featured at times on television and radio, reviews of his performing have included such comments as “Electrifying… masterful playing…a virtuoso exhibitionist!” (Statesville Record & Landmark); “A great musical inspiration for all…”(WSIC radio); “Dr. Rob should be called ‘Entertainer of the Year!’” (WBTV); and “Where does he find the energy!?” (WBTV).

Featuring a rich variety of music, the program will range from sacred, patriotic, and ragtime selections to pop music and the music of Broadway and Disney. Included will be music from Cats, Jesus Christ Superstar, Phantom of the Opera, Les Miserables, The Sound of Music, The Little Mermaid, Beauty and the Beast, The Lion King, and Aladdin.

Songs of Elton John, John Lennon, and the Eagles will also be presented. And, of course, Dr. Rob will be up to some of his usual antics, such as playing the piano while lying down on the floor and a few other surprises.

Tickets may be obtained at www.rowanhelpingministries.org or at the Rowan Helping Ministries office at 226 N. Long St.

Q: What is it that people seem to like most about your programs?

A: I think it’s a mixture of elements actually. The music has a creative spin to it, there is a lot of high energy or electricity in my performance style, and I try to connect with my audience with some light-hearted humor and banter.

Q: What are some of the most memorable comments or highest praise you’ve received for your performing?

A: Other than positive remarks in the media, I would say the most memorable comment that stands out is when people have told me that they’ve paid top dollars for seeing shows at Myrtle Beach or other venues which weren’t any more entertaining than programs I’ve offered to the public for free. That makes performing worth it to me!

Q: Why have you not considered performing full-time?

A: I’ve actually had a lot of people ask me that, saying I could have made a fortune at it. I’ve even had a few people ask why I have wasted my life teaching when I could have made more money performing. And that bothers me, because shaping the lives of young people, our future leaders, is not a waste of time. I’ve had the pleasure of enjoying it all…teaching…performing…writing books…and so on. I truly don’t think I would have enjoyed a life of performing. Don’t get me wrong, the attention is fun. Although I don’t consider myself photogenic, photo sessions for events are always interesting. I find interviews intriguing. And I enjoy signing autographs, whether for my performing or for my books. However, I’m a stay-at-home kind of guy who likes to come home to my family each night and sleep in the same bed. A life of traveling and staying in motel rooms is not my thing. Other than the enjoyment of teaching, teaching has allowed me some stability in my life with a retirement pension.

A: A lot of places, actually, but the place that stands out as the most beautiful setting was the Biltmore House, with the lights of Christmas and tons of poinsettias and other plants all around me. Simply lovely! However, I am VERY excited about my upcoming gig at the Meroney. If you haven’t been to it, people around here really do not realize what a historic treasure and cool performing venue the Meroney is!

Q: Have you always found success in music to come easily, perhaps even naturally?

A: Well, as Einstein said, success is 1% inspiration and 99% perspiration. I suppose that I do have a knack or talent for it, but I almost didn’t get out of the starting gate. When I was a freshman music major at UNC-G, I spent hours and hours per day shooting billiards and became quite the university pool shark. I was hitting all kinds of trick shots, and only one other person in the school could beat me. However, I made a C+ on my piano jury exam that semester. After a stern talk by my piano professor, the pool cue was set aside and I spent hours and hours per day practicing the piano from there on.

QUESTIONS SPECIFIC OF THIS CONCERT:

Q: What have you done specifically to prepare for this concert?

A: I have undergone an intense practice regimen, along with dieting. I felt I was too out of shape to attempt to do a concert of this magnitude, so I’ve lost over 45 pounds in the last three months. I try to go through the program each day, but don’t always get to it.

Q: How long is the program?

A: Believe it or not, it comes out almost precisely the same each time that I time the music—an hour and seventeen minutes. That, of course, excludes introductions, banter with the audience, and the intermission. All in all, it’s a good full evening of around one hour and forty-five minutes.