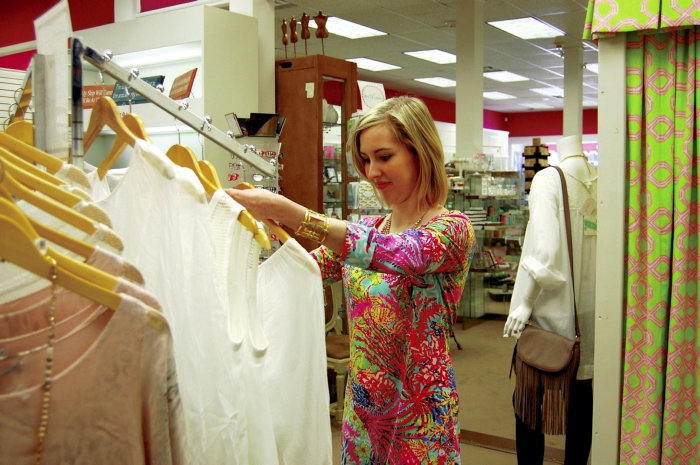 Lesleigh Drye was a French major in college and lived in France for a time, so her business partner, Missie Alcorn, asked her to come up with something in French to be the name of their new store.

“I had this list of all these words that had anything to do with gifts or design,” she said.

“Caniche” was one of the names on the list that Alcorn liked.

They decided to go with it, making a pink poodle their mascot and giving the shop the tagline, “A girl’s best friend.”

The store has always been in the same location — 200 S. Main St. It offers fine gifts, jewelry, accessories and apparel. There is also in-house embroidery and vinyl offered, and many products at the store can be personalized.

Drye said she had always wanted to have her own storefront. She was in business with a friend for about six years selling jewelry and gifts at home shows, but they decided to sell that business.

“We just joined forces and decided to go for it,” she said.

Drye said the store has offered the same types of products since its start, but the styles have changed over the years.

“We try to evolve with the times,” she said.

They started using the upper level for a bridal room in 2015. There are six brides registered with Caniche.

“We’re hoping that it will fill a void here in Salisbury,” she said. “There’s not really anywhere that offers the personal service that we’re trying to offer here as far as the way it used to be done.”

It was only in the last four or five years that the store began offering apparel.

“We don’t carry a ton, but we carry, I think, a nice selection. If you just want to freshen up your wardrobe a little bit or you need something fun to wear out on a weekend, we can usually help you out there,” she said.

Drye said she and her employees work hard to provide good customer service, from ensuring a good shopping experience to wrapping gifts in just the right way.

“Training someone to work here, that is the hardest part, getting them to be able to wrap with consistency and (at a high) level,” she said. “There’s a lot to gift wrapping.”

Drye said how gifts are wrapped is a reflection on the store, and if people see a perfectly wrapped gift that came from Caniche, they might want to stop by the store themselves.

Gift wrap that is covered with the Caniche name also helps the store get its name out into the public. Despite being open in the same location for 10 years, locals still come into the store asking when it opened as if it was a new store.

“These aren’t people from out of town, these are people from Rowan County who have no idea that we’re here,” she said.

Drye said it is important to keep things fresh for customers. She tries to learn new ways of advertising and marketing, as well as keeping up with current trends.

She gets help from a small business retail expert and Taylor Rogers, who helps with sales and marketing. Drye also gets valuable information from customers.

“If somebody comes in here and wants something or thinks we should carry something, I find a way to get it as fast as I can,” she said. “Sometimes your customers are the ones that know what’s out there.”

It hasn’t always been easy; Drye said the store struggled like other stores did during the economic downturn, but they “didn’t want to give up.”

Drye said the downtown businesses have worked together to encourage people to shop locally, and she loves being a part of that.

She said with Alcorn by her side, and help from Rogers and Jennifer Seifert, office manager, the store has been able to make it to 10 years of business.

“We’ve had some failures, but I think it just made us try harder to be successful,” she said.