‘A small part of a big community:’ Once almost broke, painter’s business has a new hue 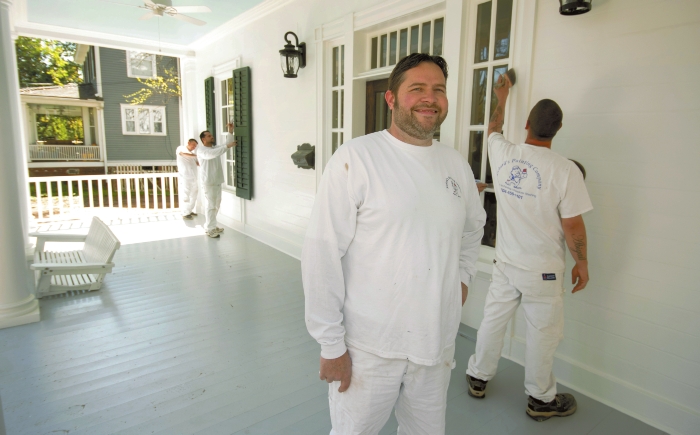 JON C. LAKEY / SALISBURY POST Richard Gould, owner of Richard's Painting Company, with some of his crew at a historic home in Salisbury that they just completed.

SALISBURY — Richard Gould said when he moved to Rowan County in 2007, he figured it wouldn’t take him long to make a name for himself as a painting contractor.

That was Gould’s profession in his native New Jersey where he owned a painting business.

“I was doing so well in New Jersey, I thought, ‘How hard could it be here?’ ” Gould said. “I was mistaken.”

Part of the problem was timing and Gould wasn’t the only one hurting.

When he arrived in North Carolina, the national economy was experiencing its biggest downturn since the days of the Great Depression. Builders weren’t building and painters weren’t painting. Virtually no one involved in the construction business had much in the way of work.

So Gould did what he could, starting by purchasing houses that were in foreclosure and renovating them with hopes of making a profit through resell. He was fairly successful, but it was a slow go.

“I was ready to go back home,” Gould said. “I was almost broke.”

It hasn’t been an overnight happening, but things have gradually turned around. Gould’s business, Richard’s Painting, now has a staff of 15. The business is involved in residential painting, but Gould’s clients also include such well-known local businesses as F&M Bank, Food Lion and Catawba College.

Business has improved so much that Gould is at last moving his operation out of his home in China Grove and opening an office near downtown Salisbury. A ribbon cutting at the business will be held April 8.

“I’m grateful to know I’ve been at the bottom and worked my way back up,” Gould said. “It makes me more appreciative of where I’m at now.”

Gould, 41, relocated to Rowan County because he had a brother who lived in Lexington and friends who lived in Huntersville.

He sold his business in New Jersey and he and his wife, Christine, hit the road.

“I figured Rowan County was pretty close to the middle between Lexington and Huntersville,” Gould said.

He said the uptick in his business began through perseverance and a commitment to quality work. A number of acquaintances also helped.

Gould said he did some work for Chad and Jeremy Vriesema of Central Piedmont Builders. The Vriesemas in turn introduced him to Paul and Steve Fisher at F&M Bank and Gould eventually landed work there.

That association led to referrals to the powers that be at Catawba College and more opportunities.

“One job led to another,” Gould said. “As long as you do a good job, people will recommend you to others.”

Frances Taylor is project administrator for Catawba College and before that worked as contract provider for F&M Bank. She’s hired Gould for a number of projects, both big and small, and said she’s never been disappointed by his work.

“He’s very quality conscious and on larger jobs has the ability to pull in the staff he needs,” Taylor said.

She said Gould isn’t always the cheapest, his bids sometimes coming in slightly higher than his competitors. And Taylor said Gould is not the type to be rushed through a job.

“If you need a guy to do quick work, you don’t need Richard,” Taylor said. “If you need someone to do quality work that’s going to hold its value, Richard is your man.”

The trouble is, grocery stores don’t shut down to accommodate the work of renovators. Gould said his painters basically start to work when a store closes and continue through the night until the business reopens the next morning.

But it’s all part of the challenge of the business, Gould said, and he’s happy to have the work and the challenges that come with it.

“At the end of the day, I’m pretty proud of what we’ve done and where we’re at as a business,” Gould said. “I’m proud to be just a small part of a big community.”

Open house: There’ll be an open house and ribbon cutting at Richard’s Painting, 112 E. Council St., Salisbury, at 11:30 a.m. on April 8. Food and beverage will be provided. The public is invited.