Call for backup: RSS searching for ways to teach kids with behavioral problems 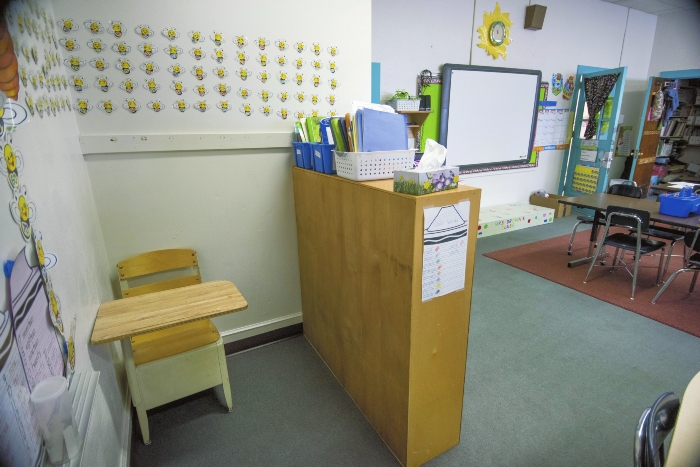 Terri Brown, an Exceptional Children teacher at Rockwell Elementary School, uses several techniques to handle children whose behavior disrupts class. The school desk in the corner behind a bookshelf is used when other techniques fail. The bookcase is bolted to the wall to make sure that it can not be pushed over. Jon C. Lakey/Salisbury Post

It was a Monday morning when Hurley Elementary Instructional Assistant Paula Hodges saw a student from her first-grade classroom standing by the front entrance of the school. He should have been in class. The student had run from school before, she said, tearing out of the building and down the road, and she was worried he’d run again.

But when she tried to get him to come back to class, the student got angry. And then he punched her. He’d tried to attack other students before, she said, and had meltdowns where he threw chairs and a desk across the room. Hurley doesn’t have a school resource officer, so when he struck out at her, Hodges called 911.

“I called for backup the best way I knew to get help,” she said.

He was the kind of student Superintendent Dr. Lynn Moody calls a “runner” — a child who does “very defiant things” such as running from school or lashing out at teachers or peers. Runners, and other students with severe behavioral issues, are a puzzle the school system is struggling to solve.

“I think the challenges of the elementary schools are more difficult than they have ever been and I can’t tell you why . . . I can tell you that we have more challenging behavioral issues at the elementary school level in the last five years that I’ve seen that are very unique that we haven’t dealt with in the past. So we’re struggling with trying to figure out how do you deal with those,” Moody said.

And the numbers are on the rise. In its annual crime and violence consolidated data report, the North Carolina Department of Public Instruction reported six assaults occurring in Rowan-Salisbury elementary schools in the 2014-15 school year: one assault with a weapon and five assaults against school personnel, not counting sexual assaults. In the 2013-14 school year, there were two.

“I’m not talking about a lot of students,” Moody said. “I’m talking about a very, very few students. But their chronic behaviors are more serious than I’ve ever seen at the elementary level.”

The child who struck Hodges had outbursts frequently enough that other students were afraid of him, Hodges said, and were afraid to come to school. She felt like she, and the other children in the classroom, were not being protected.

“I fear for these children. And I don’t feel like — they’re not being taken care of properly,” she said.

It’s a struggle other teachers are familiar with, as well. Terri Brown, an Intensive Common Core (ICC) teacher at Rockwell Elementary, said she’s earned her fair share of bruises from students. She’s even called the cops.

“If it gets bad then we do call the authorities,” she said.

Brown teaches children who are falling at least two grade levels behind their peers, academically. Brown’s class falls under the Exceptional Children umbrella, but often, kids from regular education classes who have severe behavior issues end up in her class, as well. An ICC class isn’t the right place to help those children, she said – but at the moment, there’s nowhere else for them to go.

“Separate settings have historically been a dumping ground . . . it’s just a ‘what do you do?’” she said.

But Brown loves teaching and figuring out the puzzle that is a child’s brain — that means students with behavior problems, too. She keeps a record of everything, “the good and the bad.” That includes the times she’s called law enforcement.

When a child in Brown’s classroom has a meltdown, she clears the room and calls her administrator. If they, or a parent, can’t calm the student down, they can – and will – call the police if they believe the student represents a real danger to themselves or others.

She said that sometimes, if it’s just a behavioral issue, seeing a uniform will snap a child out of an episode when nothing else can reach them. Normally, teachers, like Brown, contact their administrators and the child’s parents before calling law enforcement – often it’s the administrator who places the official call.

“You can imagine the chaos in a school that if a teacher directly calls 911. And then the school would go automatically into a lockdown situation, over something that may or may not require a lockdown,” Moody said.

But Hodges said she felt her administrator wouldn’t respond to a call for help. Captain John Sifford with the Rowan County Sheriff’s Office said there’s not a lot the deputy could have done.

“It would be extremely rare for a charge, unless very serious in nature, to be made against a 6-year-old . . . That is probably why the deputy stated that court was not the proper place for this matter to be dealt with. It was certainly a discipline problem that the parents and school should work out,” he said in an e-mail.

Emily Coltrane, Piedmont area administrator for the N.C. Department of Public Safety’s Division of Adult Correction and Juvenile Justice said that there were “several variables” law enforcement officers consider when responding to a situation at a school, including the child’s competency, past offenses, mental health needs and parental support.

“If the officer feels like it is being handled appropriately by the parent or school then he doesn’t to file and/or can refer juvenile to agencies himself. Filing a complaint does document behaviors even if the case is closed with no further action,” she said in an e-mail to Rowan County Sheriff Kevin Auten.

For Brown, calling law enforcement is one more step in the paper trail she leaves for system administration. If it’s long enough, she hopes she’ll be able to find a program or a schedule that works for her kids – whether that’s a half day for a student with difficulty focusing or a therapeutic setting that can handle “acting out.” But proving that students need that kind of intervention can take months.

“We have seen where it can take a whole school year,” Brown said.

In the meantime, the teacher, the student and the rest of the class are stuck. Brown said Rowan-Salisbury has counselors and behavior specialists, but they’re not located within each school, and the system doesn’t have a self-run program to help students with behavior problems.

Currently, the system focuses on prevention. This past year, the system held professional development on crisis management and de-escalating situations. Moody said most schools have some sort of program to help smooth over the rough edges of disciplinary issues, or stop them before they start.

“We have lots of programs and professional development and things to help with classroom discipline. Do we need more? Yes. There’s not a question about it. Is this a topic that you should be talking about and working on all the time? Absolutely. This is something that you continuously need to improve because students change, their behaviors change, the way they are wired changes,” Moody said.

But they don’t always work. Hodges said the student who struck at her was part of Hurley’s MOVE program – a rehabilitation program that aims to teach students with behavioral issues coping strategies. The 6 year-old student allegedly told Hodges he hated being in the program, and Hodges claimed she’d seen other discipline issues result from it.

“All it did was cause an uproar in the school,” she said.

Hurley Principal Karen Anderson declined to answer questions about the MOVE program, or the incident in which the student struck Hodges.

But when a school has exhausted all possible, available routes, what happens?

“Then that becomes the question, you know, ‘Then what?’” Moody said.

The school system can refer children with chronic, severe issues to Crescent Academy, a six- to nine-month day program run by Nazareth Children’s Home. But not every student referred is eligible to join, and it’s not free.

“Not every kid who acts out has Medicaid,” Brown said.

And the school system has no therapeutic behavioral program of its own, Se’Quan Norman, case manager with Crescent Academy, said. The system’s previous behavior program was shuffled over to Crescent Academy when the system wanted to add a therapeutic component, she said.

It’s not a problem school administrators are unaware of. A discipline committee was formed at the beginning of the year to review the district’s “policies, procedures and practices on discipline” and to “make recommendations to the RSS school board about research-based methods to help increase positive student behavior,” committee Chair April Kuhn said in an e-mail.

And during an early 2016 meeting, the Rowan-Salisbury Board of Education voted to appropriate funds to hire two behavior specialists, but Moody said they were unable to fill the positions.

Since the incident, Hodges said school system officials have come to Hurley to talk with her about possible solutions. She said she’d made recommendations – including parent involvement and more official oversight – but she knows it won’t be an easy fix.

“If there’s an answer — if someone has it — please give it,” she said.

In the meantime, teachers are the first line of defense in a classroom. Moody said professional development and training were available to teachers who reached out, but admitted that it may not always be successful.

Discipline and disciplinary issues can be frustrating for teachers and students. And when you’re dealing with children, who all have multiple needs, “there is no simple answer,” Moody said.

But Hodges said that something needs to be done.

“In order to educate these children, you can’t have this much chaos, and that’s all it is — pure chaos,” Hodges said.

Partners in Learning extravaganza proves Legos ‘are for everybody’