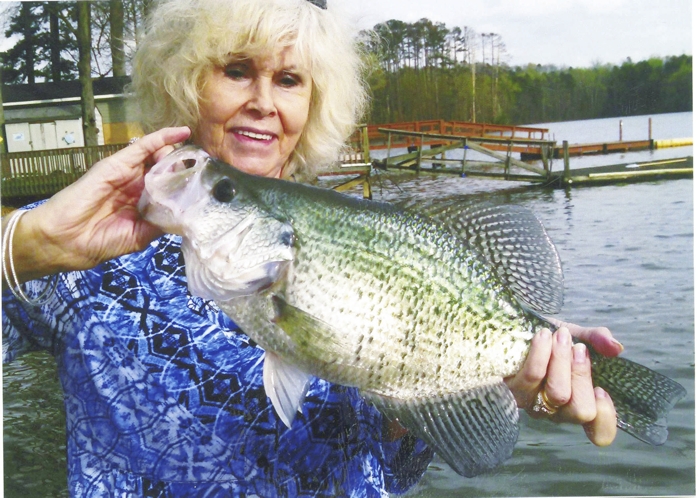 Submitted photo Lorene Smith, of Rockwell, caught this large white crappie on March 25 when she was fishing with her husband, Terry, on the Davidson County side of High Rock Lake. Lorene may have a new state record for a crappie as the fish measured 18 inches and weighed 4.25 pounds. According to the NC Wildlife website, the state record for white crappie is 3.15 pounds and for a black crappie, 4.15 pounds.

Whether Lorene Smith pursues the North Carolina Wildlife official record book or not, the Rockwell resident knows what she did on March 25.

Smith caught a 4.25-pound white crappie in High Rock Lake last Friday, and it appears to be a state record. The fish measured 18 inches long.

According to the North Carolina Wildlife Commission website, the largest white crappie caught in the state weighed 3.15 pounds, taken in a private lake in Wake County in April 2013.

Smith’s fish even topped the black crappie record of 4.15 pounds, a catch in an Asheboro city lake in 1980.

Smith and her husband, Terry, were fishing off a pier at the home of relatives, Jimmy and Trudy Hill, on the Davidson County side of the lake.

“I had a cast on my right ankle, so I was sitting in a chair,” said Lorene. “When I caught it, it pulled the end of my rod into the water and I couldn’t crank the reel by myself. Trudy had to help me get it in.”

Lorene said that after they weighed and measured the crappie, they noticed that it was carrying eggs. That’s why she threw it back into the lake.

“People have told me that I should have kept it, that I could have had her on plaque, but I hated to kill it and all those babies that would be nice to have in the lake,” Lorene said.

Lorene said that her husband was very happy with the catch and she credits him with tying a good knot on the hook.

“Those knots come loose sometimes, and I was so afraid that was going to happen before we got it in,” she said. “I knew that I had a whopper on the line, but I guess Terry had tied a perfect knot. He was jumping around, more excited than if he had caught it himself, I believe.”

Lorene said she hasn’t decided if she’ll try to claim a state record but was happy to find out that someone can do so without possession of the fish, as long as it was weighed on certified scales and there were witnesses to the catch and weighing.

“They can give me a lie detector test if they want to,” said Lorene, “because I really caught it. It was really beautiful and had eyes as big as quarters. Somebody said that she had to be an old, old fish to be that big.”