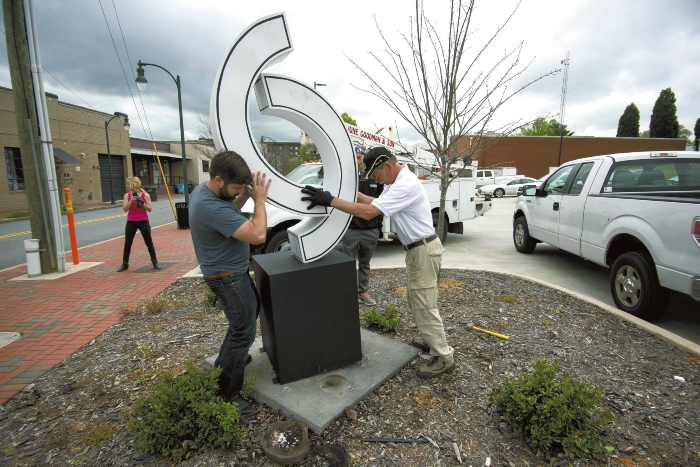 Artist Matt Amante gets some help from Randy Goodman in setting up his piece titled "Semi-Circle Balance Study #11" on the corner of Lee and Kerr streets to set up the latest Salisbury Sculpture Show. Jon C. Lakey/Salisbury Post

The Salisbury Sculpture Show is back for its eighth year.

The show consists of 18 different public art sculptures placed in Salisbury’s downtown and four colleges. The featured artists are from four different states, including North Carolina.

The Salisbury Public Art Committee organizes the event with funds from private entities, the city of Salisbury and the Salisbury-Rowan County Convention and Visitors Bureau. The committee also received grants from the Salisbury Community Foundation, Robertson Foundation and Rowan Arts Council.

Lynn Raker, urban design planner for the city, said the committee tries to raise most of its money by selling the art pieces, from which the committee receives a 25 percent commission. It sold four pieces this year.

The committee calls for entries in the fall and a selection committee picks the pieces that will appear in the show.

Although Friday called for bad weather, Raker said it did not rain while anyone was installing the pieces.

Matt Amante, with a sculpture called Semi-Circle Balance Study #11 at Lee and Kerr streets, said he wanted to deal with balance and form for his sculpture. He described the piece as minimalistic and conceptual.

This is Amante’s third year having a piece in Salisbury’s Sculpture Show.

“(Salisbury) is always one of my favorite places to install,” he said.

Robert Winkler has had a piece in the show for four years now. He has sold a few of his previous pieces to the city, which are now near exit 76 of Interstate 85.

He said his pieces are all based on geometry and different shapes and forms. Winkler does not have anything specific in mind when he creates his sculptures, but finds that people assign their own meanings and names to the sculptures based on what it looks like to them.

“I enjoy hearing what people see in them,” he said.

This year his sculpture, called Moving Along, is at the Gateway parking lot.

Cathy Perry does create her sculptures with particular meanings behind them. Her sculpture this year, Autumn Glory, is part of her “In the Garden” series, which portrays the harmony between plants and insects in gardens. Perry said her late mother inspired the pieces in the series.

“A lot of my pieces are a nod to her,” she said. Perry’s family members inspired many of her previous sculptures.

Her sculpture can be found at the Rowan Public Library.

Jordan Parah’s sculptures are also inspired by nature. Her piece at the F&M Trolley Barn, called Dancing in the Moonlight, was based on the moonlit sky.

Parah said she uses contrasting shapes and colors to represent her belief that all people are different but equal.

This is her first time having a piece in Salisbury’s Sculpture Show.

“I’m very excited to be exhibiting in Salisbury,” she said.

Lynn Raker said people in the city were skeptical of the sculptures during the first year of the show, but now people miss the sculptures once they are taken down.

“I’ve seen, over the eight years, an excitement grow,” she said.

A brochure with background information on the artists and the pieces, as well as a map of the locations where the sculptures can be found, will be available at the Visitor Center, Rowan Public Library, Rowan Museum and various shops and restaurants in the downtown Salisbury area.

The sculptures and their locations are: