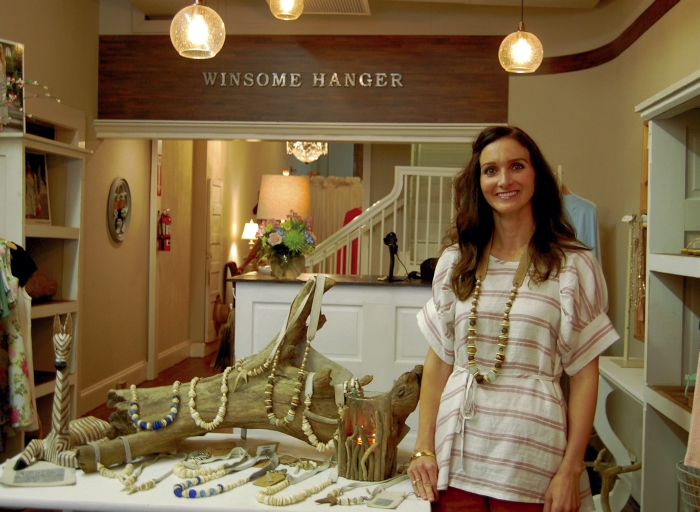 Amanda Raymond/Salisbury Post Melissa Hammer opened Winsome Hanger, a clothing and accessories boutique, at 105A N. Main St. after having a successful online boutique since 2014.

Winsome Hanger, a clothing and accessories boutique, is now open at 105A N. Main St. in downtown Salisbury.

The shop opened in 2014 as an online boutique offering women’s apparel and accessories.

Adella Apparel was previously in the location.

Melissa Hammer, owner of Winsome Hanger, said Sara Frick, the owner of Adella Apparel, decided to close her shop to spend more time with her family.

Although the online business was successful, Hammer said it was always her dream to open a storefront boutique.

“When Sara presented the opportunity to have a storefront, I thought, ‘Well, my fiancé and I bought our first home two months ago and we’re getting married this December so let’s throw a storefront in the mix,’” she said.

Hammer is a graduate of Appalachian State University and continued her education at Parsons School of Design at The New School in New York City.

She came back to Salisbury to open her storefront boutique because her roots are here. Hammer said her family moved to Salisbury when she was in high school. She got ice cream at Spanky’s Homemade Ice Cream & Deli and ate at Hap’s Grill.

“To actually have a storefront mixed in with all these places that have been established for a long time is just wonderful,” she said.

Her father, Nat Hammer, is the president of Hammer Truck Sales in Salisbury.

“He… instilled in me values about shopping local and supporting small businesses in the community,” she said. “Salisbury has been home to me and I thought, ‘What better way to come back and bring that big city feel to Salisbury and the downtown area.’”

It was her father who helped her come up with the name for the store. Hammer said when she was developing the logo, she knew she wanted to have a clothes hanger with some kind of “whimsical feel” associated with it. Her father suggested the word winsome, which means sweet or charming, to go along with it.

“So then we have the motto, ‘We make everything in your closet sweetly charming,’” she said.

The shop offers classic, conservative and sophisticated styles of clothing for women who are college-aged and older. There are shoes and jewelry available, and there is also a men’s selection, which was not previously offered in the online store.

“We know that the guys just get bored and immediately take a seat the second they come in, and we wanted to be able to have some options for them,” she said.

Hammer said about 90 percent of the brands that the shop carries are exclusive to Winsome Hanger. The store even carries some brands that were offered from Adella Apparel.

Hammer said she wanted to give shoppers a lively environment where they could bring their children.

“We have LEGOs for the kids to play with. I don’t want it to be an uncomfortable environment. I want (customers) to feel like they can come in and relax and take time for them and shop,” she said.

After studying for six years, Hammer said she is happy to have her dreams turned into a reality.

“It truly has been a dream come true. I’m sure everybody says that with their storefront, but it really is,” she said.

For more information about Winsome Hanger and to shop online, visit winsomehanger.com. The boutique also has a Facebook page: facebook.com/winsomehanger.

The Inn — ten years and counting