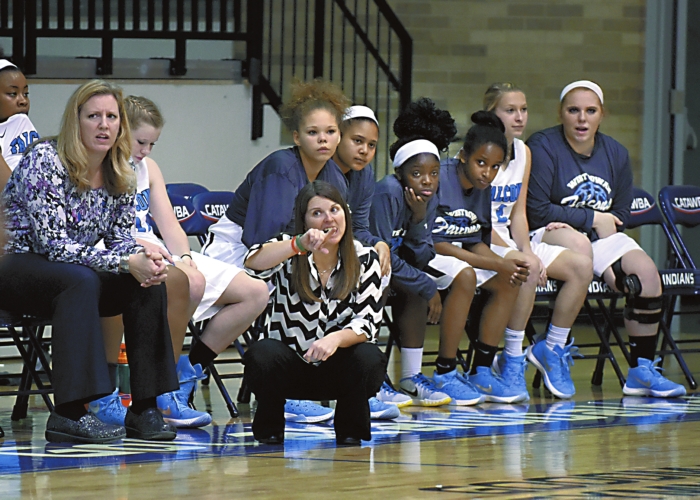 Wayne Hinshaw/or the Salisbury Post ... West Rowan coach Ashley Poole led the Falcons to a 27-3 record during the 2015-16 season.

SALISBURY — West Rowan coach Ashley Poole led the Falcons to hands-down, one of the best seasons in school history.

The Falcons were 27-3, won 19 consecutive games, which included the South Piedmont Conference championship, and advanced to the third round of the state 3A playoffs.

Based on those results, Poole is the Rowan County Girls Basketball Coach of the Year. However, she is modest and almost reluctant to accept the praise for West’s success.

“This is definitely a reflection of the team,” said Poole. “I couldn’t do without all 13 of those girls. I said at the beginning, that I thought we had a chance to be great team. I just didn’t think they’d be quite that great, but as the season went on and the team chemistry came together, I could tell there was something special about them.”

At least one of her players — Rowan County Player of the Year Khaila Hall, believes that Poole made the Falcons great and is very deserving of coach of the year honors.

“Coach Poole is more than a coach to me, she’s like a mom,” said Hall. “It was a joy to play for her. She brought so much energy and spirit to the team, even if we were having a down game, she’d come in there and make a joke and crack us up.”

“She brought just a whole different attitude and mindset,” continued Hall. “Even when we were down, she’d say, ‘if ya’ll want it, ya’ll can go get it,’ and that’s how it was.”

Poole has a long history in the county. As Ashley Boulware, she played guard on some strong Salisbury teams under coach De Batchelor. She played on the Hornets’ 23-5 team in 1994-95, which was led by star players Donna Carr, Carmen Weldon and Devina Dixon.

After college at UNC, Poole coach middle school girls basketball at North Rowan for eight seasons (2005-13) before West hired her as head coach for the 2013-14 season.

That first season was a learning experience that resulted in a 7-18 record, but the Falcons improved to 10-14 in 2014-15. This season’s great success puts Poole’s three-year career record at 44-35.

“The key this year was hustle, hard work and the team chemistry was big,” said Poole. “On any given night, I could have any one of our starting five step up and do big things. Everybody understood their role, whether it was playing 30 minutes and scoring 20 points or just being a great practice player. Everybody knew their role and there were no complaints.

“Everybody was all in and that’s what it takes,” continued Poole. “We always had dinner together before games and I felt that it was important to sit down and have that quality time with each other off the court. I believe that makes a difference.”

Another key to the season was beating SPC rival Hickory Ridge, probably the pre-season favorite, three times, including the the tournament championship game.

Poole’s team had started off the season 8-0 but laid two eggs in the Dale’s/Sam Moir Christmas Classic, losing to county rivals North and East.

“The Christmas tournament was a big hiccup, because we came in as the No. 1 seed and looked awful,” said Poole. “But it was a valuable learning curve for the girls because they went back to the gym and worked that much harder and fixed some things. It turned out to be a good thing for us, but that was one check mark for us that we didn’t get. They more than made up for it as the season progressed.”

The Falcons rebounded when school resumed after the holidays, beginning their 19-game winning streak with wins over Cox Mill and Davie County.

Now 10-2, the next game was at Hickory Ridge. Most people, based on the performance at the Christmas tournament, doubted West’s chances against the tall and talented Ragin’ Bulls.

“(The Hickory Ridge games) … I think we wanted it more,” said Poole. “We went out there and played hard, and they were really close games. We finished games well and played the entire 32 minutes. This team was really resilient.

“There were games that we got down 15, 16, 17 points, but the girls never got down and they believed in themselves, believed that they could finish games and win games,” added Poole.

After winning the SPC championship, West crushed Robinson in the first round of the playoffs, 67-22, and also won easily (79-60) in the second round against Ledford.

The streak and the season came to halt at home in the third round against Weddington, 71-70, falling short of an expected showdown with eventual state champion Morganton Freedom.

Poole has something to build on now at West, despite losing players like Hall, Martin and Miller. Egypt Alexander had a great season as a sophomore, making all-county averaging 17.6 points per game, and Mary Sobataka started as a freshman.

In addition, the West Rowan Middle School eighth-graders won the championship and has at least three players who could make the varsity as freshmen.

“We’re extremely excited about the future,” said Poole. “I don’t think you replace a player like Khalia — her leadership and talent — and Taylor with her hustle. We’ll look a little different next year, but there is some talent coming up. But the standard is pretty high now. We expect to win. Whether a team can do what this year’s team did or not remains to be seen, but we expect to win a lot of games and complete for championships.”

One of the West freshmen who has the potential to earn a roster spot is Poole’s daughter, Taylor.

“I’ve coached my daughter in AAU since she was in the second grade, so it won’t be a new experience” Poole said with a laugh. “We’ll butt heads a little from time to time but it’s all good.”

Taylor Poole, a guard, along with inside players Abigail Wilson and Cindy Connolly, led West Middle to the championship game win over Mooresville in January. Wilson is the daughter of former West Rowan and Florida State standout Wendy Hampton Wilson.

NOTE: While coaching at North Middle, Poole coached Aliyah Farmer and Special Washington, who went on to greatness at North High. Both are on this year’s all-county first team. … “They beat us in the Christmas tournament,” said Poole. “Everybody always thought it was this big, heated rivalry, but it really wasn’t. We have respect for each other, so it was always fun.”