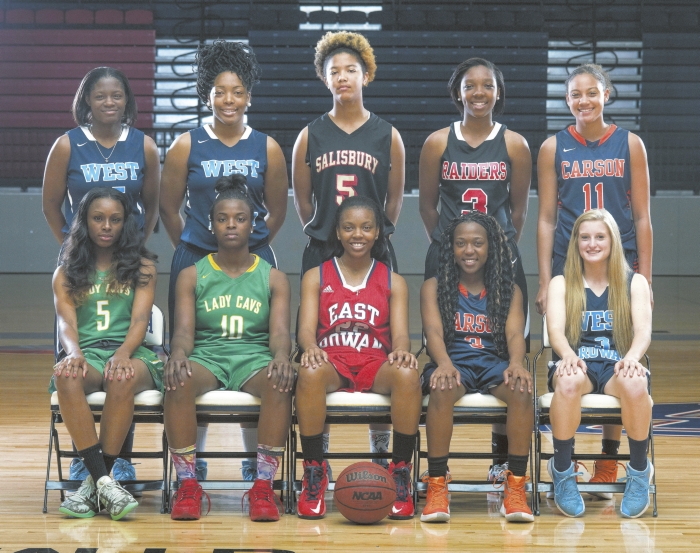 First team
Khaila Hall, West, 5-10 Senior Guard — The Rowan County and South Piedmont Conference Player of the Year averaged a modest 10.1 points, a lot less than previous years and a lot less than players of the year normally average.
But she was happy to trade points for wins as a senior and she did more things well than anyone in the county. She was one of the best rebounders, defenders and drivers — and she was the best floor general, ballhandler and passer.
West won more games than any team in school history (27). Hall’s leadership, especially in a 19-game winning streak that led to SPC regular season and tournament titles, was instrumental in that.
Hall scored 1,343 career points and ranks seventh in school history. She signed with D-I Longwood.

Aliyah Farmer, North, 5-9 Senior Forward — Farmer was runner-up for player of the year in the Central Carolina Conference as well as in Rowan County.
Farmer led a 19-8 team in scoring (16.3 ppg.) and rebounding. She basically was an undersized power forward, but her athleticism is right up there with Hall’s, and she gave the Cavaliers inside scoring and post defense. She couldn’t have been any more consistent, scoring in double figures 26 times in 27 games.
Farmer fell just short of 1,000 career points with 994 and ranks 10th in school history.

Egypt Alexander, West, 5-9 Sophomore Forward — Alexander will get better defensively and as a rebounder, but she’s already a special scorer. She’s a smooth lefty who runs the floor for layups and she piles up buckets on stickbacks and post-ups against taller opponents. Hall excelled at getting the ball to her in scoring position, and Alexander responded with 17.6 ppg.
Alexander’s 528-point season ranks No. 6 all-time at West Rowan. She made the All-SPC team.

Janiya Downs, South, 5-9 Freshman Guard — A co-captain as a freshman, Downs was the county’s scoring leader with 19.9 ppg. and is appearing on national lists of top prospects in the Class of 2019 for a reason. She’s long, she can score inside and out, and she can handle the ball.
Downs improved her shot selection and decision-making dramatically as the season moved along. She developed trust in young teammates, and the Raiders started getting positive results on the scoreboard. Four of the Raiders’ seven wins came in their last five games.
Downs made the All-SPC team.

Special Washington, North, 5-8 Sr. Guard — Washington averaged 15.1 ppg. with a mix of 3-pointers and transition layups and turned in the finest season of her four-year varsity career as a defender and passer. She was voted MVP when North won the Dale’s Sporting Goods Sam Moir Christmas Classic, and that’s always the marquee event of the season.
Washington finished her career with 1,097 points to rank No. 7 on the Cavs’ all-time list.
She made the Al-CCC team.

Second team
Olivia Gabriel, Carson, 5-3 Soph. Guard — Gabriel averaged 15.7 ppg., topped 20 points eight times and scored a school-record 39 to lead a win against South Rowan.
Gabriel also paced a 16-12 team in assists and steals. Her quickness gets her to the foul line a lot and she improved dramatically from her freshman year, shooting 64 percent from the stripe and cashing in 146 free throws.
She’s on the All-SPC team. In two varsity seasons, she’s scored 749 points.

Shenell Pharr, East, 5-5 Sr. Guard — Lightning on offense and defense, Pharr had the best season of her career, scoring 16.4 ppg. She led the Mustangs in steals and contributed 5.2 rebounds per game.
Pharr had 31 points in a win against South Rowan and scored in the 20s four times. She hit 44 3-pointers and her 404-point season gave her 850 for her career to rank 15th in school history.
She was voted to the All-SPC team.

Taylor Martin, West, 5-0, Sr. Guard — Martin scored 12.3 points per game with a combination of hustle and accurate 3-point shooting. She probably led the county in steals, deflections and collecting loose balls, and she made the difference in a half-dozen games in West’s history-making season.
Her 369-point season gave her 922 points in a three-year varsity career. She’s No. 14 on the Falcons’ all-time scoring list and is on the All-SPC team.

Bryanna Troutman, Salisbury, 6-0 Fr. Forward — An average night for Troutman was 13 points, seven rebounds and three blocks. She led a 14-12 Salisbury team in all three categories, as well as steals. She appears to still be growing, and she could have a huge future.
Troutman, who scored in double figures in her first eight varsity games, is on the All-CCC team.

McKenzie Gadson, Carson, 5-8 Fr. Forward — Long and springy, Gadson played a lot bigger than her listed height. She missed three games with an injury, but she came back strong and averaged 11.1 ppg. She shot 45 percent, one of the county’s best percentages, and led the Cougars in rebounding with 7.4 per game.
She was named to the All-SPC team.