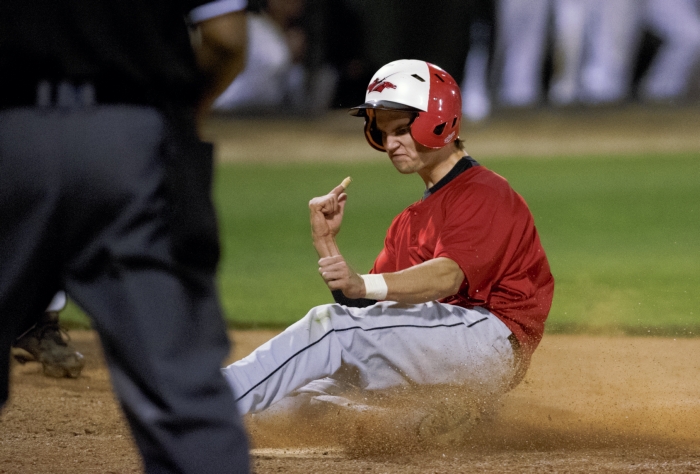 ALLISON LEE ISLEY/SALISBURY POST ... South Rowan’s Tyler Rary celebrates as he slides home with the tying run in the bottom of the seventh inning. Lake Norman had entered the inning with a 10-9 lead. The Raiders went on to win in the next inning, in walk-off fashion.

KANNAPOLIS — South Rowan’s Bo Corriher grabbed a bat and walked to the on-deck circle, but then he retreated to the dugout and removed his helmet.
Someone had realized there was no way Corriher would get to swing. With the bases loaded, two outs and a tie score in the bottom of the eighth, either Tyler Rary was going to win the game for South or the Raiders and Lake Norman were going to go to the ninth inning.
As tournament MVP Tyler Shepherd edged away from third base, carrying the winning run, Rary took a vicious swing at a 3-1 pitch and pulled it foul.
“It was a strike and I liked what I saw,” Rary said.
South was aggressive like that all night, and Rary also hacked at the 3-2 pitch. He stroked a right-side bouncer to a perfect spot, halfway between the first and second basemen. Rary can fly, and there was no way for anyone to throw him out. Shepherd crossed the plate and the Raiders celebrated an 11-10 victory against Lake Norman in the championship game of the F&M Bank High School Classic.
It was intense, exciting and draining. It felt like run-and-gun basketball. The Raiders led 9-5, trailed 10-9, tied it when they were down to their last strike, and finally won it.
“Games like that when everyone on the team is in to it, I just love it,” Rary said. “Just a great team win.”
Tyler Belk, who is sixth on South’s pitching depth chart was out there on the mound at the end, but he got the job done.
Lake Norman (10-3) has a talented team, loaded with lethal-looking lefties with power and speed. And they threw serious high school velocity at the Raiders (9-4), who have won their last five games.
“We saw good arms, but we’re starting to swing it more like I thought we could swing it when the season started,” winning coach Thad Chrismon said. “It was just a great game, with both teams competing very hard. Lots of energy. Lots of ebbs and flows. We kept battling all night, and I couldn’t be prouder of my team.”
Lake Norman crushed two first-inning triples against South starter Walker Joyce, and only a tumbling catch in deep center by Rary allowed Joyce to escape the inning with two runs.
Rary’s double, a run-scoring single by all-tournament Bo Corriher and a balk got those two runs back immediately.
South went up 6-2 in the third against Lake Norman starter Austin George. There was a parade of singles in front of a two-run triple by Shepherd and a run-scoring single by Shaggy Wyatt.
Shepherd had an amazing tournament, hitting for the cycle on Wednesday and delivering the go-ahead hit in the eighth inning on Thursday. Then he came through one more time against the Wildcats.
“I was glad I could get another big hit to help the team,” Shepherd said.
Lake Norman cut South’s lead to 6-4 in the fourth. That was the last inning for Joyce.
In the bottom of the fourth, Peyton Penninger, who had made a great play to start an inning-ending double play in the third, made it 7-4 with a single through a drawn-in infield.
Sidearmer Austin Chrismon pitched the fifth and South was fortunate to escape with a 7-5 lead. Shortstop Penninger, Austin Hyde, who had replaced Chrismon at second, and first baseman Blake Johnson produced a huge double play, with Johnson scooping a throw out of the dirt.
RBIs by Dawson Larrimore and Rary bumped the Raiders’ lead to 9-5 in the home fifth.
But South’s bullpen faltered in the sixth. Wyatt, South’s catcher, threw out a runner trying to steal, but next came a flurry of free passes from Chrismon and Shepherd. Belk got the Raiders out of that disastrous frame, but not before Lake Norman had scored five to take a 10-9 lead.
“We just lost the strike zone for an inning,” Coach Chrismon said.
In the bottom of the seventh, South was on the brink of defeat. After two fly outs, one of them a long one to right by Wyatt, Rary reached on an error. Corriher was hit by a pitch. Then Rary stole third. With Johnson at the plate and down to his last strike, reliever Jared Stukbauer uncorked a wild pitch, and Rary dashed home with the tying run. Stukbauer got the third out to strand two, and the game went to extra innings.
Belk, who had put up a zero in the top of the seventh, returned to the mound for the eighth. The Raiders didn’t have a lot of options after an extra-inning game on Thursday.
“I haven’t had that many opportunities to pitch,” Belk said. “I tried to make the most of it. I’d never been in a situation like that, but Shaggy was helping me and the team was behind me.”
Lake Norman put two men on with one out in the top of the eighth, but Belk pitched out of it with a strikeout and routine fly ball.
The bottom of the eighth was a blur of tense at-bats. With one out, Shepherd was struck in the arm by a pitch and Dillon Norton walked. With two out, Larrimore walked.
Rary was next. South fans will remember his last swing for a while.
“It’s a great win for us against a team that can really hit,” Rary said.
South fans kept clapping and snapping photos long after it was over. It was a tough school year during football and basketball, but the baseball team is making people smile again.
South plays well in this tournament. The Raiders are 11-1 in their last four F&M Bank Classics.
“This tournament is important because it’s a momentum-builder for our conference,” Coach Chrismon said. “Battling to win a competitive game like this, it’s exactly what we needed.”