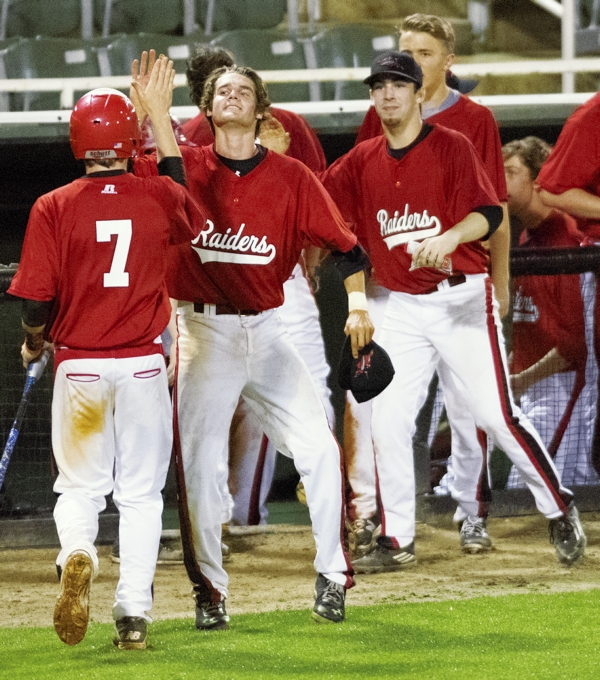 So did a couple of big swings.

The Raiders spent seven innings playing small-ball against Northwest Cabarrus, massaging one run — then a second, then a third — across the plate. In the eighth inning, they received clutch hits from Tyler Shepherd and Blake Johnson and surged to a 7-3 victory.

“Our team motto is ‘Finish,'” Johnson said at Intimidators Stadium, where South (9-4) earned a berth in tonight’s championship game against Lake Norman, weather permitting. “When they scored three runs to tie it up, we knew we weren’t finished.”

Johnson and Shepherd each delivered two-out, two-run hits against Northwest reliever Blake Sinclair in the final inning. With the score knotted and the bases loaded, Shepherd lined a 1-2 pitch into left field that plated teammates Austin Corriher and Walker Joyce. Two pitches later, Johnson barbecued an 0-1 fastball into the right-center gap for a two-run triple.

“We’re just trying to play good baseball,” coach Thad Chrismon said after South won its fourth straight game. “Trying to take good at-bats, trying to be confident at the plate and really concentrating on driving in runs. It’s all about getting key hits. It took us a little while to get going tonight, but we came through in the end.”

The beneficiary was Corriher. A senior right-hander, he allowed one earned run and struck out four in three innings of nerve-wracking relief. Northwest (4-8) put four runners on base in the last of the sixth inning, one in the seventh and two more in the eighth before infielder Cal Hubbard struck out to end the game.

“I settled in pretty well,” Corriher said after notching his first win. “I was just trying to finish what we started. It felt good to know to know you did your job.”

South opened the scoring in the top of the first against Northwest starter Carson Bost. Leadoff batter Dawson Larrimore drilled a triple to gap in right-center and quickly scored on a wild pitch. In the Raiders’ fourth, Peyton Penninger steered a single into right, Shepherd reached on an error and pinch-hitter Colsen Childers drew a walk, loading the bases with one away. Bost’s second wild pitch of the night made it 2-0 and Larrimore’s sacrifice fly gave South a three-run lead.

Meanwhile, South starter Dillon Norton, a junior lefty, pitched three innings of scoreless ball. He allowed one hit and walked four before yielding to middle reliever Austin Chrismon, who surrendered Northwest’s first run on a fifth-inning groundout. Corriher entered in the sixth and allowed two runs, one when he hit Jamie Baker with an eratic, bases-loaded pitch and another on a Cal Hubbard’s groundout.

“When (Corriher) first came in he was messing up a little bit,” Coach Chrismon said. “Then he got a feel and his second and third innings I thought were really good. He kept us going.”

He kept them going until Shepherd and Johnson helped South secure the victory. “Shep got the big hit,” Johnson said with a post-game smile. “He took all the pressure off me. I just went up there trying to help the team.”

Tonight’s final against Lake Norman (10-2) is scheduled to start at 6:30 p.m. “I don’t even know who we’re playing,” Johnson said. “We’re just going to approach it like any other game, play-by-play and pitch-by-pitch.”

Lake Norman as won nine of their last 10 games, including Thursday’s 10-0, five-inning rout of Parkwood.