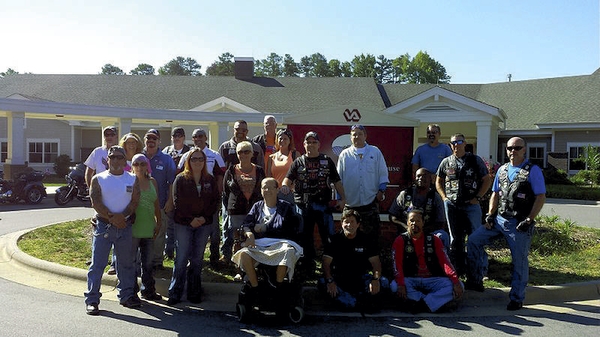 Submitted photo Peter, a veteran who stayed at the VA Hospice House, sits in a wheelchair posing with bikers and hospice workers after they sent a Mickey Mouse doll to ride on a motorcycle in his place during one of the Biker Blues BBQ Rally and BBQ Classic events. This year's event will take place this year on Sept. 16 and 17. Proceeds from the poker run will go to the VA Hospice House.

Donna Montgomery, Red Cross Deputy Representative for the No Veteran Dies Alone program, said when veterans get around motorcycles, something in them lights up.

“That’s when they stop being patients and start being men again,” she said.

“You can see the tears in their eyes,” Mike Hibler, another volunteer at the hospice, said.

Tilley Harley-Davidson will be hosting its sixth annual Biker Blues & BBQ Rally and BBQ Classic on Sept. 16 and 17. They will be donating proceeds from the event to the VA Hospice House.

The event is free to the general public. It is sanctioned by the Kansas City BBQ Society and a North Carolina Championship.

Last year’s event was one of the largest team participation events in North and South Carolina, with more than 65 teams, many nationally known, attending from across North Carolina and various states. An estimated 3,500 people attended the two-day event.

The event is recognized as a premier Kansas City Barbecue Society event. Professional barbecue-cooking teams will compete for the chance at becoming the grand champion. Barbecue judges certified by the Kansas City Barbecue Society will be judging the contest. The event is an American Royal qualifier, so every year the grand champion has been invited to participate in the American Royal World Series of Barbecue.

There will be a charity poker run, a people’s choice barbecue tasting, along with different vendors and food. Country singer Darrell Harwood will be Friday night’s entertainment, and the dance band the Delmonicos will be performing on Saturday.

Since starting the event in 2011, Tilley Harley-Davidson has donated more than $10,000 to selected charities.

This year, event coordinator Gary Moss said the most important thing is supporting the veterans. He said a lot of people who ride motorcycles at the store are also veterans, and he is a veteran himself.

“We believe in the veterans and the military,” he said.

“You can see them change,” she said.

One veteran named Peter even wanted to ride a motorcycle in the poker run during one BBQ Rally. Since he was not healthy enough to get on a bike, they sent a Mickey Mouse doll to ride on the back of a bike for him.

The event is not just for veterans and bikers. Moss said they work hard to make it a family event. Anyone can come and enjoy the barbecue-tasting, and attendees do not have to ride a motorcycle to participate in the poker run.

Moss said all of the proceeds from the poker run will go to the hospice.

Hibler said the veterans get excited about the event weeks beforehand.

“Once we tell them about it, they keep asking when it’s going to be,” he said.

Montgomery said the participants cooking the barbecue know that the proceeds are going towards a good cause. Some past winners have even given their prize winnings back to the veterans.

Hibler and Montgomery said the store has gone above and beyond to support local veterans, from delivering barbecue to veterans who could not attend the event to supplying the veterans with Tilley Harley-Davidson hats and T-shirts. Hibler, who is also a veteran, said he knows if he needs something for the veterans, he can always find help with Moss at the store.

Proceeds from the event and other donations from the store go towards things like social events, kitchenware, clothing and grief books for families. Hibler said whether big or small, all of the donations help enhance the veterans’ quality of life.

“I know I work, and so does Donna, just to see (the veterans) smile,” he said.

The No Veterans Die Alone program provides support to veterans while they are in hospice. The support includes reading to the veterans, holding veterans’ hands and talking with them when they are close to death and making them as comfortable as possible while in hospice.

Tilley Harley-Davidson also participates in Wreaths Across America by placing wreaths on veterans’ graves during the holidays.

“They really do make a difference,” she said.

Moss said as long as he has a say, Tilley Harley-Davidson of Salisbury will continue to support veterans.

“We do support the VA and it’s a worthwhile cause,” he said.