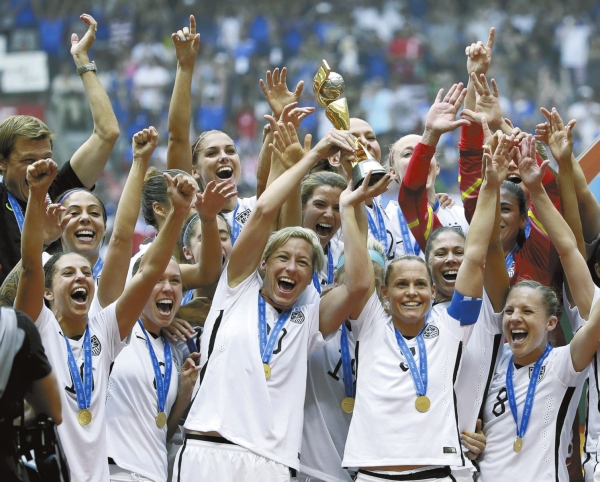 The team saw a surge in popularity following last year’s 5-2 World Cup victory over Japan, and the group generated more revenue than the men’s team. The U.S. women have won three total World Cup titles and four Olympic gold medals, while the men have not won either event.

But the issue over equitable pay is more complicated than it appears.

The players and their union are currently embroiled in a legal dispute with U.S. Soccer over the status of their collective bargaining agreement. The federation filed a lawsuit earlier this year seeking to clarify that its contract with the U.S. Women’s National Soccer Team Players Association runs through the Rio Olympics until Dec. 31. The union maintains the memorandum of understanding from March 2013 can be terminated at any time. That case is pending.

Here are the answers to some of the questions surrounding the issue:

DOES THE WOMEN’S TEAM GENERATE MORE REVENUE THAN THE MEN?

U.S. Soccer released financial details at its last general meeting that projects the women will generate $17.6 million in the 2017 fiscal year, while the men bring in an estimated $9 million. The women’s team has already qualified for the Rio Olympics; the men’s team failed to qualify. For the 2016 fiscal year, the national teams were expected to operate at a deficit of $420,929 but instead generated revenues of $17.7 million, thanks in part to the women’s World Cup victory and subsequent tour. The women were far more visible because it was a World Cup year for them.

The Women’s World Cup prize money for the women’s team was $2 million distributed among the players. In contrast, the Germany’s men’s team won $35 million from the 2014 World Cup. The U.S. men’s team earned $9 million for their appearance in the tournament. The men were knocked out in the round of 16.

As far as U.S. Soccer is concerned, USWNT players are paid $30,000 for making the World Cup team, while the men are paid $68,750 apiece, according to documents in the EEOC complaint.

The men’s team gets a $2.5 million bonus for making the World Cup field, while the women don’t get a bonus.

WHAT ARE THE DIFFERENCES IN SALARY BETWEEN THE MEN’S AND WOMEN’S TEAMS?

The top players on the women’s team are paid a salary of about $72,000 a year by U.S. Soccer, along with bonuses, to play in a minimum of 20 exhibitions per year. They are awarded bonuses if they win those games, with the potential to earn $99,000, the complaint said.

USMNT players are also required to play at least 20 exhibitions a year, earning a minimum of $5,000 for each appearance. Compensation varies with the level of opponent, based on FIFA ranking. Players can earn up to $263,320 if they win all of their games, according to the EEOC complaint.

The male players are typically offered greater compensation as incentive to appear in the exhibition games, one attorney explained, because many have demanding schedules with their club teams.

Members of the USWNT are allocated across the National Women’s Soccer League, and U.S. Soccer pays their club salaries.

Also, the payouts are based on terms in the collective bargaining agreements.

WHAT ABOUT TELEVISION REVENUE?

In terms of ratings, the women’s 5-2 victory over Japan in Canada last July was seen by 26.7 million viewers on Fox and NBC’s Telemundo network — making it the most-viewed soccer game in the history of American television.

That topped the previous American record of 26.5 million set when Germany beat Argentina in the 2014 men’s World Cup final. That was seen by 17.3 million on ABC and 9.2 million on Spanish-language Univision.