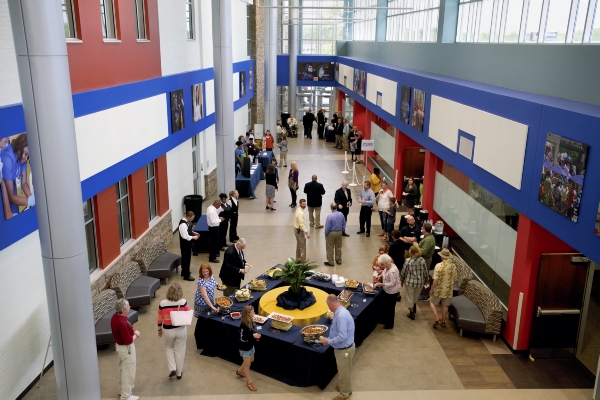 SALISBURY — Classes may have been going on in Rowan-Cabarrus Community College’s new and improved health and sciences building since January, but with a snick of scissors Thursday afternoon, the space was declared officially open.

The renovations were funded by the 2010 Rowan County Bond Referendum and buoyed with a $2 million boost from a U.S. Department of Commerce Economic Development Administration grant. The funding allowed the school to add an extra 30,000 square feet in addition to upfitting classrooms and labs with new technology. RCCC President Dr. Carol Spalding said that the bond funded 12 new classrooms and four labs.

At the grand opening Thursday evening, Board of Trustees Chair Carl Short said he was pleased with the “new welcoming” the building provided to Salisbury for travelers driving up Interstate 85.

“I think we all agree it’s an improvement,” he said.

But it’s the students and the promise of a continued dedication to economic development in the county that are the real focus, school officials said.

“The reopening of this building is our commitment to economic development,” Spalding said.

President of Rowan County Chamber of Commerce Elaine Spalding and Executive Director of Rowan Works Robert Van Geons said the college has always been an asset to industry and the local business community. Van Geons said the new building “showcases all the great things the community college is doing,”

But Short said the building is all about the students.

“This is not for the Board of Trustees, or anyone other than the students at our college,” Short said.

And so far, it’s been well received.

“We love it. We think it embodies the student experience,” Student Activities Coordinator Shemeda Coats said.

The walls of the bright atrium are lined with photos that walk through students’ journeys — from registration at the navigation section to graduation.

Robles had classes in the building while it was being renovated, putting her cheek-by-jowl with construction crews, but said it wasn’t so bad.

“It was OK except when drilling was going on,” she said.

But she loves the new addition — it’s bright and inviting, and she hopes it leaves a positive impression with new students.

“I just hope that it makes students come back,” she said.