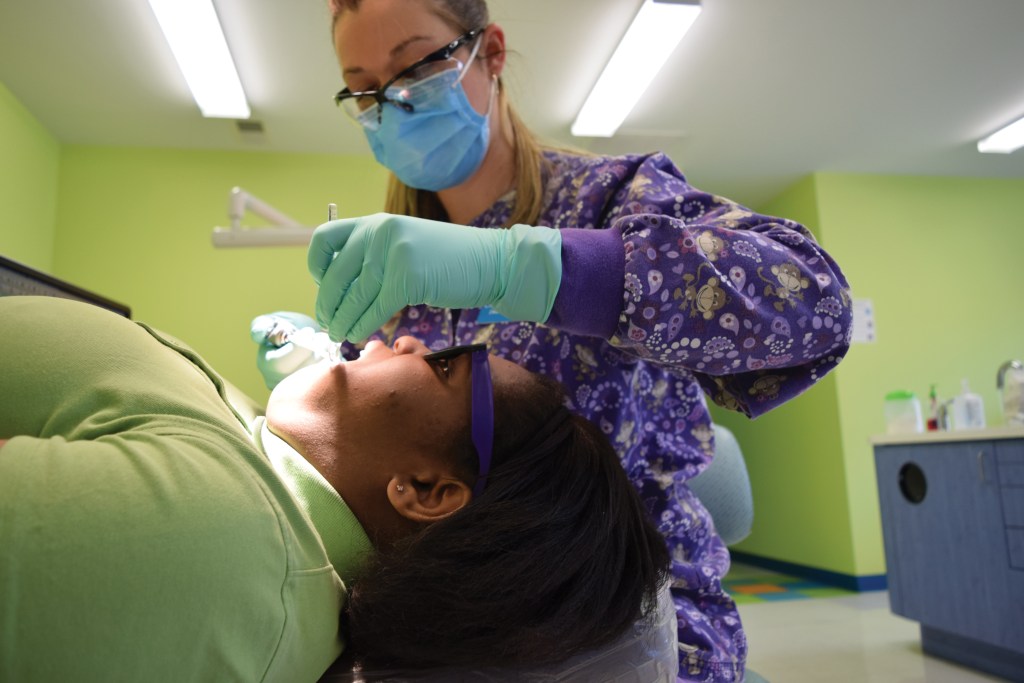 Casey Webb, a Dental Assistant, applies sealant to Destiny Davis's premolars. Davis already has sealants on her molars, but the "Give Kids a Smile" campaign gives her a chance for extra protection -- premolar sealants are often not covered by insurance. Rebecca Rider/Salisbury Post

Elementary school student Katelyn Nottingham lays back in a gray chair and waits for the dentist. It’s her first visit, and she’s nervous. The bright back room at Salisbury Pediatric Dentistry is crowded with other students from her school, and it’s a few minutes before Dr. David Thome makes his way down the aisle to Nottingham’s chair.

The two chat for a minute and Thome checks Nottingham’s teeth, looking for signs of decay. If he finds none, Nottingham will be getting sealants today – but even if she doesn’t qualify, Thome and Debbye Krueger, public health dental hygienist with the Department of Health and Human Services, hope she’ll gain something else: a good first impression.

“She won’t get sealants today, but she had a good visit,” Krueger said.

Over the past few months, students from Rowan-Salisbury Schools have been slowly filing through the office at Salisbury Pediatric Dentists to receive sealants – a clear plastic that fills grooves in molars and protects against tooth decay.

“It’s so much easier to prevent it than treat it,” Krueger said.

In 2004, Krueger examined Rowan County fifth-graders and found that 17 to 20 percent of them had tooth decay – higher than the state average. She began pushing for sealants and other preventative measures, and said that by 2006, the number had dropped to hover between zero and 2 percent.

If a child can get to 18 without much decay, Krueger said, they’re more likely to continue to take good care of their teeth as they age.

Last school year, Krueger and the school system began partnering with Salisbury Pediatric Dentistry in a program called “Give Kids a Smile” to provide sealants to third- through fifth-graders – free of charge. Salisbury Pediatric Dentistry volunteered to host nine sealant workshops. All the school system had to do was identify the kids and get permission.

Krueger and school nurses identified kids who were most at risk for decay, or who had never been to a dentist before. Getting a sealant isn’t invasive or painful, Krueger said, so it’s a perfect first trip.

“With sealants there’s no shots, there’s no drills, it’s literally just like painting your nails,” she said.

While Salisbury Pediatric Dentistry offered to see up to 80 children each workshop, Krueger said they’re not always able to fill every spot. On the March 23 visit, there were only 30 students from Cleveland and Woodleaf elementaries.

“But we could have seen 80 children,” Krueger said.

During Cleveland and Woodleaf’s visit, the front waiting room is full of students, jittery and talkative. Once they get to the back room, they quiet down. But even children who have been to the dentist before are enjoying themselves. Zevion Cuthrell, a student from Cleveland, said he’s been to the dentist “millions of times,” but he’d learned a lot of new things.

“It was actually kind of fun,” he said.

The materials and man-hours donated for the workshops equals about $30,000, Thome estimates. He, and his office, chose to donate the time because “it’s needed” and is a part of their responsibility to the community.

“We’re part of the community, and this is a big service,” he said.

Krueger said that the sealant workshops had seen about 200 Rowan-Salisbury students so far, but they could have served more than 700.

In addition to the two “Give Kids a Smile” workshops left for select elementary schools, Krueger said that free dental clinics and a sliding fee scale at the health department means that every child has the opportunity for a healthy smile.

“There’s no reason in Rowan County for any child to not go to the dentist,” Krueger said.

Overcooked food the cause of Grants Creek Road mobile…