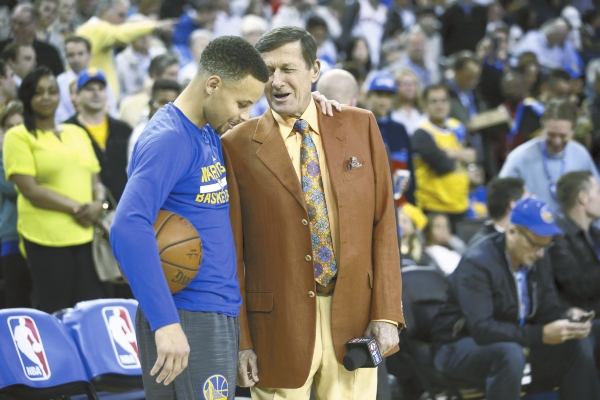 AP Photo/Marcio Jose Sanchez... Broadcaster Craig Sager, right, talks to Stephen Curry before Tuesday night’s NBA game against the Washington Wizards in Oakland, Calif. Sager’s spirits are undeterred by the latest challenge in his cancer fight, even if it meant a red-eye flight after Wizards-Warriors game, to get to a doctor’s appointment in Houston on Wednesday morning, before another game Thursday.

OAKLAND, Calif. (AP) — Craig Sager has a blood clot behind his right ear that is affecting his hearing, and that’s just another annoyance he is accepting as he continues to work NBA games for Turner Sports with fervor despite his leukemia no longer being in remission.

Dealing with the clot, which Sager compared to swimmer’s ear that won’t subside, could cause him to bleed to death given his blood levels, he said.

Sager’s spirits are undeterred by the latest challenge in his cancer fight, even if it meant a redeye flight after Tuesday’s Wizards-Warriors game to get to a doctor’s appointment in Houston on Wednesday morning before another game Thursday. His new reality includes twice-weekly blood work and regular transfusions, the latest done Monday in Atlanta before he flew West.

“Nice to be here, that’s for sure,” said Sager, who stood up and saluted Steve Kerr as the Warriors coach discussed the one-of-a-kind broadcaster before the game. “I always get here over three hours before tip. It’s fun.”

Sager waved when he received a standing ovation and cheers from one large section of Oracle Arena as he walked along the baseline during a fourth-quarter timeout.

For the occasion of covering the defending NBA champions, Sager purchased a new outfit — wearing a “Golden Gate Bridge” orange sport coat and shirt with a bright tie that lists its 15 colors on the back. His special Nike sneakers say “Mr. Fancy” inside the tongue of the left shoe and “Suits” on the right one.

“Excited to see him,” Kerr said. “Thinking a lot about Sager and his family, and there he is. … Fired up you’re working the game, Sags.”

Oh, and for anyone wondering how he’s holding up emotionally, Sager said defiantly: “I think my demise has been prematurely reported. I think I’m going to kick this and make medical history and I really believe that.”

The 64-year-old is set to work Thursday in Houston, where he receives his chemotherapy treatments — eight days of chemo coming soon starting the final week of the regular season and into the first week of the playoffs.

“I got a bag of platelets and a blood transfusion. It kind of pumped me up, got me going,” Sager said of Monday’s trip to the hospital. “It’s like having an old car. You’ve got to put gas in it. If it’s leaking oil, you’ve got to put oil in it every day, too.”

If all goes well during Wednesday’s checkup, Sager figures he won’t have to go back until Friday for more blood work.

“Obviously not good but it’s keeping me going. I have no choice,” he said.

Sager said there’s “no doubt about it” that he’ll work through the playoffs. He hopes to be assigned to San Antonio in the first round so he can go back and forth to Houston.

“He’s a battler. He’s going to fight this tooth and nail, that’s who he is and that’s who he’s got to stay,” said Wizards coach Randy Wittman, who as a player in Atlanta met Sager and later had a business with him.

Sager also is taking on some duties as a spokesman for leukemia awareness. Whatever he can do to help in a cause that needs more attention, he said.

Afterward in their postgame interview, Curry said: “Seeing you and doing what you’re doing, we’ve got no excuses. You’re an inspiration for us to keep doing what we’re doing, keep fighting.”

“It’s obviously been very surprising and overwhelming the support I’ve gotten,” Sager said. “So many times when you’re doing a job you feel like you’re nuisance sometimes to people and you’re intruding on their space and you’re asking questions maybe they don’t want to deal with at the time and it’s not as, ‘Hey, welcome, here’s Craig.’ Whereas now it’s kind of been different. I’ve always been one I’ve always liked to talk to people in the stands. I understand when people come up to me and say somebody in their family has cancer, ‘We appreciate what you’re doing, we appreciate your fight, don’t give up, we love your attitude.’ That’s just me. I’ve never had one day where I said, ‘Why me?’ and I’ve never had one day where I laid in my bed and thought about what reality and the worst things are and was down and started crying in my bed. That’s never happened.”

He misses his daily runs, especially along the water in San Francisco. His tender feet and energy levels make it difficult. Sager did get some golf in last weekend with his kids, and “took their money, played pretty well, I was very happy. I’m not hitting it as far but I’m still playing pretty good.”

Sager has earned his doctors’ trust over the past two years going through this that he can handle being out, traveling and working on his craft.

“I tell them, ‘No, I’ve got to go,’” he said. “I’d go crazy if I just sat around and tried to make sure I didn’t bleed or get cut. I’ve got to be myself and go do what I have to do that keeps me going. It keeps me motivated. It’s therapeutic.”