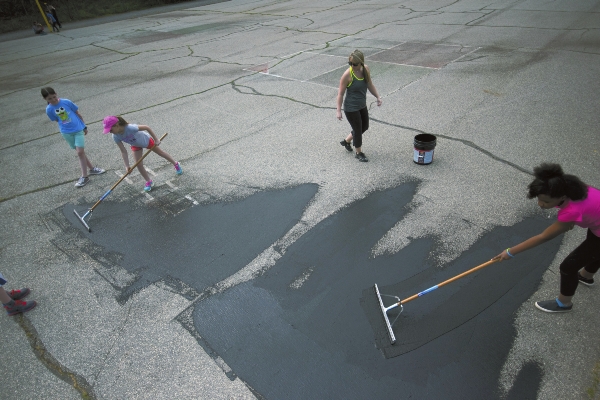 Members of Granite Quarry Elementary School’s Student Government Association made improvements to the school’s basketball courts on Saturday, supervised by Principal Catherine Hinson and fifth-grade teacher Sarah Furr. Along with resurfacing the court, the students and adults painted the faded baskebtall goalposts. The Student Government Association spent the last year and a half raising more than $1,500 for the project. Jon C. Lakey/Salisbury Post

GRANITE QUARRY — The first Saturday morning of spring break dawns bright and clear, and instead of heading off to the beach or away for a week of vacation, Granite Quarry Elementary’s Student Government Association (SGA) gathers on the school grounds.

A parent volunteer uses a leaf-blower to push gravel off an old, cracked outdoor basketball court, while the students grab brooms and begin sweeping around the base of the faded goalposts. Principal Catherine Hinson surveys the work.

“Our track has overflowed onto the blacktop,” she said.

The group is hard at work to restore the court to its old glory.

“It was getting worn out and had a lot of cracks and stuff,” fifth-grader Icesis Nwafor said.

Two of the basketball goals don’t have rims and have broken backboards. The others are missing nets. Grass and weeds grow in the cracks that spiderweb across the court.

Last year, fifth grade teacher and SGA supervisor Sarah Furr said, the students chose a school improvement project: they decided on the basketball court. Over the last year and a half the association raised more than $1,500 through in-school fundraisers to repair the blacktop and basketball goals.

Saturday, they finally got to see their work come to fruition.

“They’re excited,” Hinson said,” They’ve been out here since about 8:45 this morning.”

The kids spent the morning pulling weeds and grass, sweeping away gravel and repainting goalposts a vibrant yellow.

“It’s hard work, but it will be worth it,” fifth-grader Teagan Johnson said.

The group pulled out four buckets of blacktop sealant and set to work. Hinson stirred the black goop with a broom handle until it was pourable, and then the kids grabbed squeegees and began spreading it around.

While Hinson said they’d probably have to get more sealant to finish the court, when it’s done the students with the group will stencil games on the blacktop. Furr said they hope to put at least 20 different games on the court’s new face. New rims and backboards are being donated, but the SGA doesn’t plan to stop at the court.

Hinson hopes to repaint old playground equipment, and the school is in the process of installing a new walking track. Hinson hopes to put in a permanent kickball field and a swing set, as well.

“The more options you give them, the more likely they are to participate,” Hinson said.

Furr said the SGA wanted to tackle the entire improvement project, but they dialed it back and chose to focus on the basketball court.

Nwafor and the association’s other fifth-graders will be leaving at the end of the year, but Nwafor said they’re still excited about the changes.

“We’re going to try and enjoy it as long as we can,” Nwafor said.