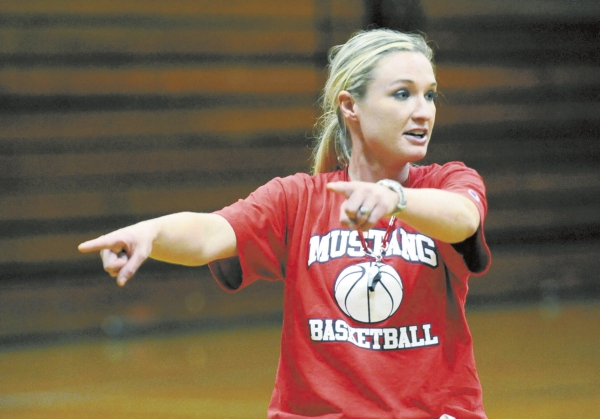 Wayne Hinshaw file photo/for the Salisbury Post ... In a file photo, East Rowan coach Danielle Porter explains a drill in practice to one of her East Rowan girls basketball teams. Porter, who also played at East, has stepped down as the Mustangs’ coach.

GRANITE QUARRY — Danielle Porter has stepped down as East Rowan’s girls basketball coach after six seasons.
She still loves to hear the ball bounce on the hardwood, still loves to teach the game, still loves to watch her players grow as people, but she’s at a crossroads, and she’s had to make tough decisions.
Porter has a husband (Derek) and a 3-year-old. Those are two pretty good reasons for a 35-year-old gym rat to call a timeout and take a break.
“This has been in the making for a while,” Porter said. “We’ve got a business that’s doubled and I’ve got my family life, and then there’s basketball. It’s hard to give all three priorities my all. Basketball takes enormous time commitment. It’s not so much the in-season time that’s tough, it’s that offseason time. If you’re going to have a chance to compete, you’ve got to work in the offseason.”
Wins and losses are only a small part of the impact a coach has on athletes, schools and communities, but when the coach of a high-profile sport steps down, wins and losses are always where you start.
The numbers say Porter was a successful coach. Her teams were 86-64. Her teams were 52-34 in conference games. They were 34-27 in county games, and there are no county games that are easy.
She directed the Mustangs to championships. There are banners in the gym from her tenure.
The 2013-14 Mustangs won the South Piedmont Conference regular season and the postseason tournament, a double-play East’s girls hadn’t turned since 1999.
The 2014-15 Mustangs won the Sam Moir Christmas Classic, something East hadn’t done since 2001, and those Mustangs also won twice in the playoffs, something the program hadn’t managed since 2004.
“We made a little mark in the history book,” Porter said. “We had great girls, and it was my pleasure to coach them. I would’t trade the memories I have and the relationships we had for the whole world.”
Porter played for coach Gina Talbert at East in the late 1990s, and one of Porter’s proudest moments was winning the 2014 Moir Classic at Catawba with Talbert in attendance. Talbert passed away last August.
Porter’s first season as head coach was 2010-11. East was coming off a 5-18 campaign, and there was a lot of work to do.
Karleigh Wike, now at the University of Richmond, was a varsity freshman in Porter’s debut season, and better days were ahead. As a sophomore, the 6-foot-4 Wike was joined by another tall post presence, Kelli Fisher, who plays now at UNC Asheville.
East was 16-31 in Porter’s first two years, but next came a 15-11 breakout season.
Then East enjoyed two huge seasons — 22-4 in 2013-14 when Wike was a senior and Fisher was a junior, and then another 22-4 in 2014-15.
Wike wasn’t around for that second 22-4, but Fisher provided automatic double-doubles and she was surrounded by a strong supporting cast — Shenell and Shenique Pharr, Jocelyn Lowe, Amani Ajayi and Kaleigh Troutman.
East’s 44-8 mark in back-to-back seasons ranks among the best runs in program history. East was 45-9 in 1980-81 and 1981-82. East was 46-8 in 1974-75 and 1975-76. Those teams were coached by Hall of Famer Jesse Watson.
Porter’s coaching days will always be associated with the Twin Towers, Wike and Fisher. Porter gives assistant coach Amanda Paffrath, a star at Pfeiffer in her playing days, credit for their steady development.
“Amanda was fiercely loyal, and she was my rock,” Porter said. “She is so knowledgable about the game and you could see her efforts in some pretty dominating post players.”
Besides Paffrath, Porter benefited from frequent assists from athletic directors Chad Mitchell and Laurie Wyrick.
“East is fortunate to have them,” Porter said.
Porter also praised Kelly Sparger, East’s principal when she was given a chance to be a head coach while still in her 20s.
“He provided a stellar example of leadership and support,” Porter said.
As Porter steps down, she offered some thoughts on coaches and the school system.
“I would be remiss if I didn’t use this platform to encourage people with loved ones in the public school system to advocate for a change in the way teachers and coaches are being managed,” Porter said. “There is a mass exodus of both, and if we don’t stand up for them, I’m afraid for the climate of education in 10 years. I have close family and friends in the system. It’s disheartening to see the challenges they are faced with on a number of levels.”
A mini-era ends at East with this season’s 12-14 record that included five close SPC losses.
Five of Porter’s top seven were seniors, so the next coach will face a rebuilding job.
Freshman Lauren Weisensel will be the lone returning starter.