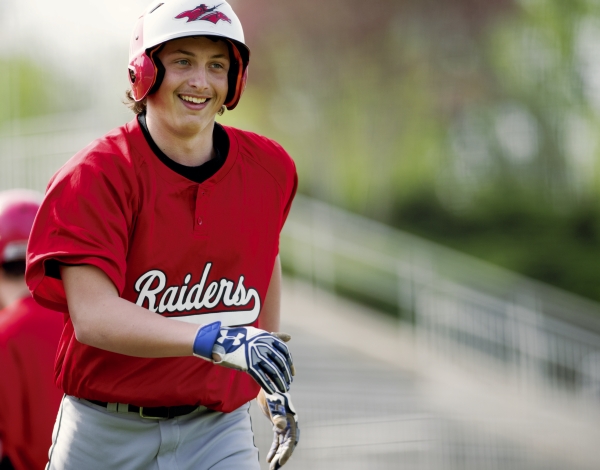 ALLISON LEE ISLEY/SALISBURY POST ... South Rowan’s Tyler Shepherd heads back to the dugout after hitting a home run during the second inning of Wednesday’s game against Salisbury. Shepherd went on to add a single, double and triple, completing the first cycle for South since 2009. South won the game, 22-4.

KANNAPOLIS — Lots of crazy things happened in South Rowan’s 22-4 win against Salisbury in the F&M Bank High School Baseball Classic, but the craziest was South third baseman Tyler Shepherd hitting for the cycle.
Cycles are rare. Cycles in five-inning games are as weird as aliens landing.
“I saw pitches to hit and I put good swings on them,” Shepherd said. “First cycle of my life.”
Shepherd blasted a two-run homer in the second inning to get his day at Intimidators Stadium off to a promising start.
He got to hit again later in the same inning because South sent 14 batters to the plate and put up 10 runs against the defending tournament champs. Shepherd took advantage, producing the run-scoring single that made it 8-0.
Things had gotten out of hand by the time Shepherd doubled home a run in the third inning.
He walked in the fourth.
Then Shepherd got to swing again in the top of the fifth. When he stroked a liner toward the gap, he was well aware that a triple would give him the cycle, and he went for it.
“I wasn’t stopping until I got to third,” said Shepherd, who produced five RBIs.
He made it safely.
Josh Feldman, Intimidators stats guru, said Shepherd produced the first cycle at the stadium since former East Carolina Pirate Dale Mollenhauer accomplished the feat in 2008 for the Intimidators. Mollenhauer completed the cycle, oddly enough, with a single in the eighth inning.
Chrismon couldn’t recall a cycle by a South Rowan player since Maverick Miles achieved the feat at North Rowan in the 2009 season opener.
“The triple is usually the tough part of a cycle, but in this ballpark, the toughest thing is the home run,” South Rowan coach Thad Chrismon said. “If you hit it between the outfielders or over the outfielders here — and you can run a little bit — you’ll get triples.”
South got a two-out triple in the first inning from Austin “Bo” Corriher, and he jogged home when winning pitcher Blake Johnson hammered a double.
South (8-4) also got a two-run triple from Dawson Larrimore in that 10-run second. Austin Chrismon whacked a run-scoring double.
Besides all those extra-base hits, the Raiders piled up 12 singles for a 19-hit attack.
“I can’t really say we played bad because our hitters squared up quite a few balls and we didn’t make an error,” Salisbury coach Mike Herndon said. “South just hit everything we threw up there, and I commend them for it. They hits some balls hard, and the balls they didn’t hit hard found holes.”
Salisbury’s starting pitcher Harrison Smith had beaten the Raiders, 10-4, on March 9, the Hornets’ first victory against South since 2000. This time Smith was charged with 13 earned runs, while recording six outs.
“He was throwing three different pitches for strikes last time against South and he pitched a great game,” Herndon said. “Today his breaking ball and his change-up weren’t working for him, and you’ve got to have two pitches to compete. They were sitting on fastballs, and his velocity wasn’t as good today as it was the first time.”
All the Raiders downplayed the revenge factor. They said it was just a step to get to the tournament semifinals and a chance to show that they’re ready to shake the scouting reports on them that say they can’t hit.
“I’m sure it helped our focus some that we’d lost to Salisbury earlier, but mostly this was just a chance to show how much work we’ve been putting in on our approaches and swings,” Johnson said. “We got on top in the first and then we jumped on them in the second. It’s nice when you hit as a team, and it’s nice when you play great defense like we did. It was all good.”
Johnson faced the minimum nine batters in the first three innings, and by then, it was 13-0.
While it was a tough day on the mound, Smith swung the bat well and had two hits. Bo Rusher also had two hits for the Hornets (5-5) and drove in runs with a fourth-inning double and a fifth-inning single.
The 22 runs were the most for the Raiders since 2010 when they scored 17 runs in the first inning and pummeled Lexington 28-1 in an Easter tournament game.
“It was good to see us swing it like we did today,” Coach Chrismon said. “Guys have worked extremely hard. We’ve done a pretty good job all year of getting guys on base, but we haven’t been getting them in. Today we did. We were aggressive. We attacked fastballs, and we drove the baseball.”
•••
Today’s schedule includes Salisbury vs. A.L. Brown (5-5) in a consolation bracket game at 1:30 p.m. and South Rowan vs. Northwest Cabarrus (4-7) in a 6:30 p.m. semifinal. NWC beat the Wonders 4-0. … South beat Northwest Cabarrus 2-1 on March 1 in a South Piedmont Conference game. … South shortstop Peyton Penninger always seems to play well in this tournament and had a fine day defensively. … Tyler Belk pitched the fifth inning for South. … Shepherd played at North Rowan last season. … South won this tournament when the current seniors were sophomores.