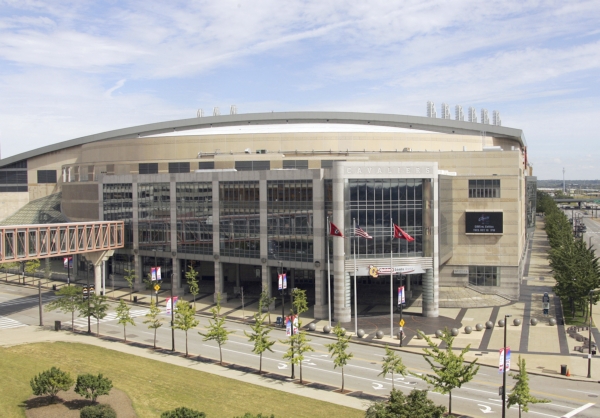 Only Secret Service agents and Cleveland Police will be allowed to carry guns in Quicken Loans Arena during the Republican National Convention. AP photo

So do you think guns should be allowed at the Republican National Convention?

Granted, the question is moot. On Monday, the Secret Service announced that only its agents and Cleveland police will be allowed to bring firearms into Quicken Loans Arena when the GOP assembles there this summer. But “moot” is not the same as irrelevant.

As you may know, the Secret Service put its foot down because of a petition at Change.org demanding that convention goers be allowed to bring weapons to the Grand Old Party. The fact that the arena does not allow weapons, says the petition, is “a direct affront to the Second Amendment and puts all attendees at risk.”

It goes on to say: “As the National Rifle Associationhas made clear, ‘gun-free zones’ … are ‘the worst and most dangerous of all lies.’ The NRA, our leading defender of gun rights, has also correctly pointed out that ‘gun-free zones … tell every insane killer in America … (the) safest place to inflict maximum mayhem with minimum risk.”

The petition adds that because “Cleveland … is consistently ranked as one of the top 10 most dangerous cities in America” and because of “the possibility of an ISIS terror attack on the arena,” convention goers must be allowed to bear arms.

Presumably, at least some of them recognized the petition as a pitch-perfect satire, albeit from a man whose sense of humor is drier than saltines in the Sahara. CBS News has identified the author, who styles himself “the hyperationalist,” as a fellow named Jim — he would give no last name or city of origin — who told the network he’s a liberal Democrat.

But, he said, “I’m 100 percent sincere in my conviction that guns should be allowed at the GOP convention. (It would be a reflection of) the policies they sought to impose around the nation.”

He’s right, of course. The Republican Party has marched in lockstep with the NRA for many years, pushing an agenda of guns everywhere for all people at all times.

So far, the party has declined to answer. Ohio Gov. John Kasich, in whose open-carry state the convention will be held, told reporters he would defer to the Secret Service. Ditto Ted Cruz, who once gleefully ate bacon cooked on the barrel of an AR-15 rifle. Donald Trump said that before he comments, he will need to read “the fine print;” the petition is 799 words long.

The party’s silence magnifies its hypocrisy. If Republicans believe what they say, they should demand the right to cram as many firearms into that 20,000-seat arena as it will hold. This is shaping up as the tensest, angriest, most contentious convention of modern times. By GOP reasoning, it would be safer if handguns, machine guns and the odd bazooka were added to the mix. It should tell you something that no Republican will say that now.

For years, they have promoted their cynical, dangerous policy of pushing guns into every cranny of American life. The rest of us have argued against it with limited success.

But now, along comes Jim, eviscerating both party and policy in a single brilliant stroke and reminding us that when people make foolish arguments, sometimes it’s better not to fight them.

Sometimes, it’s more damning if you just take them at their word.