Wineka column: Shooting hoops — there’s a basket waiting for you 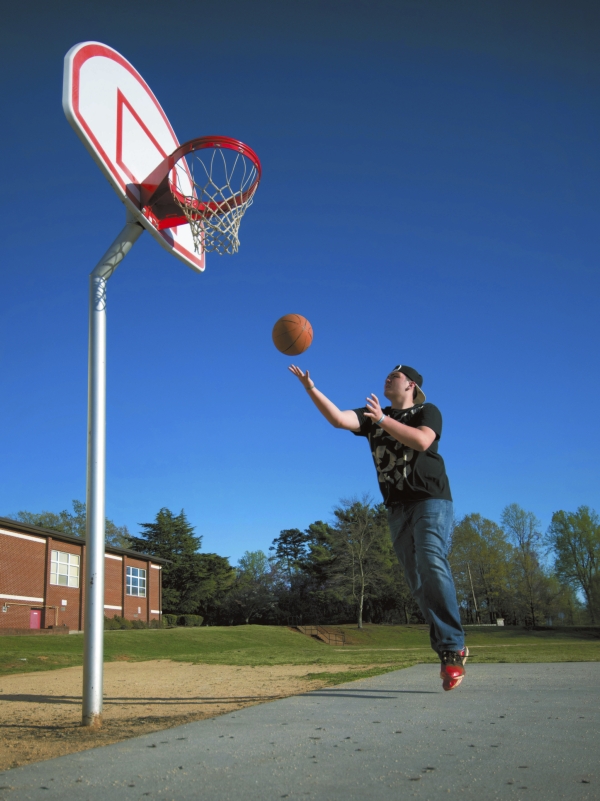 Collin Worley is a basketball fan. When he is not watching the action of the NCAA baskeball tournament, he takes time to shoot some baskets at the Faith Elementary School near his home. Not surprisingly, Worley is pulling for the North Carolina Tarheels as he shoots baskets under the blue skies of Carolina on Monday afternoon. Jon C. Lakey/Salisbury Post

SALISBURY — Everywhere I went Saturday, I seemed to see kids shooting hoops, usually in their driveways, most often in pairs. It even looked as though brothers and sisters were getting into the act — and getting along.

March Madness surely sparks some of this activity. The young players can’t help but imagine competing in front of big crowds and on national television, as they drive the lane and kiss game-winning shots off the backboard.

Shooting baskets can be a highly personal, solitary activity, or a completely social one. It was both for me.

When I decided to be serious about basketball, I had to seek out places to practice. My dad and I played a lot of pitch-and-catch through the years — he was a baseball man — but he wasn’t going to put up a basketball goal, or even think about paving our driveway.

So I would hop onto my bike, and holding a basketball against my side with one arm, I headed off for town looking for any available hoop.

I usually found them in school playgrounds or in the back parking lots of the middle school and high school. The rims often were bent. They might have chain nets — string nets would never last a week — but even the chain netting might be gone.

I cultivated other resources. Bob, a family friend who worked for the telephone company, laid his hands on a telephone pole, attached a backboard and rim to it and installed the goal along the side of his driveway. The basket was straight, but the driveway was on a slight hill, so you had to make allowances for that.

Bob made it clear I could show up anytime and just start shooting — and that’s what I did. Sometimes he would emerge from the house to join me, which was great. We usually let each other shoot until a miss, then it was the other guy’s turn.

After my older brother married, I took advantage of his in-laws, who had a big barn on their property. They installed a backboard in the hayloft for me, and I still think that’s where I learned to shoot, given the hours I would spend there after school or during one summer.

On the way upstairs, I would pet the nose of their horse for good luck and ask him, “Why the long face?”

My basketball never bounced very well in that barn. The wood planks had no recoil to them, but I didn’t care — it helped in not having to chase my misses too far.

Elsewhere, I often would shoot baskets with Frank, a friend of mine, on a hillside court behind the elementary school close to his house. You couldn’t always trust where your ball would bounce, given the bumpy asphalt, but we won many imaginary games on that court, most of which had the Boston Celtics and John Havlicek coming out on top.

By my high school years, I was fortunate to be friends with a family of five boys, all around my age, whose father was a top-level executive for a nearby Caterpillar plant. They lived on a farm and had an indoor swimming pool in the barn. Their dad also built his boys a smooth, full-length basketball court in the field nearby.

Though far removed from town, that basketball court was a beautiful thing, and we played countless hours on it, especially at the basket closest to the house. I wonder if the court is still there, or long churned up and grown over.

Much later in life, when I had my own boys, we put up basketball goals and had great times. The driveway of our current house used to have the stenciled, painted lines of a half court, including a free-throw line and a 3-point line.

We played a lot of games of H-O-R-S-E in that driveway, though I didn’t appreciate the day my oldest son dunked for the first time. By paternal declaration, dunking was not allowed in future H-O-R-S-E games.

In my sappy reminiscing, I probably haven’t made it clear how much I enjoyed the solitude of shooting hoops as a kid, or how I also treasured the times I spent sharing shots with my friends and all the conversations that ensued.

The basketball lines on our driveway have long faded away. The boys are grown and gone, but our basketball goal still stands at the end of the pavement. It’s worn, battered, rusty and neglected.

Mold is growing on the net.

I looked at that basketball goal the other day and thought how stupid I’ve been. Why have I neglected something I enjoy so much?

I’m going to buy a new basketball net and replace the moldy one. I think I know where a pump and needle are, and I can rejuvenate one of the basketballs in the garage.

Then I’m going to mosey out to the driveway and start shooting hoops, maybe for a few minutes, maybe for an hour.

I know this for sure: It will be the best of times.