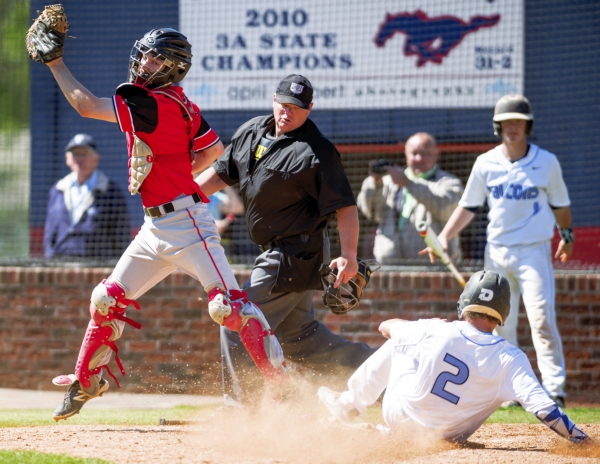 ALLISON LEE ISLEY/SALISBURY POST... West Rowan’s Caleb Link (2) slides across home plate with the go-ahead run in the sixth inning during Tuesday’s game against the Greater Cabarrus Stallions, whose catcher Seth Cauble, left, takes the late throw. Link scored on a hit from Brandon Walton and the Falcons held on for an 8-7 win at Staton Field in Granite Quarry.

GRANITE QUARRY — It was not a thing of beauty, but the two top teams in the East Rowan Easter Baseball Classic squared off Tuesday afternoon at Staton Field —and battled down to the final at-bat.

The West Rowan Falcons used clutch hitting in the late innings by Kacey Otto and Brandon Walton to rally past the Greater Cabarrus Stallions, 8-7, to finish unbeaten in the three-day round robin tournament. Junior right-hander Brett Graham (1-0) made the comeback possible with three innings of scoreless relief against the hard-hitting Stallions.

The Falcons (12-2) battled through an uncharacteristic five errors to claim the win when Walton lined a two run single to right in the bottom of the sixth inning, giving his team its only lead of the game. Otto, a senior outfielder, provided the biggest boost in the comeback with a solo home in the third inning and a bases-loaded three-run double in the fourth that cut the Stallion’s lead to 7-6.

“Coach tells us everyday in practice to never give up no matter the situation,” Otto said after completing a stellar 3-for-5 day with five RBIs. “We didn’t give up and we came back.”

The Stallions (14-3) did their best to reclaim the lead in the top of the seventh against Graham when they loaded the bases with two outs on singles by Noah Jarrett, McConnor Wallace and Seth Cauble. Hot-hitting DH A.J. Knight came up with three hits already to his credit in the game but Graham got him to fly out to center to end the game.

“That is the way our guys have played all year,” Stallions coach Chris Lankford said. “We compete every inning, every out and that was the same thing here today. We battled to the last out, hoping A.J. could find a gap somewhere.”

Graham, who came on in relief of Falcon ace Austin Love in the fifth inning, admitted he was a little nervous when the Stallions loaded the bases in the seventh. “But I knew I had a good defense behind me and I knew if I threw strikes, we could get an out. That was a big win against a really good team.”

In the early going, the Stallions took advantage of West Rowan miscues to build up a 7-3 lead after three and a half innings. Love had trouble settling in as he yielded 6 hits, hit a couple of batters, walked two and uncorked a couple of wild pitches. Four of the Stallion runs were unearned.

The Falcons finally got to Greater Cabarrus starter Cameron Wallace in the bottom of the fourth inning, as Olen Stamper singled, then Mykal Berger and Caleb Link walked to load the bases. Otto stepped in looking for the same kind of pitch he hit over the left field fence an inning earlier.

“I was looking for the same pitch, fastball inside”,  Otto said, “and he (Wallace) threw me just that.” Otto almost had a triple on the drive that bounced off the fence in left center to clear the bases,  but was called out at third on a bang-bang relay from the shortstop.

The winning rally off reliever Tyler Hartsell came in the seventh when the Stallions bobbled a couple of plays at second base to put runners on second and third with one out. Walton made them pay when he punched a liner to right to bring in the tying and go-ahead runs.

“We didn’t play our best but we found a way to get it done,” West coach Seth Graham said. “It was good to see our guys come back like that when they could have just as easily hung their heads and given up.”

The Falcons will be off until next week when they resume South Piedmont Conference play as the league leader. The Stallions head off to Asheboro’s McCray Park for games Thursday and Friday in the Copperhead Classic Tournament.

Stallions star player Hunter Shepherd, a Catawba College commit, said the tournament was was a good experience for his team with wins over Central Cabarrus and East Rowan and the close battle with West. “We played well enough to win most games,” he said, “A few plays here or there and it could have been a different ball game either way. But that’s baseball.”