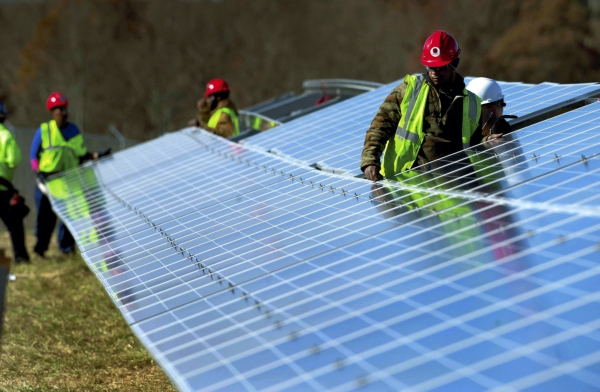 In fields and empty plots of land, they sprout like an invasive species — not native, but thriving in a new environment. These metallic squares only soaked up sun in small numbers previously. Recently, they’ve begun populating space at a rapid pace.

In Rowan County, and across North Carolina, solar energy has rocketed in popularity.

Financially, the largest solar installation in Rowan County sits at Catawba College. The college’s solar array is the largest of any college in North Carolina. In fact, it’s larger than all other North Carolina colleges combined. Catawba’s solar panels aren’t enough to power the entire campus, but are estimated to save 11 percent on electricity costs. The college saves on water with other sustainability methods.

“The whole college has been working toward a goal of becoming a good example for sustainability,” said Dr. John Wear, director of Catawba’s Center for the Environment. “Historically, colleges and university have been the places where more forward thinking needs to occur and has occurred.”

Energy savings for local businesses is even steeper than Catawba in many cases. Sitting near Interstate 85 in Speedway Business Park, Morse Measurements installed 102 panels — enough to cover 90 percent of electricity costs. Founded in 2003, the company focuses on suspension testing, compliance and consulting. Primarily the company tests race vehicles.

On its website, the company accurately states that its testing is powered by the sun. It further touts the solar installation with a live graph on its website compared how much energy is generated with the amount used.

“We felt like it was our responsibility to do something to lessen our impact on the environment,” Morse Measurements President Bob Simons said.

Being environmentally responsible represented a portion of Simons’ reasoning, but tax credits sweetened the idea, according to Simons. With federal and state credits combined, Morse Measurements would receive a 65 percent rebate. Rowan County records show the company paid about $71,000 for its solar installation, which means it stands to receive up to about $46,000 in rebates.

The rebates have attracted many to at least consider solar energy, Wear said. Solar panels, once expensive and clunky, are significantly cheaper and easier to install, according to Wear.

“They’ve gotten cheaper, and  the market is much more competitive, he said. “That’s definitely one reason. Secondly, with the tax credits in place, I think it’s made financial sense for a lot of people who couldn’t have done it otherwise.”

Regardless of the precise reason, Rowan has issued dozens of solar permits in the previous three years, according to county records. Building Inspections Director Thomas O’Kelley said solar panel building permits have grown significantly in number during the previous couple years.

Perhaps the most visible solar installations are large arrays on the side of roadways. Often, they’re placed in rural areas. Some installations are set up on unused farmland. In other instances, the location is simply an empty field. Regardless, solar industry advocates and property owners say the installations leave the earth unharmed for whatever the next use might be. Three examples of solar farms in Rowan County include one just northeast of Gold Hill, another west of Rockwell on N.C. 152 and a third on Mooresville Road near Salisbury. All three pump large amounts of solar energy onto the grid when the sun is shining. When, it’s cloudy the panels still generate electricity, but at a less-than-optimal rate.

Solar farms pump energy onto the grid. As a result, the owners receive a regular paycheck from the power company — usually Duke Energy. It’s only slightly similar to users such as Catawba or Morse Measurements.

Both pump electricity onto the grid. Morse and Catawba don’t directly use energy they generate. They contribute to the overall electrical availability on the grid and receive a check or rebate after generating more electricity than used.

The solar energy boom, however, may be coming to an end.

Rowan’s solar farms and various rooftop installations seem commonplace now, but a Duke University study released this year name solar-friendly policies, set to expire at the end of the year, as the chief reason for the boom. North Carolina ranks fourth nationwide for installed solar capacity. The state is also second behind California in large, utility-scale projects. The solar industry represents $2 billion of direct investment into North Carolina, according to the report.

In the state’s budget, lawmakers decided to let the state tax credits expire, and the federal credit will decrease from 30 percent to 10 percent on Dec. 31. Lawmakers say the solar energy has now become independent, and can function without the credits.

As long as a solar project starts before the end of 2015, homeowners and  businesses can still take advantage of that 35 percent credit.