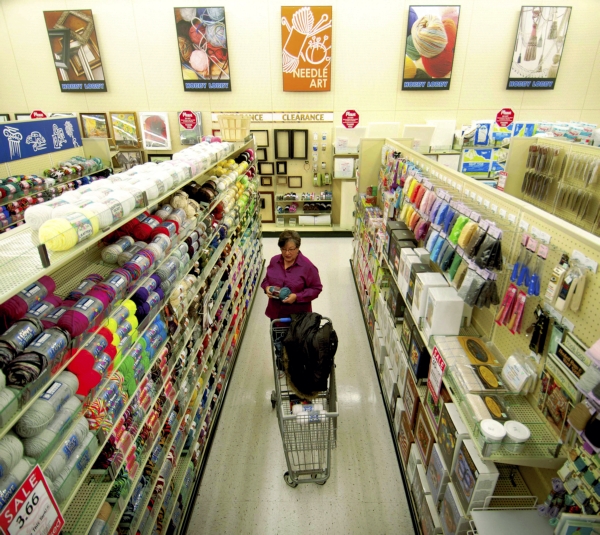 Joan Jackson shops for yarn to complete a baby blanket she was working on. One of the newest large chain stores to set-up a retail store is the Oklahoma based Hobby Lobby store in the Shoppes at Summit center on Julian Road.

Joan Jackson, who just moved to Salisbury, slowly perused the aisles of Hobby Lobby, picking through a colorful wall of yarn. The retired grandmother typed the retailer’s location into her phone and wound up just five minutes down the road at the craft supply store.

Jackson, a longtime knitter, was able to find the “right” colors to begin her next project.

The craft supply store is just one of over a dozen new businesses that have caught the eye of local consumers.

In September, Hobby Lobby opened its store in the Shoppes at Summit Park, making it the first of the retailers in the new shopping center to open.

“We felt that we could bring a very unique shopping experience to the area,” said Vince Parker, a spokesman with the Oklahoma-based arts and craft chain.

He said the company has enjoyed becoming a part of the Rowan County community.
In addition to Hobby Lobby, the shopping center includes Salsarita, Five Below, Kirklands, and Dick’s Sporting Goods.

Mattress Firm moved on its three Salisbury stores into the Shoppes at Summit Park. Just a short drive from downtown Salisbury are two other Mattress Firm locations.

Over the last year, Rowan County, and specifically Salisbury, has seen a growth in retail — from the big-box stores like Hobby Lobby and Harbor Freight to the smaller, locally owned businesses like Your Kitchen Store and More located in downtown Salisbury.

One important factor has been a change in perception about Rowan County, said Robert Van Geons, head of RowanWorks Economic Development.

“Thanks to a proactive city and county leadership, the message that our community is ‘open for business’ is getting the attention of developers, retailers, hotels and restaurants,” Van Geons said.

In the last year, Rowan County has added over a dozen new businesses to its roster. Some of the new businesses have filled a niche market, like New Sarum Brewing Co., located downtown. The microbrewery is one of two emerging microbreweries in Rowan County, while Morgan Ridge Vineyard and Brewhouse is the other.

Your Kitchen Store and More is another downtown business that has been able to fill a need in an area devoid of certain specialized goods and services.

“Retailers and developers recognize that Salisbury and Rowan County is an underserved market. Simply put, our citizens have income they are ready to spend, and if retailers want to ensure they capture it, having a location in our community is the best way,” Van Geons said.

Dennis Lunsford, owner of Your Kitchen Store and More, said he researched the market before opening the downtown establishment. He spent 18 years as a car salesman but longed to be a business owner. He came to the conclusion a kitchen store “was missing from the retail market.”

There were other stores that sold kitchen supplies, but none offered the type of unique pieces and brands he planned to carry, Lunsford said.

“People don’t mind spending their money and are not afraid to spend money,” Lunsford said about the local retail market.

Two other small business owners who took a leap of faith and launched into unknown waters are Jon Untiedt and his wife, Terrie. The couple, recently married and moved to the area from Raleigh.

Jon had always wanted to own a brew pub, and Terri needed something to do with her time while she wasn’t working, so the two opened Brewtique, a coffee shop located in downtown Spencer.

The coffee shop has been open since July and there are plans to add craft beer to its offerings.

The two decided that “it was the right time. It was now,” Terrie said.
The Untiedts were specific in their choice of location because of the building’s proximity to the N.C. Transportation Museum and the fact that there was no coffee shop in Spencer.

“A couple of years ago, there were a lot of vacancies, but in the last two years it has really picked up,” said Paula Bohland, executive director of Downtown Salisbury Inc., the downtown economic development corporation.

She said a trend has been that more business owners are younger, and these young people are coming up with innovative ways to market their businesses.

AnnaCraig, a downtown clothing boutique that opened in early 2015, has a mobile store that is literally a boutique on wheels.

Bohland credits the variety of family friendly activities in downtown that continue to draw people to shops and restaurants.

Bohland added those who live in downtown will spend their money in the downtown area. “It’s a real stabilizer for downtown,” she said.

“While we have seen a number of new retail and restaurants opening, there is still a large amount of retail sales leaving our county,” Van Geons said.

County officials have said local residents spend more than $200 million per year shopping outside of Rowan County. The Shoppes at Summit Park is projected to keep some of that in the county.

Van Geons said he is optimistic that the county will continue to see new restaurants, hotels and retailers opening in the community. A number of restaurants and retailers, he said, have expressed an interest in locations along the Interstate 85 corridor, in downtown Salisbury, and across Rowan County.

“I think that over the next few years, we will see continued growth of our retail sectors. This will allow our citizens to meet their needs closer to home, while generating new jobs and tax revenue, which will benefit all of us,” Van Geons said.

The local market is really recovering from the recession of 2008, said Rowan Chamber of Commerce President Elaine Spalding.

She said people come to Rowan County to shop for everything from cars and other merchandise. She believes — and business owners have told her — consumers travel to Rowan County because of the customer service.

Spalding also said community events, especially those downtown, attract people. She spoke of the recent downtown events like the craft beer festival. There have also been music concerts at the mural, wine tasting crawls, and holiday after 5 events.