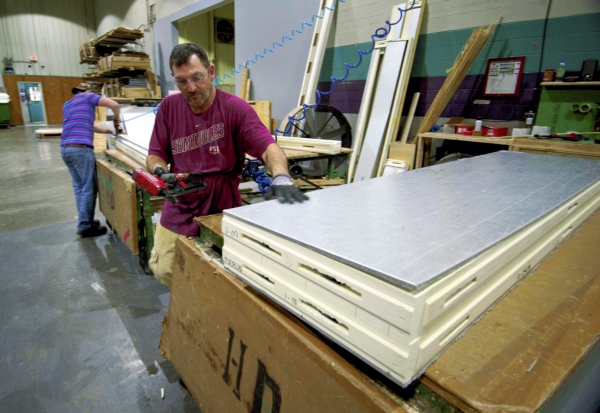 Greg Edds, chairman of the Rowan County Board of Commissioners, compares economic progress to building a house.

“The first few weeks of construction are not real exciting,” he said.

Right now, Rowan County is in the brush-clearing, foundation-pouring stage.

“Our hope is that really soon, we’re going to see walls start going up,” Edds said.

In the 2014-2015 fiscal year, more than 3,200 jobs were created and $240 million in investment was announced. Unemployment is at 6.3 percent, which is more than 50 percent less than it was at the end of 2009. New manufacturing, restaurant and retail companies have moved in. In fact, tourism spending has increased by 5.8 percent in the county, now representing $153 million of the annual fiscal impact.

Although some have shut their doors, it’s looking like companies and businesses are starting to see Rowan County as fertile ground.

Twelve companies have announced, completed or are in the midst of completing significant projects in Rowan County.

Robert Van Geons, director of RowanWorks, said Agility Fuel Systems moving into the area was one of the biggest signs of the county’s revival. The natural gas fuel systems manufacturer contracted to build a new 300,000-square-foot manufacturing headquarters in Salisbury, and the building was completed less than a year later. The company began hiring in June of this year and now employs 75 people. It plans to employ 250 by next spring.

Other companies have moved their operations to the area as well. Composite Panel Technology is creating sleeper cabs for Daimler Trucks in a new facility in Salisbury. New Sarum Brewery plans to finish a new facility next year, which will add 14 high-paying jobs and more than $2 million to the tax base. Granite Quarry has a new industrial park with 92 acres for additional industrial development. Over in Spencer, the Zoning Board of Adjustment approved a solar farm to be built along Hackett Street.

Two formerly vacant Salisbury buildings have been filled. JP Capital, a plastics extrusion and recycling company, expanded its operations into a building on Old Concord Road, and Bonded Logistics, a third-party logistics company, leased a building on Airport Road.

Companies that have already found a home in Rowan County have announced expansions and new projects.

Gildan Yarns, a subsidiary of Gildan Activewear, finished its second location in the county and added more than 365 jobs to the area. Integro Technologies, a machine vision integration company, added 20 high-paying jobs to its operation. Daimler Trucks added the Western Star Line to its Cleveland facility. Imperial Brown, a walk-in cooler and freezer manufacturer, has invested more than $2 million in new equipment and upgrades, along with adding more than 150 jobs since merging with Imperial Manufacturing two years ago.

According to the City of Salisbury’s Comprehensive Annual Financial Report for the fiscal year ending June 30, 2015, more than 90 percent of the first floor business and retail space in Salisbury’s downtown area was occupied. There was a net gain of 14 new downtown businesses and 16 facade renovations.

Paula Bohland, executive director of Downtown Salisbury Inc., said in an email that there was a net gain of 42 new full-time jobs and a net gain of 37 new part-time jobs in the last fiscal year. She also said that since July 1, 2015, at least six more downtown businesses have opened and four have expanded.

Some of the new businesses include Abigail’s Bakery, which has the perfect cake waiting on North Main Street, the Kitchen Store and More, which offers almost every kitchen item a heart could desire on Innes Street, and 10Thread, which offers collaborative office spaces and conference rooms on Fulton Street.

As far as big name retailers, Dick’s Sporting Goods, Hobby Lobby, Mattress Firm, Five Below and Kirkland’s, as well as newly opened Salsarita’s, have all moved into the Shoppes at Summit Park shopping plaza along Julian Road.

Edds said the new retail opportunities are decreasing the retail dollars that leave the county.

“For the first time ever, especially when you look at Christmas time, we have got choices here in Rowan County that we’ve never had,” he said.

Other big names coming in the near future include Breakfastime, a restaurant that people cannot seem to get enough of at its two other locations, and possibly Lidl, a popular German supermarket.

The future of Rowan County

As the county looks towards the future, Van Geons said there is a need to continue getting sites ready for potential new businesses.

“That’s our biggest challenge right now,” he said. “Our biggest hurdle is we just don’t have any real buildings of size available for companies, considering that 85 percent of projects start with a building.”

A part of that push for site readiness is getting the necessary infrastructure in place.

Edds said there is a lot of available land in the county, but without the necessary infrastructure, it’s virtually useless to incoming companies.

“You can have tens of thousands of acres of flat useable, available land, but if there’s no water/sewer to it, it’s nothing more than a nice corn field,” he said.

The necessary roadways, including the Interstate 85 projects and the Old Beatty Ford Road interchange, will have to be there, too. Edds said it looks like those projects are gaining momentum.

And many companies like to ship their product through the air, which is why developing the Rowan County Airport is so important, Edds said.

To keep up with the new industries coming into the area, the workforce has to be educated and trained.

Van Geons said it is vital for local Rowan County citizens to have the skills that the companies are looking for.

“We have to have the workers that our companies need,” he said.

Edds said moving from an unskilled labor force to a skilled one has been a big challenge for the county. He said the educational system needs to be able to respond to today’s economy, which is where organizations like the N.C. Manufacturing Institute steps in.

The Institute has been working to create the trained, certified production technicians that the manufacturing businesses are asking for.

Twenty-seven certified production technicians graduated from three, eight-week training classes held in June, August and September, and 20 of those graduates were hired within one month of the institute’s interview fairs.

In 2016, the institute is planning more interview fairs and opportunities for employees to receive certificates in safety, quality assurance, manufacturing process and maintenance awareness.

Both Edds and Van Geons think the county is becoming a place that businesses want to move into.

If economic progress is like building a house, then that house may be built and ready to move into sooner than we think.