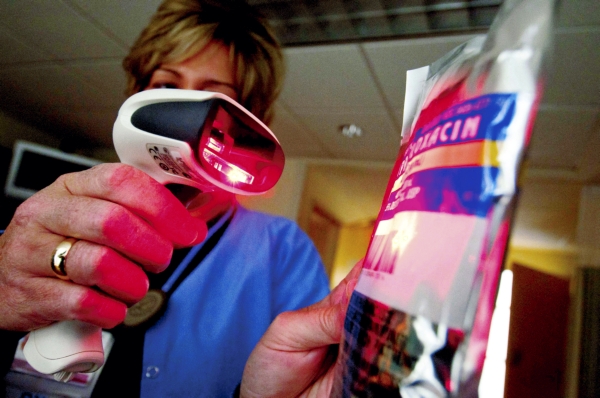 JON C. LAKEY / SALISBURY POST Technology upgrades to the Novant Health system include eletronic medical records. Nurses use a new bar code scanner to double check the medicines that are prescribed and reduces the risk of human error of incorrect dosage. Newest upgrades to the Novant Health Rowan Medical Center in Salisbury over the past year include adding technology, specialist, equipment and a list of new accreditations.

“We had a busy year,” she said during a recent interview.

And perhaps the biggest change the medical center implemented in 2015 was the launch of Dimensions, an electronic patient record.

“That was a total conversion from paper charts to electronic charts within the medical center,” Caldwell said.

Dimensions guarantees a single electronic record for every patient across the system. No more filling out new forms and histories at each doctor’s office — it’s all online.

All hospital staff and medical personal underwent training in the new program before its March launch date. Caldwell said the program went live at 4 a.m. one night — she and other administrative staff spent the night at the hospital, making rounds to ensure that everything went smoothly.

“It was just an awesome undertaking,” she said.

Throughout 2015, the program had scheduled down times — normally overnight on the weekends, to perform updates and weed out problems. Caldwell also said there was a bit of a drag in the Emergency and Surgical departments while medical personal strove to learn a new system while dealing with the same number of patients.

At the same time, nurses in the facility switched to barcoded medications.

“It’s the next generation of nursing,” Caldwell said.

Patient wristbands and medications are now equipped with a barcode. It’s a safety feature, Caldwell explained, to ensure that the right patient gets the right medication at the right time. A correct scan will automatically document that the medication was administered.

At the beginning of 2015, the medical center switched out its Emergency Department physicians and began contracting with a new group, Valley Emergency Physicians.

“Typically you don’t have to, you don’t want to change physician groups unless you just reach a point where you know you need to do something differently,” Caldwell said, “We just couldn’t get our outcomes to improve and felt that we had to make a change.”

Caldwell says that she valued Valley’s approach to patients and patient care, and says that they’ve help put several strategies in place to ensure that patients are seen in a timely manner.

Since Valley came on board, Caldwell says that patient approval ratings for emergency services have “skyrocketed.” In fact, Novant recently released a report, Caldwell says, that ranks Rowan as No. 1 in the system in terms of emergency department patient satisfaction.

“It’s sort of one of those stories going from ‘worst to first,’” she said.

Novant Health Rowan’s new Wound Care Center made its debut as an outpatient center on Mocksville Avenue. Wound care used to be located within the hospital, Caldwell says, but patients in need of its services did not need to stay overnight, and many had difficulty walking.

“So many of the patients who came to us for wound care had difficulty navigating or finding their way,” Caldwell said.

The new wound care center is located on the ground floor of Novant’s new professional services building, and allows patients to drive right up to the door. The center also features two hyperbaric oxygenation chambers to hyperoxygenate the cells to speed wound healing.

“The most prevalent wounds in our community are from diabetes, and wounds to the legs and feet from diabetes — and we want to prevent amputations,” Caldwell said, “We want to be able to heal those wounds so that people don’t lose their limbs. That was one of the reasons we brought in hyperbaric, was because there’s a great success with that.”

The medical center also purchased a 3D mammography unit, which was unveiled at the end of 2015. Funds for the machine were raised locally through the Cannon Foundation, the Cannon Charitable Trust, the Patron’s Ball and the Giving Campaign.

“It belongs to the community,” Caldwell said.

The new unit is particularly helpful in detecting the presence of tumors among women who have dense breast tissue, she said. Caldwell hopes that soon all of their mammography units will have 3D capabilities.

July 2015 also saw the first round of medical students from Campbell University. It’s a partnership that’s been working very well, Caldwell says. The students are in their third year of medical school and will work with attending physicians at Novant Health Rowan through their fourth year.

It takes extra work on the part of Novant physicians, and can be draining, Caldwell says, but the physicians have risen to the occasion.

“It takes a lot of energy to teach,” Caldwell said, “And while the students can help them do histories and physicals and things like that with patients, our doctors are very committed. I mean they’re not just babysitting these students, they are very committed to being up to date on what their curriculum is, their reading assignments and making sure the students are getting all the experiences that they need — and they take it real personally.”

Caldwell says that personal experience is what makes Novant Health Rowan such a desirable location for medical students, getting to work directly with an attending physician rather than a resident. She says she heard from Campbell that Rowan was the number one request from medical students.

Caldwell hopes that the partnership will turn into a recruitment tool. Novant Health Rowan conducted a manpower study last year indicating that in 2020, the Salisbury-Rowan area will be short 40 primary care physicians.

“That is a real need that we have,” Caldwell said.

Within the community, Caldwell says, Novant Health Rowan has been partnering with Livingstone College to start a health and wellness coaching program, funded by a Duke Endowment Grant. It was the brainchild of Dr. Jimmy Jenkins.

“The idea being that when they graduate with a four-year degree, their health status is markedly improved from what it might have been when they came in,” Caldwell said.

In 2015, Novant Health Rowan also hired a vascular surgeon, Dr. Martin Carignan, and a breast specialist. A new urgent care clinic opened in Manning Park off of Jake Alexander Boulevard. The hospital also received several accreditations including being named a Primary Stroke Center, being named a Baby Friendly Facility by Baby Friendly USA, and being named a Comprehensive Community Cancer Center and a Center of Excellence for its weight management and bariatric surgery program by the American College of Surgeons.

And 2016 “should be a good year” for the facility as well, Caldwell says. The hospital is looking at new bariatric procedures, expanding medical personal in infectious diseases, OBGYN, vascular surgery and neurology departments. There are also plans to open a rehab clinic in the South Rowan YMCA and a satellite clinic in Albemarle.

“I think it’s phenomenal, it’s exciting,” Caldwell said, “I love being able to bring new services to the community — that’s what our mission is, to serve the needs of the community.”

Spirit of Rowan: Rowan no exception to state’s solar…