Soaking up the comforts of African-American foods 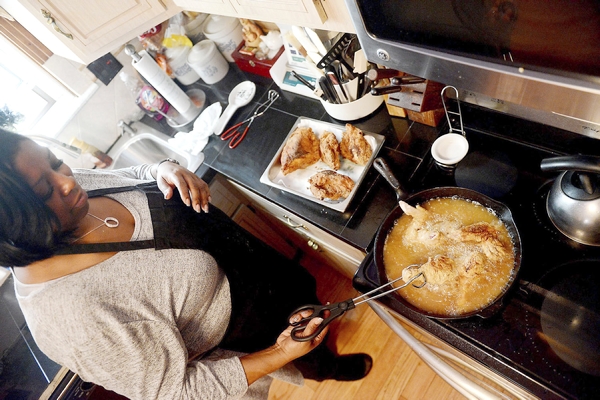 African-American foods bring comfort by being down-to-earth and heavenly at the same time.

While cookbook authors and home chefs hang on to recipes that were handed down from their grandmothers and mothers, they also improvise on the classics. Fried chicken that was once seasoned with only salt and pepper gets flavored with garlic and onion powders and a host of other spices. Grits are served plain or with shrimp and even tomatillo and squash. Vegetable shortening is replacing lard in some recipes, and smoked turkey is being used instead of ham in greens to meet changing tastes and dietary needs.

Before the days of refrigeration, stews were a way of stretching foods in the house and not wasting anything. Over time they are still a way of using leftover vegetables and meats and have gotten richer in flavor with the addition of heavy cream to an oyster stew or half-and-half to a corn soup.

Sweet potato pie, also known as potato pie, remains the queen of desserts and is a must-make for any holiday. The tubers are either baked or boiled and redolent with nutmeg, cinnamon and all-spice. Vanilla, lemon and imitation rum extracts are added in some cases for more flavor. Pound cake is an all-occasion dessert and served plain, dusted with powdered sugar, with fruits and ice cream or sauce.

It’s important to remember African-American cooking is not monolithic. “It is nuanced and is different from region to region depending on the availability of ingredients, cooking techniques and socio-economic bracket,” says author and food historian Jessica B. Harris.

When stand-up comic Lillian Cannon of Broadhead Manor fries chicken, she starts by cooking the bigger pieces before the smaller ones and places the meat skin-side down. If she is in a rush, she coats the chicken with a quick seasoning by combining Lawry’s season salt, black pepper, Creole seasoning and garlic powder.

Preheat oil in a deep cast-iron pan. Rinse chicken pieces, pat dry and then lay them flat on a cutting board.

Season chicken with premix seasoning and let sit for about 1 hour.

Place chicken pieces in a resealable plastic bag. Pour in the buttermilk and beaten egg.

Mix flour and cornstarch in a bowl and then pour the flour mixture into a second resealable plastic bag.

When oil is hot (test by dipping a wooden spoon in the oil; if oil starts to boil around the spoon, it is hot enough), add the meat pieces. After the bottom side of pieces turn golden brown, flip them over so that other side turns golden brown. Then flip the pieces two more times.

Carefully remove pieces with a pair of tongs, shaking off the excess oil, and place them in a pan lined with paper towel.

This pie recipe from Niara Sudarkasa, the first woman to serve as president of Lincoln University in Oxford, Chester County, is delicious, aromatic and perfect in every which way. Why should one go for a sweet potato pie loaded with fat and sugar when 1 1/2 tablespoons of butter and 3/4 cup of brown and white sugars can do such wonders?

Reduce oven temperature to 350 degrees. Bake 30 to 35 minutes or until set and knife inserted in center comes out clean.

Mark Twain has said: “No bread in the world is quite as good as Southern cornbread, and perhaps no bread in the world is quite so bad as the Northern imitation of it.” It would be a sin to buy cornbread mix when you can make a memorable one like this one from scratch. For a well-browned and crisp exterior, it is best to bake it in a cast-iron skillet.

Add butter to an 8-inch cast-iron skillet and place in oven for about 10 minutes.

Combine cornmeal, salt and baking powder in a large bowl. Whisk together well. Stir in buttermilk and egg.

Remove pan from oven. Carefully, pour hot butter into the cornmeal mixture. Whisk together well. If using cracklings, stir them in.

Pour batter into the hot skillet. This ensures a deep brown crust.

Place in middle rack and bake for 45 minutes. Serve warm.

When I saw the ingredients for the recipe — eight eggs, no baking powder, 1 pound of powdered sugar and no granulated sugar — all I could say was, “what the what?” But the cake turned out to be ethereal and fabulous. Cookbook author Dora Charles says, “Follow step by step, and it will be like no other pound cake you’ve ever eaten.”

8 large eggs, separated while cold, then brought to room temperature

In a large bowl, cream butter until light and fluffy. Slowly add powdered sugar and beat for several minutes, until the mixture is satiny. Add sour cream, vanilla and lemon extract or juice and zest and mix well.

Sift flour and baking soda. Add 1 cup of flour mixture to the butter and mix in well. Then mix in half the egg yolks. Mix in another cup of flour and the remaining yolks. Add the rest of the flour. Don’t overmix, or the cake will be tough. Do the final mixing by hand.

In a large bowl, with clean beaters, beat egg whites to stiff peaks. Gently add whites to the batter, folding them in with a spatula — just barely mix everything together.

Bake for 30 minutes. If the cake is getting too brown on top, turn down oven to 300 degrees, then test again in 15 minutes. The cake is done when the top springs back when lightly touched and a toothpick inserted into the center comes out clean, about 45 minutes to 1 hour in all.

Cool on a rack for 15 minutes, then run a knife around the rim and center tube and invert the cake onto the rack to cool completely.

Transfer cake to a serving plate or a cake stand. Dust with confectioners’ sugar.

Carleen King of Carmi Soul Food Restaurant got the idea for this recipe after she had shrimp and grits for the first time. She uses stone-ground grits.

To prepare grits: Heat water and salt in a heavy-bottomed saucepan until just simmering. Stir grits into the water.

Cook, stirring often, until grits are tender to the bite and have thickened to the consistency of creamy oatmeal, for about 20 minutes.

As grits thicken, stir more often to keep them from sticking and scorching. When done, remove from the heat and stir in 3/4 cup cheddar cheese.

To prepare shrimp: Melt butter in a pan over medium heat. Add onion and green pepper. Saute until onions are transparent.

Add shrimp; cook until firm and pink, for about 2 minutes.

Sprinkle seasoning on shrimp and continue to cook for 1 minute.

Restaurateur Carleen King says she improvised her grandmother’s recipe, which called for cooking the pork chops in brown onion gravy for 40 minutes on simmer until the meat fell off the bones, so that the kitchen could meet the needs of the other items on the menu.

Fry pork chops in vegetable oil on medium heat until golden. Don’t worry about cooking through because they will be cooked again later. Set pork chops aside.

To make gravy, use oil that the pork chops were fried in, and saute remaining 1/2 cup flour until brown. Stir constantly. The darker you brown the flour, the richer the gravy color will be.

When flour reaches desired color, add water or chicken broth and stir constantly while gravy thickens. Bring gravy to a full boil, then reduce heat to low. Don’t worry if gravy mixture is a little lumpy, it will smooth out while simmering.

Add pork chops and simmer on low for 20 minutes.

LEGOs are much more than building blocks